From an ecologist's nightmare to a mathematician's dream

"Since you are a computer scientist, I have an optimisation problem for you!", my colleague said, half jokingly. As an ecologist, one of the things my colleague studies is invasive plant species. The question he was facing is how to reconstruct the most likely routes along which these species travel when they invade new territory, based on historical records on when and where they first appeared. As it turns out, this question is an instance of a known mathematical optimisation problem called the minimum cost arborescence problem. 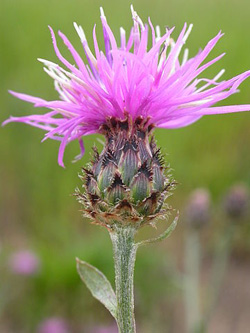 Due to increased human activity and mobility, many invasive species have been introduced to various parts of the world. Examples are possums in New Zealand, rabbits in Australia, and spotted knapweed in North America. Spotted knapweed (scientific name: centaurea stoebe) is considered a pest in North America, outcompeting many native species. It was most likely brought over from Europe on ships in the late 19th century. In fact, there were at least two introduction sites: one on the east coast near Boston, and one on the west coast near Vancouver.

My ecologist colleague was interested in reconstructing the most likely dispersal routes of spotted knapweed after its (dual) introduction in North America. He already had data on when this species was first observed in many different locations across the continent, but did not know how to analyse this data mathematically to get the result he wanted. The key to the problem is a mathematical object known as a minimum cost arborescence.

(called the root) that has only outgoing arrows. Every other node has exactly one incoming arrow (and any number of outgoing ones). As a consequence, there is always a unique directed path from the root

to any of the other nodes. Technically, an arborescence forms a directed rooted tree.

Now suppose you are given a directed graph

with a root node

that has only outgoing arrows. Imagine that each arrow in this graph has a number attached to it — you could interpret this number as the cost which something that travels along that arrow has to pay.

is a subgraph of

, consisting of all the nodes of

(including the root node

) and some of its arrows, which is an arborescence, and for which the sum of the costs associated to arrows is as small as possible. Here is an example: 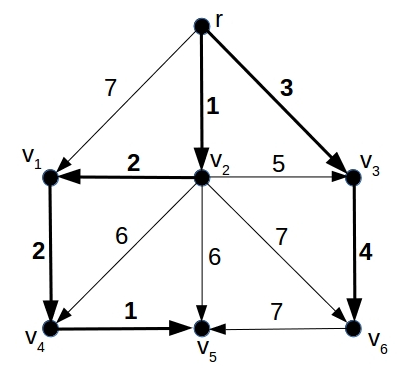 Given a directed graph

with a root and a cost function, there are algorithms that find you a minimal cost arborescence in a reasonable amount of time (for experts, the problem is in the complexity class P). Such algorithms were proposed independently first in 1965 by Yoeng-Jin Chu and Tseng-Hong Liu (who called it a shortest arborescence), then in 1967 by
Read more about...
ecology
graph theory
tree
arborescence
mathematical modelling
Tweets by plusmathsorg