And the winner is...

We are delighted to announce the winners of the Plus new writers award 2009 in this issue of Plus! Now in its third year, the award attracted the usual flood of fascinating articles on all aspects of maths. It was very, very difficult to choose just one winner and one runner-up in each of the three categories: secondary school students, university students, and the general public. But, after much deliberation the decision was made with the kind help of our three eminent judges, David Spiegelhalter, Winton Professor for the Public Understanding of Risk at the University of Cambridge, Geoffrey Carr, Science Editor of The Economist, and Julian Havil, mathematics author and teacher.

Reflecting the wide range of topics covered by the entries, the winning articles explore the most beautiful equation of them all, grapple with apparent patterns in the Universe, explain the credit crunch, indulge in mathematical needle work, journey into higher dimensions, and unveil the curse of good looks.

A big thank you to everyone who took part in the competition. If you didn't win this time, then don't despair — the next competition will be launched in Plus very soon. 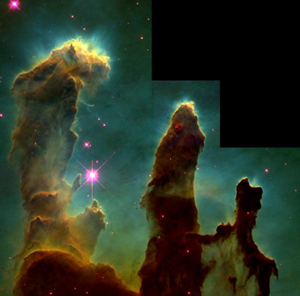 Gas pillars in the Eagle Nebula: One of Hubble's most famous images. Image courtesy NASA.

The rest of this issue of Plus is special for another reason, too: we explore and discover the frontiers of modern physics! Put together with kind support from the Science and Technology Facilities Council, the issue explores some of the biggest current topics in the field, from the search for alien life in space and exotic particles in the LHC, to the most important discoveries of the Hubble Space Telescope, a mind-boggling prediction of string theory, and one of the biggest mysteries of them all: the quest to explain the cosmological constant. We also answer the most popular question from our last on-line poll in honour of the International Year of Astronomy 2009 — are the constants of nature really constant? — and find out how visual effects specialists bring physical impossibilities to the big screen, while still making everything look realistic.

These topics may seem like a departure from our usual content, but they're not — whether it's Hubble's discoveries, the interaction of fundamental particles, or software for creating computer generated movies — each is expressed in the language of mathematics. In fact, mathematical structures often lead the way to new physical theories: many physicists prefer a mathematically beautiful theory to a messy one, and allow themselves to be led by mathematical elegance. This partly explains the lasting appeal of string theory, a mathematically beautiful, but completely hypothetical theory.

Most articles in this physics issue focus on esoteric questions, rather than the physics we come across everyday. They may be what keeps physicists awake at night, but why should we care? Well, many theories that initially seem unimportant in an everyday kind of sense later prove surprisingly useful: we need to understand general relativity to make GPS work, and gadgets that have emerged from quantum theory include lasers, microchips, mobile phones and MP3 players. Subatomic particles that were once considered figments of crazed physicists' imaginations are these days responsible for routine devices such as PET and MRI scanners. And anyway — some things are worth pursuing purely for the pleasure and thrill of discovery.