Fight Ebola with your computer

You can now join the fight against Ebola even if you have no medical expertise, time or money to spare. All you have to do is donate your spare computing power to researchers at the Scripps Research Institute (TSRI). The idea is to form a virtual supercomputer, made up of the donated computing power of (hopefully) tens of thousands of volunteers, which will screen millions of molecules that might be used to disable the virus. The best candidate molecules can then be tested physically in the lab, perhaps modified to perform better, and may ultimately lead to anti-viral drugs. 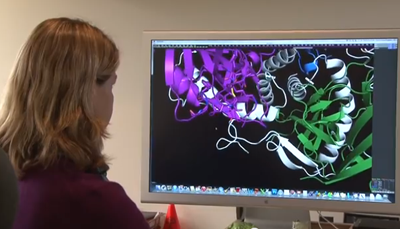 The Outsmart Ebola together computing project works via an app you can download onto your computer or Android-based phone. It won't interfere with what you're doing because it only uses your device's time when it's idle — while you are having a nap, watching a movie, or just not bothering to use it. The project uses IBM's World Community Grid which has been involved in similar data-driven initiatives before. Projects including fight AIDS@home and GO Fight Malaria (also developed at Scripps) have benefited from nearly three million computers and mobile devices used by more than 680,000 people and 460 institutions from 80 countries.

The project's software takes virtual models of candidate molecules as input and compares them with molecular structures of the Ebola virus, which have only recently been understood. It compares the structures in all orientations against each other and calculates the binding affinity, which gives information on how a molecule might interact with the Ebola virus. "Our molecular images of the Ebola virus are like enemy reconnaissance," said Erica Ollmann Saphire of TSRI. "These images show us where the virus is vulnerable and the targets we need to hit." This is pretty much the same thing that researchers would normally do in test tubes in the lab, but because it's being done virtually on a computer, using free computing time, it's a lot faster and cheaper.

Medicine isn't the only science that has benefitted from crowdsourcing. Galaxy Zoo has been asking volunteers to stargaze for science since 2007, a game called Eyewire is being used to map the human brain, and SETI@home, uses donated computer time to search for extraterrestrial messages in the data from radio telescopes. Even maths has been in on the game, with the Great Internet Mersenne Prime Search (GIMPS) using volunteers' computer time to find ever greater prime numbers.

The GIMPS project may appear a little frivolous compared to the efforts to fight Ebola — but that's no reason to dismiss maths. Mathematical models are essential in understanding and predicting how the disease spreads (see Ebola: Evidence from numbers) and maths also underlies the software used in the Outsmart Ebola together project. In the fight against Ebola, as well as other diseases, maths is an invaluable tool.