The Great Internet Mersenne Prime Search (GIMPS) has done it again! The project has just discovered the largest known prime number: 257,885,161-1. This massive 17,425,170 digit number, was discovered to be prime (ie. divisible only by 1 and itself) on 25 January on the idling computer of University of Central Missouri mathematician, Curtis Cooper. As well as a handy $3000 in prize money, Cooper and his university reclaim their position at the top of the GIMPs ladder from previous record holder, UCLA. 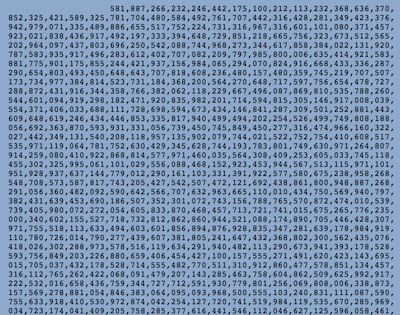 After 17 years, GIMPS is the longest running grass-roots supercomputing project, using the spare processing power of computers to slowly chip away at the fiendishly difficult problem of finding new prime numbers. (You can read about other similar projects in Charity begins at home.) Thousands of volunteers, such as Cooper, download software that runs on their computers in their idle moments. The software searches among all the Mersenne numbers – those of the form 2p-1 where p is also prime – and tests if each number is prime. It does this using clever algorithms that divide the task up into many little pieces, each piece running on any one of the volunteer's computers in whatever computing time they have available.

So this remarkable achievement is not Cooper's alone. Credit must go to George Woltman, the founder of GIMPS, who also developed the software, and to Scott Kurowski, who created and maintains the PrimeNet system that cleverly coordinates all the computers running the software. And of course all those thousands of GIMPS volunteers that sifted through millions of non-prime candidates also deserve their share of the glory. (Find out how you can help discover the next Mersenne prime!)

Although the Ancient Greeks proved there were infinitely many primes over two thousand years ago, understanding these building blocks of mathematics is still a dynamic area of current research. Just a few years ago Ben Green and Terence Tao proved the significant result that you can find arbitrarily long sequences of prime numbers that are the same distance apart. And many other questions remain unanswered: is every even number greater than four the sum of two odd primes (known as Goldbach's Conjecture)? Are there infinitely many twin primes? And of course prime numbers are now part of our everyday lives, providing the security that enables our digital lives.

It has been over four years since the last discovery of a Mersenne prime and it will likely be some time until we find the next one. Checking whether a number is prime becomes harder as the size of the numbers increase. And of course, there is the fundamental problem that makes all prime numbers hard to find: there is no strong pattern in where they appear within the other numbers. Understanding this missing pattern underlies the Riemann Hypothesis, one of the greatest unsolved problems in mathematics. The hunt for prime numbers and our quest to understand them is far from over.

'Is every prime greater than

'Is every prime greater than 4 the sum of two odd primes (known as Goldbach's Conjecture)?'

I think you mean 'even number' rather than 'prime'!

Oops, you're right, we meant

Oops, you're right, we meant even number. Thanks for pointing it out, we've corrected the mistake.