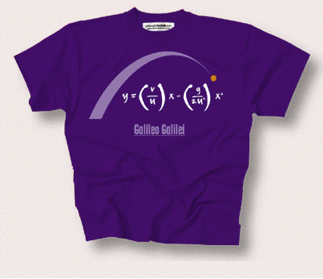 Football fashion for the sophisticated.

In the final moments of a drawn match, Stephen Gerrard crosses the ball, 30 metres from the far goal post. He kicks the ball with a horizontal velocity of 6 metres per second and a vertical component of 25.5 metres per second. Peter Crouch, lurking near the far post, jumps to head the ball...

At what height above the ground does Crouch's head meet the ball?

Thanks to Marcus du Sautoy, not only can you solve this problem: you can wear the solution on your T-shirt. 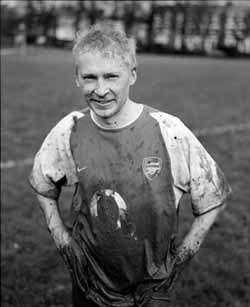 Marcus divides his interests between mathematics and football. He is a research mathematician, working in number theory, and he is also well known as a populariser of mathematics who appears on radio and television. His book The Music of the Primes tells the story of one of the most baffling questions in the whole of mathematics, the Riemann Hypothesis, which relates complex functions to prime numbers.

Marcus also plays football, and is a committed supporter of Arsenal. His favourite player is Sol Campbell, partly because he wears the number 23 shirt and this is a prime number. Admittedly, this connection between prime numbers and football is not terribly significant. But another connection between mathematics and football is so important that Marcus has persuaded philosophyfootball.com to make a purple T-shirt, which displays the most important formula in football:

together with the name "Galileo Galilei".

What's all that about, then?

The easiest bit to explain is the colour. Galileo lived in the Italian city of Florence, and this particular shade of purple is the home colour of the Italian football club ACF Fiorentina. Galileo was a scientist who discovered the laws of motion — the mathematical equations for moving bodies. He was born in Florence in 1520, the son of a music teacher. Galileo was one of the first people to find mathematical patterns in the natural world. He carried out experiments, rolling a ball down a slope and measuring how far it went at various times. This wasn't easy, because there were no good clocks or watches in those days, so he used the beat of his own pulse, and hummed music to himself.

One of his most important discoveries was that an object falling under gravity accelerates at a constant rate. This mathematical pattern in the force of gravity implies that any object thrown — or, in the case of a football, kicked into the air, follows a mathematical curve known as a parabola.

A parabola is a special U-shaped curve (in this case the U is upside down) which was known to the ancient Greeks. The formula on the T-shirt tells us how the horizontal x and vertical y coordinates on this curve are related for a football that is kicked in such a way that the vertical component of its velocity is v and the horizontal component is u. The symbol g stands, as usual, for the acceleration due to gravity.

Marcus points out that "Once you know the incoming ball's horizontal velocity u and vertical velocity v, just set y to be the perfect height off the ground for your volley or header and then solve for x to discover where you should position yourself." Alternatively, you might know x and y, and (say) u, in which case you can calculate the necessary velocity component v.

Of course, professional footballers develop an instinctive feel for such matters, and seldom have time to whip out a calculator in the heat of battle, but football is only one application of Galileo's discovery.

Here's one way to derive the formula. I'm assuming you are familiar with the basic equation for motion with constant acceleration. Namely:

where s is the distance travelled, t is the time taken, V0 is the initial velocity, and a is the acceleration.

For the vertical component of the motion, we replace a by g, since the acceleration is due to gravity, V0 by v, and s is equal to y, so

For the horizontal motion, we have to replace V0 by u, the component of velocity in that direction, and now a = 0 since there is no horizontal acceleration. This time, s is equal to x. Therefore

solving this equation for t, we get If you insert that expression for t into equation (1), you end up with the formula on the T-shirt. 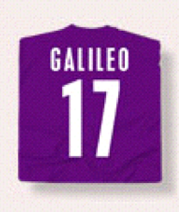 which is a comfortable height for heading a ball. Especially if you are Peter Crouch.

By the way, according to Marcus, Galileo wears shirt number 17 — because 17 is prime.

Ian Stewart is Professor of mathematics at Warwick University and is widely known for his popular science writing on mathematical themes. He has won many awards, including the Royal Society's Michael Faraday Medal, the Gold Medal of the Institute for Mathematics and Its Applications, and the Public Understanding of Science and Technology Award of the American Association for the Advancement of Science. He has published over 60 books including Nature's Numbers, Does God Play Dice?, Letters to a Young Mathematician, and the bestselling series The Science of Discworld I, II, and III (with Terry Pratchett and Jack Cohen).

He is the mathematics consultant for New Scientist, and has been a consultant for Encyclopaedia Britannica. For ten years he wrote the monthly Mathematical Recreations column of Scientific American. He has appeared on numerous radio programmes and presented How Will It All End? for Channel Five television. He is also an active research mathematician, and his present field is the effects of symmetry on dynamics.