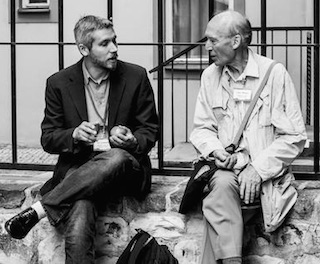 Tim Koslowski with Julian Barbour, at the 100 years after Einstein meeting, in Prague. (Credit: Jakub Haláček)

Imagine that you could see your life in rewind: You would slide into bed each morning with the ring of your alarm clock. At bedtime, you would gently drift awake. In the evening, you would un-cook your dinner, transforming a plate of Tuesday spaghetti into raw noodles and cold water. Your morning coffee would spontaneously warm in its mug as it sat on the countertop, the steam drawing out of the air and back into your cup. Another day begins, and you're younger than the day before.

Needless to say, this never happens in our universe. The "arrow of time" only goes one way: forward. Yet the fundamental laws of physics run perfectly well on rewind—microscopic processes are just as likely to occur backwards or forwards. So understanding how this temporal direction materializes from laws that seem indifferent on the matter is one of the great puzzles of physics. Now, with support from a grant of almost $US 140,000 from FQXi, Flavio Mercati at the Perimeter Institute (PI) in Waterloo, Ontario, and Tim Koslowski, at University of New Brunswick, Fredericton, along with co-investigator Julian Barbour, of Oxford University, UK, are pursuing an alternative hypothesis that casts gravity as time’s archer.

Physicists have traditionally argued that the arrow of time emerges not from gravity, but from entropy, which is often described qualitatively as "disorder." According to the second law of thermodynamics, the entropy of an isolated system can never decrease. You can scramble an egg into an omelet, but you can't unscramble an omelet to make an egg: that's the essence of entropy. More precisely, entropy is actually a measure of the number of ways you can rearrange the components of a system without changing its large-scale appearance. Move one book on a well-ordered, low-entropy library shelf and the librarian is sure to notice; rearrange the board books strewn around in the high-entropy kid's section and no one is the wiser.

Although pockets within a system may grow more "ordered" over time—galaxies, stars, and planets coalesce; a mass of cells grows into a human being—when you look at the whole shebang, it can only get messier. But there is a problem with identifying entropy as the driving force behind the arrow of time. For this to be true, the universe must have started out in a very low entropy state. The puzzle is: why? "If you are in a universe that started out with very low entropy initial condition, then there will definitely be a preferred direction in which entropy grows," says Koslowski. "But where does that initial condition come from?"

"As structures start to form you see that these physical rods and clocks form so that time seems to move away from that point in the past."
– Tim Koslowski

One possible answer is that the universe's ideal low entropy initial state was just a fluke. Almost a century and a half ago, physicist Ludwig Boltzmann pointed out that, if you wait long enough, you will see large fluctuations in entropy: a very low entropy state is bound to come along eventually. Contemporary mathematical physicist Roger Penrose applied Boltzmann's idea to cosmology, arguing that what we call the Big Bang was just a lucky statistical fluctuation that provided the right low-entropy conditions for our universe to evolve.

But many theorists are uncomfortable putting our entire universe down to luck. Koslowski points out that the second law of thermodynamics and other statistical laws were derived by considering specific "closed" systems, which do not allow matter in or out, within the universe. But, he says, it's not clear that the same rules should apply to the universe as a whole.

Indeed, our observations of the universe's evolution seem at odds with the prevailing entropy narrative. Intuitively, it seems that the "hot cosmological soup" that pervaded the cosmos after the Big Bang should have higher entropy than the elaborate filamentary structure of today's universe. "We really don’t have control parameters for the universe," says Koslowski. "It is just pushing the second law of thermodynamics beyond its original domain of applicability into an arena in which it is not clear that it should hold."

The Shape of Things to Come

While the relational approach traces its history back more than a century, in recent years it has been championed by Barbour. (See "The Non-Expandng Universe.") Koslowski's interest in shape dynamics began with a 2008 talk Barbour delivered at PI, where Koslowski was barely a week deep into a postdoc. "That really struck a chord with me, and I saw that many questions that I had been thinking about, and observations that I had made, really fit well with these ideas."

The connection between gravity and time's arrow became apparent when Mercati and Koslowsi began applying shape dynamics to a classic puzzle in Newtonian physics called the n-body problem: How will a group of n objects move with respect to one another due to the force of gravity between them? The simplest n-body problem includes only two objects: the Earth and its moon, for example. Such two-body problems can be solved completely using just paper and pencil. But as more objects are added to the mix, the researchers had to turn to computer simulations to solve the problem. 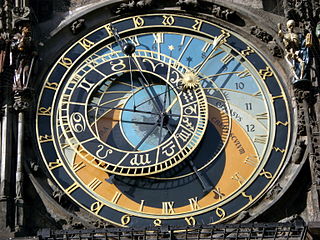 Mercati and Koslowski began with a well-understood analytical solution to the n-body problem and translated it into the language of shape dynamics, stripping it of references to measurements based on external scales and replacing them with relational ones. They found that the system inevitably evolves from a random distribution of particles—what Barbour describes as a "swarm of bees"—toward structured groupings. As it does so, its complexity (a number that quantifies how much structure there is in the system) always grows.

In this view, gravity drives complexity, and complexity draws the bow on the arrow of time. To see this, you identify the earlier random state as the past. Until complexity arises, time simply doesn't exist. As Barbour told Zeeya Merali in an interview recorded for a recent FQXi podcast, this view transforms the big bang from a violent fireball into "the most benign, gentle state of affairs that you can imagine" because at this point, the universe does not contain any complex structures. When shape, not size, drives the action, the big bang becomes the "least interesting place in the universe," said Barbour.

One Past, Two Futures

You can hear Julian Barbour's proposal for a gravitational origin for time in this podcast from FQXi.

Though Koslowski, Mercati, and Barbour aren’t the first to suggest that the arrow of time could be driven by gravitational clumping, their work puts the idea on "firm footing," says Lee Smolin, a theoretical physicist at PI. "I would never have guessed it could be done so well, and its very compelling the way that shape dynamics comes in." (See "Real-Time Physics" for Lee Smolin's take on time.)

George Ellis, a theorist at the University of Cape Town, who is pursuing a different approach to understanding the arrow of time, considers the new work "very well done and thought provoking," though he is skeptical that it provides a faithful model of the universe's origin and evolution. "The system the team considered is too narrow to be generalized to the whole universe, where the laws of electromagnetism and quantum theory, for instance, must also be accounted for," says Ellis. (See "The Crystallising Universe.")

The approach does give gravity special status among the fundamental forces, says Koslowski. "In fact," says Koslowski, "the emergence of an a priori arrow of time, like ours, would not occur in a universe that is not dominated by gravity."

Complexity is "turning entropy on its head," Barbour told Merali. If the entropic arrow of time describes a universe born in a fluke and evolving toward chaos, complexity offers a more optimistic view: a cosmos in which fundamental forces conspire to produce the intricate anatomy of the cosmos we call home. As Barbour said to Merali: "This is the miracle of gravity. Gravity creates this. It’s the ancient Greek dream of order being created out of chaos."

This article first appeared on the FQXi community website. FQXi are our partners in our Stuff happens: the physics of events project, within which we explored the nature of time. Click here to find out about the different views of time in cosmology.