In the five minutes it takes you to read this article, 10 children will die in Africa from malaria. It's a horrifying thought, but you and your computer can do something to help. Take part in research and help defeat malaria by donating your spare computing power to Africa@home — a distributed computing project that runs mathematical simulations of how malaria is spread. This research will help to find the best way to deliver vaccines and interventions such as mosquito nets to control the transmission of the disease and save lives. 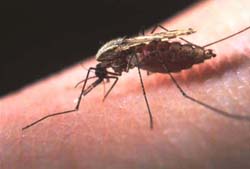 Malaria is responsible for a million deaths every year in sub-Saharan Africa, and is the single biggest killer in children there under five. It is a parasitic infection that passes to humans through the bite of an infected mosquito. The parasite has a complex life cycle, undergoing several changes once inside a human host until it can be passed back to mosquitoes biting the infected person. Victims of malaria get flu-like symptoms (vomiting, headaches, fever) but it can become fatal, attacking the red blood cells, and by blocking the capillaries that take blood to the brain and other organs.

There are some treatments for malaria, mostly taken to prevent infection, such as chloroquine tablets which you might have taken before a holiday to countries in Africa or Asia. Other preventative measures, such as mosquito nets treated with insecticide, can have an impact on the spread of the disease. And despite the difficulty of attacking an infection that goes through as many forms as malaria, vaccines are finally being developed and tested in clinical trials.

But clinical trials can only uncover the short-term effects of a treatment. The vaccine may not be as good as it seems, it may simply delay death for example, or it may have positive benefits like improving the immunity of the community in some cumulative way, but these effects would not become apparent for a long time. If the clinical trials miss these effects, the resulting assessment of the vaccine may be more positive, or negative, than its real impact warrants. 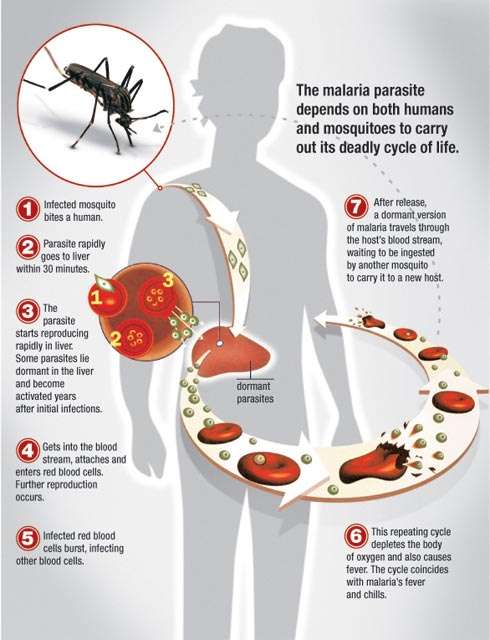 The complex lifecycle of malaria — image from malariahotspots.co.uk

MalariaControl.net is a mathematical model developed by researchers at the Swiss Tropical Institute that simulates the spread of malaria. It is a set of related submodels simulating different components of the transmission and impact of the disease. The equations involved describe how the infection is passed to humans, simulate the infection within the host, how it is passed back to mosquitoes and the likelihood of sickness and death. Parameters include the average body surface area of a person by age (the larger your body surface area, the more mosquito bites you can expect which will affect your chances of catching malaria), seasonal transmission rates (rain gives mosquitoes more places to breed, and the development of the mosquito larvae and malaria parasite is regulated by temperature), and the levels of infection within the host in all it's different life stages. These mathematical models are stochastic — they move through time, step by step, generating probabilities for the possible outcomes at each stage.

Because the model simulates many of the components of the transmission of the disease in an integrated way, it offers the opportunity to simulate the complex effects interventions such as vaccines could have on the spread of malaria. It can incorporate measures like providing mosquito nets or vaccination programmes and simulate the impact of these interventions over long periods of time. This more complex model of these interactions is more realistic than previous attempts, but requires vast computer resources to run.

And that is where you come in. Like SETI@home and GIMPS (read more about these on Plus), idle processing power of computers like yours or mine can provide the computer power needed by Africa@home, a research project based at CERN. You can download MalariaControl.net to your computer, and while you are making that cup of tea or watching the world go by your window, your computer can be playing its part in perfecting the mathematical model of malaria transmission in Africa.

Using the donated computer power the simulations will be run many times with slightly varying starting points. This technique, called ensemble forecasting, provides more realistic predictions from models of very complex systems, and has previously been used in weather prediction and climate change modelling. The researchers explain, in the August issue of The American Journal of Tropical Medicine and Hygiene, that if predictions from MalariaControl.net remain "substantially unchanged across a range of different sets of assumptions" we can be more confident that they are a realistic picture of the future. 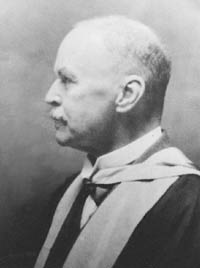 There is a long history of using mathematical models to assist in decisions about the control of infectious diseases. Malaria was one of the first diseases to be tackled this way, with the English mathematician and doctor Ronald Ross developing the first mathematical model for malaria nearly a century ago. The team behind MalariaControl.net believe it is the "most comprehensive population-based simulation of malaria yet developed", and integrates both the epidemiological and economic considerations affecting strategies to control the disease.

It is expected that most of the volunteers of computer time will be based in the developed world, but an important part of the project is the involvement of African scientists in this research. A group of researchers from Mali, Bamako and Cameroon are part of the project team at CERN, and future Africa@home projects plan to enable researchers in Africa to setup and run their own distributed computing projects.

Africa@home is offering many people the chance to be a part of groundbreaking research that can save lives in Africa. Why don't you become one of them?