How not to catch a sunbeam

"It's in one piece... it's on the ground... that's a good thing," said Dr Ian Franchi, putting on a brave face when he realised the long-awaited Genesis capsule had crashed to Earth. 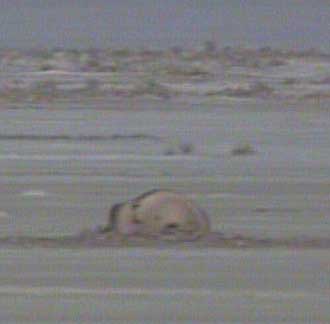 The capsule contained the first extraterrestrial sample since the Apollo missions in the 1970s, a sample of the solar wind gathered over two years from beyond the moon. The collector plates holding the sample were so fragile that they weren't thought able to withstand a landing on the ground or in the sea. Instead, the capsule was supposed to be snatched dramatically in mid-air by helicopters piloted by Hollywood stunt pilots, hooking the parachute that would also slow the capsule's descent. But, unfortunately, it appears that the parachute never opened. Instead, the disc-shaped capsule span out of control through the atmosphere, finally becoming embedded in the Utah desert.

The Sun loses mass through the solar wind - particles from its surface whistling off through space at 400km per second. The goal of the Genesis mission was to understand how the solar system, and so the Earth, was formed over the last 5 billion years from the initial swirling cloud of dust called the solar nebula. There are many models of the evolution of the solar system, explained Franchi, but without knowing what the solar nebula was made of you can't nail the right model down. As the particles in the solar wind reflect the makeup of the original solar nebula, scientists hoped that the sample would have the necessary information to get the models right.

The Genesis spacecraft left Earth in August 2001 for its destination, the L1 Lagrangian point. This is one of the known solutions to the three-body problem, where the forces of gravity from the Earth and the Sun are balanced (read more about Lagrangian points in Mathematical mysteries: the three body problem and Heavenly choreography). "It's a good place to park", said Franchi, part of the Open University team that was to be among the first to analyse the Genesis samples. Genesis parked in a halo-shaped orbit around L1 for over two years, unfolding the collector plates made up of 55 hexagonal wafers of ultra-pure materials, such as silicon, gold, sapphire and diamond. Because of their speed, the particles in the solar wind are embedded in the wafers, just nanometres below the surface. Franchi and the other scientists are hoping that this embedding will be enough to protect the sample now that the wafers are possibly smashed into pieces.

Despite collecting for so long, there will still be only a tiny amount of solar wind particles in the sample - just 10-20 micrograms, equivalent to a few grains of salt. For this reason, the spacecraft was constructed in a special "clean room" to prevent possible contamination of the wafers, and the wafers were to be analysed in similarly clean environments. After taking such care, a crash into the desert floor will cause problems.

"The samples are still in there," Franchi said of the crashed capsule. "They might be a bit more smashed up than we would have hoped." But he is hopeful that they may be able to retrieve the samples, and may yet get some useful information from the mission. "It may be contaminated, but the contamination will all be on the surface," he said. Hopefully, the nanometres separating the solar wind particles from the surface will allow scientists to remove the surface contamination without damaging the sample.

NASA is currently analysing the capsule to assess the extent of the damage. And scientists like Franchi are waiting to see if its broken cargo can still shed some light on our origins.