Can you describe an event — something that happened — without making reference to space and time? A more pertinent question (if you haven't read the previous articles) is why you might want to do so. Every event, whether it's my birthday party or two fundamental particles colliding, has a time and a place and taking these features away from it doesn't seem to make much sense. Unless you are a theoretical physicist.

Laura Mersini-Houghton explain a timeless and spaceless definition of an event.

Both of the great pillars of twentieth physics, quantum mechanics and the general theory of relativity, cast doubt on our intuitive notion of space and time and what it means to be located in them (see the articles What's happening and Is it happening?). The ultimate goal of twenty-first century physics is to combine these two theories (which as they stand are fatally at odds with each other) to derive a unified theory of quantum gravity. Some physicists believe that such a theory should be formulated without reference to space or time.

"One of motivations behind the effort for quantum gravity has been a space-time independent description of physics, or of reality," says Laura Mersini-Houghton, a theoretical physicist and cosmologist at the University of North Carolina at Chapel Hill, who has developed her own theory for the origin of the Universe. "So whenever we connect a new concept that we are trying to define, to space or time, then we are failing in our hope having a spacetime independent definition of this concept."

What, then, should a definition of an event refer to? One example of a more abstract object comes from quantum mechanics. The mathematical description of a quantum system is based on something called the configuration space of the system. As the name suggests a configuration space encodes all the possible configurations a physical system can be in (for example, all the possible configurations a collection of particles can have in space). In classical mechanics, such a space is usually related to space and time as we know them, but in quantum physics it can be something much more abstract.

"If quantum physics is at this stage our best theory for describing the Universe at extreme energies or distances then we would like to be able to describe an event in configuration or some abstract space rather than in spacetime," says Mersini-Houghton. "For example, when we are studying the origin of the Universe in terms of quantum cosmology, we are talking about the wave function of the Universe. That wave function is defined on a superspace that has nothing to do with spacetime."

So, with some of the motivation briefly explained, let's have a go at defining an event independently of space and time. "Something clearly has to happen to record that happening as an event," says Mersini-Houghton. "If we think of a happening in some abstract space that has nothing to do with spacetime, then we can think of a variation of the state [of an object] with respect to the parameters of that abstract space. Once we record the variations of the state with respect to whatever abstract space we're in, then that qualifies as an event." 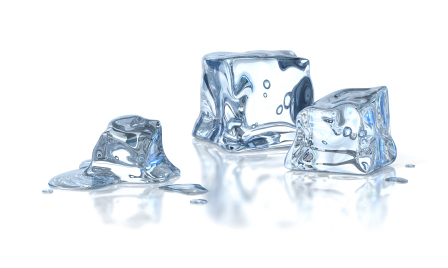 You can think of the freezing process without reference to time or space.

As an example, think of water freezing to ice. It's tempting to think of this as a process in space and time — the water is in your freezer and one minute the water it's liquid and the next it's solid — but you can think of it in terms of temperature only. Freezing is the change of state of the water from liquid to solid as the temperature crosses a particular threshold. The underlying space here is the space of all possible temperatures: as you vary the temperature parameter, you detect a change in the water's state. Something must have happened to induce that change, and there's your event.

For the mathematically-minded here's another example. Think of equations of the form

is a real number. There’s a whole family of them, one for each value of

. The family of equations forms a mathematical space, which we can think of it as completely unrelated to space and time. Something very special happens when the parameter

: the equation changes its "state" from having one solution

) to having a solution only for

). The state of the equation changes as you vary the parameter

and that can be classified as an event.

It's a very general definition of an event, but that's the beauty of it: it can be applied to all sorts of situations, from water freezing to ice to an abstract mathematical context. Mersini-Houghton suggested this definition at a conference organised by the Foundational Questions Institute that was devoted to exploring the physics of events. And while most people probably won't need it — we all know what we mean by an event in the context we're working in — it might come in useful for physicists trying to understand the very nature of reality.

Which brings us to a tantalising question. Nobody knows exactly what time is, and especially why it seems to relentlessly march in one direction only (see this article to find out more). But if we come up with a rigorous definition of what an event is without reference to space and time, could we then perhaps define time simply as a sequence of events? This would echo the 17th century mathematician Gottfried Wilhelm von Leibniz' idea that time is relational. Rather than being a thing in itself, it's about the relationship between events.

But Mersini-Houghton thinks that that's too much to ask. "Time seems to be one of those universal fundamental building blocks of nature. Every system, every state, will have many events occurring to it, but they don't appear to have a unifying theme, a common parameter that tracks changes of their states in their individual 'superspaces', while time is something that is in the very fabric of nature. It's hard to see how to use the concept of an event, even an abstract definition of it, can be used to our advantage in defining time."

Marianne Freiberger is Editor of Plus. She interviewed Mersini-Houghton at the FQXi international conference which took place in Banff, Canada, in August 2016.