Love is merely madness according to Shakespeare, but that shouldn't stop a true mathematician from imposing some reason on it. And since love is just a game and mathematics contains a perfectly good theory of games, why not start there? This is exactly what Peter D. Sozou and Robert M. Seymour from University College London did in a study that was published in the journal Proceedings of the Royal Society B this summer.

Sozou and Seymour concentrated on the initial phase of courtship, in particular the giving of gifts. Giving presents is an integral part of those early stages of love, not only for humans, but also for many animal species. Often it's the male that offers the gift: for a female, the cost of hooking up with a male can be high because it might lead to pregnancy. She has to be choosy about her partners, so often it's up to the male to do the persuading. A present can give her valuable information about the male's intentions and his "quality". But a male has to be careful, too. If he offers a cheap gift (in terms of effort or nutritional value for animals, or money for humans) the female may not take him seriously or mistrust his intentions. If he offers a valuable one, she may simply take it and run, without giving the male what he wants, which is - well - everlasting love if he's human, and to mate if he's an animal. 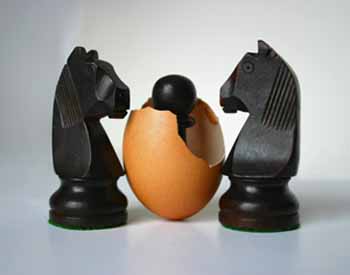 What we have here is a classical two-player game consisting of a sequence of moves: the male offers a present, cheap or expensive according to how he rates the female, the female decides whether or not to accept the gift, and whether or not to mate (let's stick to animal terms). If mating has occurred, the male may or may not desert the female, maybe leaving her with a brood to look after.

So what's the best strategy? That, of course, depends on various things, for example how attractive you are. What "attractive" means is hard to pin down, and no-one, whether human or beast, knows exactly how attractive he or she is to a prospective partner. But you can make a good guess, based on previous experience. If you've had a lot of admirers in the past, then chances are that you'll be attractive to this one, too. The mathematicians quantified this guess by assigning to each "player" a probability that the other will find him or her attractive.

With love's ingredients replaced by sober numbers, the scientists set out to find the best strategy for both male and female. They tried to find a so-called Nash equilibrium, named after the mathematician John Nash who was made famous by the movie A Beautiful Mind. Such an equilibrium consists of two strategies, one for each player, which balance each other out in such a way that neither player has anything to gain by changing his or her strategy. Whether or not a set of strategies is in equilibrium depends on the parameters involved - life, unfortunately, favours the attractive. But though there's variation, one trend emerged that is important to males, both attractive and unattractive: give a gift that's expensive to you but worthless to the female, in a material sense, and you're in with a good chance while minimising your risk.

By offering such an extravagant gift the male signals that he rates the female highly, and that he's got spending power. At the same time, the female will only accept it if she really is interested. The male has balanced the cost of the gift by reducing the risk of falling for a "gold digger". In human terms, an extravagant gift could be an expensive night out: it costs the male but is distinctly uninteresting to the female if she doesn't value his company. But also in the animal world there are examples of "worthless" male efforts. A male dance fly, for example, offers cotton balls which are of no use to the female, and a peacock's impressive display is exhausting to him, but pretty worthless for her.

So is this a sure-fire way to romantic success? Well, unfortunately reality is often more complicated than that. "Mating" in humans does not necessarily lead to pregnancy, so the gender roles can be turned upside down. Also, different people may value gifts differently: while one woman may be impressed by the offer of a Mercedes Benz, another may be positively put off by such pretentiousness. And some women may prize a "worthless" night out even in the company of an unattractive male. What's worse, animals, as well as humans, do not always play fair. Some females may chose one type of male for child care and another type for brief romantic encounters, having the best of both worlds. And some males, like those of the hanging fly, try to steal back their gifts after mating to use on another unsuspecting female.
It seems that game theory can give some valuable insight into why certain courtship behaviours have evolved. But to completely unravel the tangles of love, we may need a good dose of chaos theory.