Maths in a minute: Equal temperatures

At every given point in time there are two points on the equator of the Earth that have the same temperature.

How do we know this? Well, here’s a proof. Let’s look at the equatorial plane which slices through the Earth at the equator. The equator is a circle which lies in that plane, and we can choose a coordinate system on the plane so that the point

lies at the centre of the equator. For each point

on the equatorial circle there is a point

which lies diametrically opposite 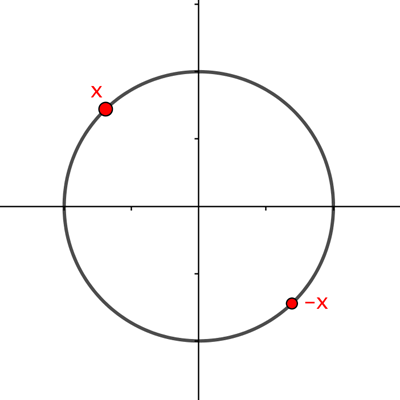 on the equator comes with a temperature

. We can assume that the function

, which allocates a temperature to each point, is continuous. That’s because temperature doesn’t suddenly jump up or down as you move around on the Earth.

It is also continuous.

If this function is equal to

, then we are done because if

so the temperature at

is the same as the temperature at

anywhere, then let’s assume (without loss of generality) that there is a point

There is a result, called the intermediate value theorem, which says that if a continuous function is greater than

at some point of its domain and less than

at another, then it must equal

at some point in between the two. Illustration of the intermediate value theorem. If t(x)>0 and t(y)<0 and t is continuous, then there is a point z between x and y such that t(z)=0.

, there must be a point

on the circle such that

So the temperature at the point

is the same as the temperature at the point

The result actually holds for any circle on the Earth, not just the equator. In fact, the result is the one-dimensional case of the Borsuk-Ulam theorem, which says that for any continuous function

from the circle to the real numbers there is a point

-sphere to the set of

-tuples of real numbers there is a point

I'm sure I am missing something, but for this continuous function there is 'a' maximum value and 'a' minimum value, (1st moment =o) this is only at a single (x) value?