News from the world of maths: Not so fantasy football

Not so fantasy football 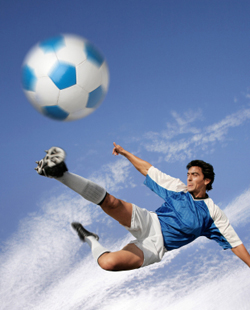 Next time you're off to the bookies to place your footie bets, you might be better off consulting a statistician than a football expert. On his Understanding Uncertainty website self-confessed football un-enthusiast David Spiegelhalter used a simple statistical model to predict the results of the last ten Premier League matches, which were played on the 24th of May 2009. In terms of predicting whether a game ended in a win, draw, or defeat for the home team, Spiegelhalter's model was right nine out of ten times, compared to the seven out of ten score achieved by the official BBC football expert Marc Lawrenson, and the model predicted two scores exactly.

Spiegelhalter and his co-authors Mike Pearson and Ian Short quantified the individual teams' attack strength and defense weakness based on their past performance, and then, with a little help from probability theory, used these ratings to work out the most likely outcome of a particular match. (You can see the details of this model on his website.) "These types of models have been refined over the years and are now used by bookies and sports betting companies, who employ experienced statisticians and make use of the latest computational methods," says Spiegelhalter. But he concedes that his very basic model might have been a bit lucky this time: "One thing you can bet on is that simple models like this one will be very unlikely to out-perform the odds being offered by bookies, so don't use them to spot good bets!"

Spiegelhalter announced his prediction on the BBC Radio 4 programme More or Less, which was aired before the final match day, so you can be sure that no hindsight fraud was involved.

David Spiegelhalter is Winton Professor for the Public Understanding of Risk at the University of Cambridge and regularly writes for Plus (see for example his article on the 2006-2007 Premier League season). His Understanding Uncertainty website is designed to inform the public about everything to do with risk and uncertainty, from health scares to predicting election results.

davids approach seems quite nice to me, so i think it takes into account all the strength and weakensses of both the teams, now leaving the thrill factor (which is still very much alive,as it is a guide only) i think if one is thinking of investing in sports picks ,the theory appears nice in principle,
cheers, richard,