Shining a light on gold

People have been using gold particles dispersed in water — gold hydrosols — for medical purposes for over 1000 years. Recently, hydrosols containing gold nanoparticles have become particularly popular because they have exciting potential in cancer therapies, pregnancy tests and blood sugar monitoring. Researchers from the Davy Faraday Research Laboratory are exploring the medical uses of gold nanoparticles and they are currently displaying their work to the public at the Royal Society Summer Science Exhibition at the Southbank Centre in London. "Nanotechnology offers scientists novel applications in the field of biomedical sciences, and we are focussing on harnessing this potential to advance health care diagnostics and therapeutics, including localised therapy for cancer treatment," says Nguyen Thi Kim Thanh, who has put together the exhibit. 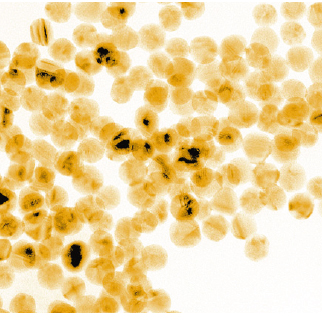 The exact properties of gold hydrosols depend crucially on the concentration of the nanoparticles in them, that is the number of particles per unit volume. But how do you determine the concentration of such tiny particles, whose diameter is on the scale of one-billionth of a metre? As it turns out, the answer lies in the way the particles interact with light and the maths of light absorption.

In practice, researchers work with gold hydrosols containing spherical particles that are all similar in size. When you shine light through the hydrosol the particles scatter the light and absorb some of it, a phenomenon known as extinction. It's measured by a number known as the extinction coefficient, which depends on the size of the particles and the wavelength of the light you're shining through the hydrosol. If you know the size of your particles, you can work out the extinction coefficient using a complex mathematical formula called Mie theory, which is derived from Maxwell's equations describing electromagnetism.

Using a device called an ultraviolet-visual spectrometer, scientists can measure how much light of a given wavelength is absorbed by a hydrosol. This absorbance, call it A, together with the distance L the light has to travel through the spectrometer, and the extinction coefficient Q (for your given wavelength and particle size) are related to the concentration C by the beautifully simple equation

As is to be expected, the equation, known as the Beer-Lambert law, tells you that increasing the concentration increases absorbance — the more particles there are, the more light will be absorbed.

The Beer-Lambert law gives you the concentration of particles if you know their exact size, but in 2007 Thanh and her co-workers went a step further by spotting a mathematical relationship between the particles' diameters and the absorbance of the hydrosol. The relationship makes it possible to work out the particles' exact size from the spectroscopy observations, as long as you have a very rough idea of how small the particles are. For example, suppose you know that your gold nanoparticles' diameter is larger than 25 nanometres. Shining light through the hydrosol, you can use a spectrometer to measure a number related to absorbance, called the surface plasmon resonance peak, written as

of your particles is given by the equation

There are similar formulae for nanoparticles smaller than 25 nanometres.

Once you have worked out the diameter of your particles in this way, you can use the Beer-Lambert law to determine their concentration in the hydrosol.

And for those nanoscientists who don't want to do any maths at all, Thanh and her team have even produced tables in which you can look up the size and the concentration of the particles given your specific observation from the spectrometer. So while the maths of light absorption is essential in exploiting the medical potential of gold nanoparticles, scientists don't even have to think about it.

This article is based on the Maths Inside project, a collaboration of Plus and the Mathematics Promotion Unit (run by the London Mathematical Society and the Institute of Mathematics and its Applications), in conjunction with the Nanoscale science exhibit and the Royal Society. The Maths Inside project reveals the maths behind four specially chosen exhibits at the Royal Society Summer Science Exhibition. Click here to find out more about the project and to read articles accompanying other exhibits.