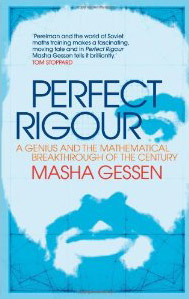 Perfect rigour: A genius and the mathematical breakthrough of the century

In 2006 the Fields Medal — one of the highest honours in mathematics — was awarded to Grigory Perelman for solving the Poincaré conjecture, a famously difficult problem that had stumped mathematicians for a century. To the surprise of many, and the excitement of the media, Perelman declined the award and withdrew not only from mathematics but from the world generally — cutting all ties with colleagues, friends, and mentors. In Perfect rigour Masha Gessen sheds some light on this brilliant and perplexing character and the reasons why he would renounce both the worldly rewards of his mathematical achievement and also his beloved vocation, mathematics itself.

Perfect rigour is not your typical modern scientific biography. The reclusive Perelman has not spoken to journalists, let alone potential biographers, for years. Confronted with no direct contact with her subject, Gessen has had to reconstruct his life from interviews with old friends and teachers, and also by studying the various environments in which he lived. Rather than being a weakness, however, if anything this obstacle makes the story more interesting. Gessen is forced to cast her net more widely, and in doing so describes an array of fascinating worlds and little-known social histories. For example, the "mathematical counterculture" in Soviet Russia, the hothousing of brilliant Russian boys, and of course the world of modern international mathematics: polite and well mannered on the surface, but also territorial, political, and careerist. Gessen's accounts of these worlds are interesting in their own right, and not only for the light they shine on Perelman's social and mathematical development. Especially compelling is her description of the seditious "indie culture" of those researchers who had opted out of the mainstream Soviet system (by refusing to join the Party, for instance), as well as the struggle of famous individuals caught in that system, such as Kolmogorov, the great theorist of turbulence.

On the other hand, I was a little disappointed with the brief treatment of the Poincaré conjecture itself, the grand problem that Perelman goes on to solve. It is allocated only a short chapter, and it is never quite stressed why it is such an important question. Then again, given the difficulty in just posing the problem in normal language (let alone the specialised mathematics required to solve it), perhaps this is all that could be expected. Those readers who want to delve a bit deeper here might want to turn to O'Shea's The Poincaré conjecture: In search for the shape of the Universe (which has been reviewed in Plus).

That said, Gessen does a good job of impressing on us the drama and excitement of mathematical discovery. And the last chapters, which focus on Perelman's solution to the problem, its dissemination, and then the train wreck that ensues, rattle along at a good pace. After publishing his solution, Perelman visits the States to explain his mathematics, but he quickly stops playing along. He turns down lectureships from the best American universities, repelled by the blandishments of the university officials. He refuses to publish the solution formally — if the proof is solid, why bother? He is also stung by the caution with which his complicated solution is received by leaders in the field (it in fact takes a number of years before experts declare that Perelman's proof is sound). Eventually Perelman returns to Russia quite disgusted with the circus he feels he has had to endure. The story culminates in a bizarre priority dispute over the solution with a group of Chinese mathematicians, but by then the painfully sensitive Perelman had already divorced himself from mathematics — the final straw for him being the persistence of sloppy footnoting practices in his home institution in St Petersburg.

So do we better understand Perelman and his motivations by the end of the book? I think so. Gessen effectively describes the purity and consistency that Perelman lives by and expects. She also reveals how his strict principles could not coexist practically with most human relations and social institutions. An amateur diagnosis of Asperger's or autism is offered, but this seems somewhat irrelevant. Should something so human as the desire for purity and consistency in social life be medicalised (even if Perelman's case is extreme)? We may not agree or sympathise with Perelman, yet his story and his struggle couldn't help but lead me to ponder the lapses of integrity that we accept in our own and our colleagues' dealings. How much of it is necessary? And how much of it are we willing to take before, like Perelman, we also say enough is enough?

Henrik Latter is a postdoc at the University of Cambridge, where he works on the dynamics of Saturn's rings, protoplanetary disks, and anything else that's astrophysical, fun, and nice to look at.