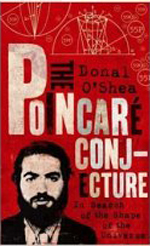 The Poincaré Conjecture: In search of the shape of the universe

The Poincaré conjecture is one of the few mathematical results that has managed to catch the interest of the mainstream media. Acknowledged as one of the most important open questions in mathematics, and endowed by the Clay Mathematics Institute with a reward of $1,000,000 for the first correct solution, it had bugged mathematicians for over a century. Then, in 2003, the reclusive Russian mathematician Grigory Perelman posted a series of online papers claiming to have solved the problem. He embarked on a tour of the USA, explaining the main ideas contained in his papers — they seemed sound but lacked some detail.

To the frustration of the mathematical world, but much to the delight of the media, Perelman soon disappeared from the mathematical radar and even declined the most prestigious prize of mathematics: the Fields Medal [see Plus article The Fields Medals 2006]. Mathematicians around the world were left trying to expand his ideas to reach a rigorous proof. The rest of the world, meanwhile, was left wondering what the conjecture actually means and why it is so important. This book provides a long-overdue popular account of the problem.

So what does the conjecture say? It belongs to the field of topology, a branch of mathematics which deals with shapes. It is sometimes described as "rubber sheet geometry", since there is no notion of distance. For example, a coffee mug (with a handle) and a doughnut are deemed to be the same because we can deform one into the other, without any tearing.

To understand the conjecture, think of two-dimensional spaces, like the surface of a football or of a doughnut. Imagine placing a piece of string around a football in a closed loop; you can pull it back slowly and shrink the loop down to a point without tearing the ball or the string and without it leaving the surface. On the other hand, if you lay the same string on the surface of a doughnut, through the hole, then there is no way of pulling the string so that it shrinks to a point without breaking either the string or the doughnut. We know then that the doughnut is not equivalent to the sphere.

Posed in 1904 by Henri Poincaré, the leading mathematician of his day and father of topology, the problem has inspired generations of mathematicians to try and find a proof (or a counterexample). For decades none of them succeeded, but the ideas they developed along the way represent some of the most important advances in topology.

Donal O'Shea's book begins with an account of an earlier scientific breakthrough: our realisation that the surface of the Earth is a two-dimensional sphere. Short of leaving the Earth and looking at it from space, how is it possible to come to this conclusion? Questions like these motivate the concepts surrounding the Poincaré conjecture and set the scene for what is to come. In subsequent chapters, O'Shea explains in easy language, and using everyday analogies, the concepts of Euclidean, hyperbolic and spherical geometry, and devotes a whole chapter to Poincaré’s 1895-1904 papers, in which important properties of three-dimensional spaces were established and his famous conjecture was formulated.

O'Shea's approach is more narrative than technical, conveying the ideas of topology with clarity and in a way that is accessible for the general public. The reader interested in learning more can consult the extensive notes at the end of the book, which further explain the formal concepts and refer to more technical sources. Being a first edition, there are naturally a few typographical errors, but the most serious issue is the low quality of the figures. They are pixelated at best and fuzzy and illegible at worst. There are enough to convey the idea, but in a book about geometry and topology an extra effort should have been made.

Throughout the book, the human side of mathematics is conveyed through stories of disappointment and jealousy: the almost simultaneous discovery of non-Euclidean geometries by Gauss, Bolyai and Lobachevsky, and the exchange of letters between Poincaré and Klein about priority claims. The narrative is punctuated with historical facts about the political situation of the time and place of the mathematical discoveries, like for example the Prussian-French war that provided the background for the animosity between Klein and Poincaré.

Once the stage has been set, O'Shea briefly recounts the stories of some of the leading 20th-century topologists and their attempts at solving the Poincaré conjecture and its generalisations to higher dimensions. A breakthrough in the development came in the seventies when William Thurston related geometry (where there is a notion of distance) and topology. He argued that though spaces could have many shapes, they nonetheless had a "preferred" geometry. He conjectured that every three-dimensional space could be cut down into one or more of eight types of spaces, each with a certain homogeneous geometry. This became known as the geometrisation conjecture and implies the Poincaré conjecture.

In 1982 Richard Hamilton of Columbia University devised a programme for proving Thurston's conjecture. Hamilton's idea was to start with any geometry on the three-dimensional space and let it evolve using something called the Ricci flow: a partial differential equation analogous to the heat equation. Eventually, the process comes to rest at the especially nice geometry that Thurston proposed must exist.

In non-technical language the book recounts the difficulties encountered in Hamilton’s programme — places of infinite density known as singularities, could appear, pinch off and even shrink away. Since the mid-nineties, progress trying to control these singularities was stalled. Although the programme still held some hopes, people started to doubt whether it would actually work.

This is Perelman's great contribution. He shows that the singularities can be dealt with, since the pieces of the space where they occur can be cut out from the original space. Then the Ricci flow can be restarted in the remainder of the original space, pushing Hamilton's programme to completion.

Several groups of mathematicians have now presented papers filling in the details of Perelman's proof of the Poincaré conjecture, which is now widely accepted as complete and correct.

The book concludes by describing the 2006 International Congress of Mathematicians, where Perelman was awarded a Fields medal. The highest distinction in Mathematics, was nonetheless declined for the first time in its history. The one million dollar prize offered by the Clay Institute for the solution of the Poincaré conjecture has yet to be allocated.

Karla Diaz Ordaz obtained her PhD in Mathematics at Imperial College London in 2006. After a year as a post-doc, trying to uncover the deepest secrets of mathematics on the beaches of Rio de Janeiro, she now does research on ergodic theory at the University of Warwick.