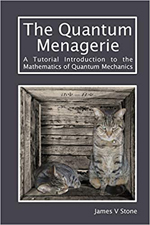 Quantum mechanics is weird, and it is hard. One reason it's hard is that the physical phenomena which gave rise to it represent a fundamental contradiction of our everyday experience of the world. The second reason is that there are three equivalent theories of quantum mechanics, developed almost simultaneously in the 1920s, each theory with its own mathematical notation.

But don't despair. The book The Quantum Menagerie by James V Stone (published December 2020) explains quantum mechanics using a finely balanced combination of words, diagrams and mathematics. The result is a tour of the most intriguing aspects of the theory, including Einstein's "spooky action at a distance", Bell's inequality, Schrödinger's cat, Heisenberg's uncertainty principle, and de Broglie's matter waves.

To get a taster of the book, read Stone's Plus article Using quantum mechanics to edit the past. If you like to marvel at quantum strangeness then this article won't disappoint.