This year's Frieze Art Fair in London is going to tempt its arty audience with a little string theory. A project developed by David Berman, a physicist at Queen Mary, University of London, and the US artist Jordan Wolfson will invite visitors to view the show together with a string theorist, who will talk about his trade while touring the exhibition. The aim is to open up unconventional perspectives on the art works on display.

"The idea is to give people a background in string theory which allows them to make their own inferences," says Berman. "For example, one of the key goals of string theory is unification: to bring all disparate strands of physics together in one unifying theory. We'll explain this idea to people before the tour, so when they go on to look at a room full of art, they may start to realise that the things they thought were all different have similarities, and that there's an underlying unity behind them." 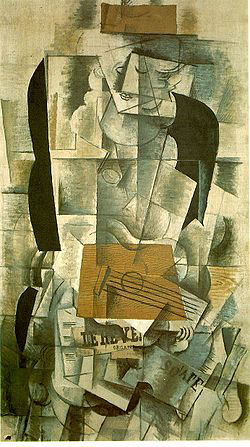 Historical precedent: Georges Braque's 1913 painting Woman with a guitar. The cubists flirted with higher dimensions and presented 3D objects on a 2D canvas from a multitude of viewpoints.

Many other concepts arising in string theory have meaning beyond the world of physics, and some have already been extensively explored by artists. Multiple dimensions — the idea that the world is made up of more than the three dimensions we see — are an example, which Berman and Wolfson have already tried out on people in practice runs of their tour. "People don't necessarily fully understand the details of this concept," says Berman, "but they understand that there are some way-out ideas to do with space and weird geometries and topologies. These fit in with aesthetic criteria as well: there are ideas out there that are somehow appealing geometrically and topologically, and that geometric and topological appeal can then supplement or complement art works."

The project's aim isn't to educate the public on string theory, or to lecture them on art, but to provide new vantage points for people who mainly live on an arty diet. "We're not after an art-criticism-style 'this-is-like-this-and-this-is-like-that' approach," says Berman. "What we're trying to do is provide people with a way of seeing the world which is almost the antithesis of how art normally works."

If you've got a ticket to the Frieze Art Fair, taking place between the 15th and 18th of October, then you can sign up to a string theory tour, led by one of eight string theorists involved, on the day you attend. For those who daren't go so close to a string theorist just yet, there's another way of engaging with the project. The public's response will be recorded and re-enacted in front of Frieze visitors the following day, turning the project itself into a performance.