Time to get packing?

Two Russian mathematicians have shown that the Large Hadron Collider (LHC), soon to start up at CERN, could create the first ever time machine. It's by no means a certainty, but, according to Irina Aref'eva and Igor Volovich from the Steklov Mathematics Institute, it's a distinct mathematical possibility.

That travelling through time into the future is possible has long been an accepted fact: not only are we all en route to the future at any given moment, but Einstein's theory of special relativity states that time goes slower if you are moving at very high speed. If you take a trip on a fast space ship, then when you come back to Earth, time there will have passed faster than it did for you, and you effectively jump into the future (this phenomenon is known as time dilation and explained in more detail in the Plus article What's so special about special relativity?).

Time travel into the past, however, is a more contentious beast, not least because it throws up a confounding paradox: if you travelled back to your mother's childhood and killed her, then you shouldn't exist. It's perhaps surprising, then, that nothing in the equations of physics forbids travel into the past. Einstein's general theory of relativity states that space can be curved by massive objects, and that time and space are inextricably linked to each other. It's conceivable, then, that time could be curved, too. In the 1940s the mathematician Kurt Gödel did indeed show that nothing in Einstein's theory prevents a line in time from curving back on itself and reconnecting to a point in the past. 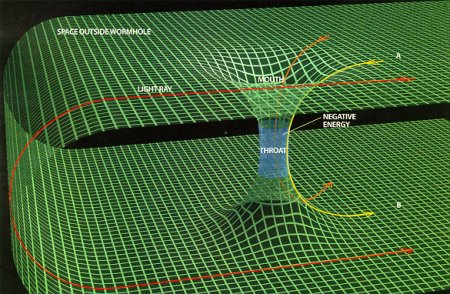 A wormhole. Image reproduced under the GNU free documentation licence.

In the 1980s, physicists showed that such closed time loops can occur if spacetime admits wormholes: tunnels that act as shortcuts between one point in spacetime and another, effectively allowing you to beat the speed of light. Time dilation can turn wormholes into time machines. Imagine two people, Alice and Bob, each holding on to the end of a 10m long wormhole. Bob gets into his end and accelerates sufficiently to cause time dilation. When Bob returns, time will have passed slower for him than for the stationary Alice — for Bob it will be 3pm, say, while for the stationary Alice it will already be 4pm. But relativity asserts that time remains the same anywhere within the wormhole, so looking back through the wormhole, Bob will see a past Alice at the other end for whom it is only 3pm. Even better, the 4pm Alice can jump into the wormhole and traverse the 10m to visit herself in the past.

Wormholes are perfectly compatible with Einstein's equations, but no one has ever detected one. This is where the LHC comes in: the particle collisions within it could tear holes into spacetime. Aref'eva and Volovich already knew that these could take the shape of tiny black holes, but trailing through Einstein's equations again, they found that, mathematically at least, wormholes are also a possibility. Indeed, they are just as likely to form as black holes. Scientists can't create these spacetime holes at will, because they lack a unifying theory that can simultaneously cope with high energies and tiny distances, but they can sit and watch to see if the LHC does the job for them.

Unfortunately though, the mere existence of wormholes is no guarantee that we'll get travelling any time soon. Not every wormhole is a time machine, since there may not be the necessary time shift between its ends. Even if there were, you'd have to be of subatomic size to fit into a wormhole created by the LHC and chances are that its entrance would collapse immediately.

But still — the detection of wormholes at CERN would at least keep the dream alive. As for the paradox, there are ways around it. If your trip into the past took you to a parallel universe in which you didn't exist, then you could happily murder your mother without eliminating yourself. And parallel universes, just like time machines, are a distinct mathematical possibility.