What can science see?

CERN's Large Hadron Collider (LHC) is the world’s largest, and most famous, laboratory experiment. It's a 27 kilometre circular tunnel that sits 100m below ground on the Franco-Swiss border. Since it was switched on in 2008 the LHC has accelerated tiny particles of matter to close to the speed of light, smashing them together in over a million billion collisions.

"At the Large Hadron Collider at CERN, we built what's essentially an enormous microscope," says Ben Allanach, professor of theoretical physics at the University of Cambridge. "The bigger you build the thing, the smaller [scales] you can see." It might not look like a microscope, but that is because it is using a different way to see the very small.

At the LHC they are not using light to detect particles. Instead this giant microscope fires protons around a circular tunnel at very high energies and then captures the collisions using machines that act like 3D cameras. It's in these collisions that new particles emerge. "Then you take all the data, the electronic impulses [from the cameras], and you try to do some detective work to work out what was happening." (You can find out more in Allanach's article Particle hunting at the LHC.) 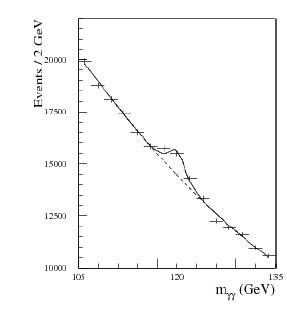 A histogram showing a simulation of the number of collisions at the LHC that would produce pairs of photons with a particular energy, for a Higgs boson of mass 120 GeV. The dotted line is the predicted counts of collisions that do not involve the Higgs (as predicted by the Standard Model). A significant bump in the data deviating from this shape can be explained by collisions that produced a Higgs boson, which subsequently decayed to photons. Image: Ben Allanach.

The LHC hit the headlines in 2012 with its discovery of the Higgs boson. Until then, the Higgs had been a missing link in the standard model of particle physics, a mathematical description of the fundamental particles and their interactions. But finding the Higgs wasn't a matter of directly catching the beast itself.

There are ordinary processes which result in collisions that do not produce a Higgs boson, which also give two photons. The probability of these other collisions occurring varies smoothly with the energy of the photons produced: the high-energy photons aren't produced often, but the low-energy ones are produced a lot. "It's a smooth distribution," says Allanach.

When the beams of protons collide in the LHC, detectors measure the energy, momentum and direction of the particles produced. The results are plotted in histograms counting how many collisions produced certain footprints, say pairs of photons with given energies as that shown in the histograms below. "But the Higgs bosons all come out with one particular energy, so what you're looking for is a smooth distribution with a big spike in it. That spike is your Higgs boson." (See the Plus article Countdown to the Higgs for more detail.)

The collisions inside the LHC are quantum processes, so inherently, by the laws of quantum physics, they are random processes. "You can't say on a particular collision what the energy [of the two photons] is going to be, or even if it's going to give you two photons, but you can say: if we've got the theory right we know what the relative probabilities of the different possibilities are," says Allanach. "We made some predictions with the mathematics of the theory, as to how the collisions should look like if the Higgs boson was there, and how they should look if it's not there."

This shows the data for the Higgs boson as it came in from the LHC collisions. At first it looks quite noise, but begins to smooth out as more data comes in, leaving one peak remaining. (Video courtesy of Ben Allanach)

When data first starts coming in from the LHC it looks quite noisy, but the more data you collect the more the histogram starts to even out. When peaks appear in the data physicist need to ask how likely it is that that the peak is due to something — like the Higgs boson being produced — rather than just a random fluctuation from the fuzziness of quantum physics.

"There are two thresholds we use in particle physics," says Allanach. "One of them is evidence for an effect: which means it's interesting but we're not sure. That happens if the probability of this peak is one in about a thousand." Such a probability means that if we were to run a thousand Large Hadron Collider experiments with the same conditions, creating a thousand full runs of data, then only one of them would register a peak that big just by chance, without there actually being a Higgs boson. That sounds pretty good evidence but this isn't good enough for particle physics.

"The gold standard for observation — for discovery — is about one in 10 million. There's a peak [in the histogram such] that only one in ten million [repeated LHC experiments] would you get such a big peak by chance." Then, and only then, are particle physicists happy to say that what they've seen is not due to chance, and they have observed, for the first time, a new particle.

Read more about...
The physics of observers
higgs boson
LHC
Tweets by plusmathsorg