Where's the maths in beer?

This article is based on one of Budd's Gresham College lectures. Watch the full lecture here, and see here to find out more about this free, public lecture series.

There's actually quite a lot of maths in beer. To convince you of this, here are three beer-related maths stories.

Let's start with the head. One of the key features of a pint of Guinness is the wonderful creamy foam head. This is in contrast to the much smaller head that we find on a pint of bitter beer. For the manufacturers of beer to get both types of head involves a lot of science and maths. The foam in the head of a pint of bitter is made of networks of bubbles of carbon dioxide separated by thin films of the beer itself, with surface tension giving the strength to the thin walls surrounding each bubble. The walls of these bubbles move as a result of surface tension, with smaller bubbles moving faster as they have a higher curvature. This results in the smaller bubbles being "eaten" by the larger ones in a process called Oswald ripening. Basically small bubbles shrink and large bubbles grow, leading to a coarse foam made up of large bubbles only. Eventually the liquid drains from the large bubbles and they pop, and the foam disappears.

The remarkable mathematician John von Neumann, who was (amongst many other achievements) responsible for the development of the modern electronic computer, devised an equation in 1952 which explained the patterns that we see in such cellular structures in two dimensions. In 2007 this was extended to three dimensions by a group of mathematicians in Princeton interested in the applications of maths to beer. It's a hard life! 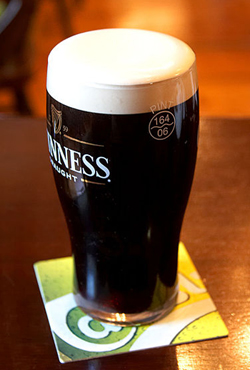 The nitrogen needs to be introduced into the Guinness when it is poured. In a pub this is achieved by having a separate pipe, linked to a nitrogen supply, which supplies the nitrogen at the same time as the beer is served from the barrel.

For many years Guinness in cans did not have a head. However, this problem was solved by the introduction of a widget, which is a nitrogen container in the can, and which releases precisely the right amount of nitrogen when the can is opened. This process must be very carefully controlled, and a lot of careful design work is required to make the widget work well. The whole process was analysed by (it appears!) the whole of the applied mathematics department at Limerick, and described in the charmingly titled paper The initiation of Guinness. Notably the same group has now done a complete analysis of the mathematics of making coffee.

Why statisticians couldn't organise a piss up in a brewery

In the year 2005 the British Science Festival came to Dublin. At that time I had the honour of being the president of the maths section of the British Science Association, which was organising the festival, and had the responsibility of devising a mathematics programme for the event. 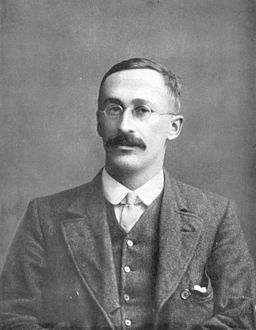 One of our plans was to have a mathematics visit to the Guinness Breweries in Dublin. Obviously there are many reasons why we might want to visit a brewery, but why should mathematicians want to go there, and why should they want to go to Guinness? The answer to both of these questions lies in the person of William Gosset (pictured) who was the chief statistician at Guinness in the first part of the 20th Century.

Guinness was in many ways ahead of its time in the production and quality control that it applied to its product (as well as the way that it was advertised). Gosset was employed in part to ensure that the Guinness stout was of a consistent quality. This was done by making careful measurements of a sample of the product and using these to assess both its general quality and its variability. This was, at the time, a difficult problem in statistics. To solve it Gosset devised a new statistical test to compare the measurements. This worked extremely well and made a very real difference to improving the quality of Guinness stout. Gosset felt it important to publish this test, but was reluctant to disclose his identity and that of his employer. Instead it was published in the journal Biometrika, in 1908, under the anonymous name of "Student". Ever since this test has been known as Student's t-test. It plays a central role in testing and maintaining the quality of food and drink all over the world.

So, let's get back to the British Science Festival. Having decided to go to Guinness we set up a sub-committee to organise the trip to it during the science festival, in part to celebrate the invention there of the t-test and its contribution to modern statistics. Clearly such a trip should include a reception and a drink of a pint of Guinness. Unfortunately, through no one's fault, it wasn't possible in the end to do this. It was only after the event that we realised we could be accused of being unable to organise a piss up in a brewery.

Three mathematicians walk into a pub...

I will finish this article with a bad story/joke about mathematicians and drinking. You have to concentrate a bit to get the joke.

Three mathematicians go into a pub and the bar tender asks, "Does anyone want a lager"?

So the bar tender ask, "Does everyone want a bitter then?"

So they all have a bitter.

My favourite beer / maths joke is the following:

And the moral of this story: is that all mathematicians should know their limits!

If you put beer in a square mug does it become root beer?

" the foam on bitter is made

No - bitter is made up of CO2 bubbles (as appears to be acknowledged later in the paragraph) except for "smoothflow"-type keg bitter which uses the same 30/70 gas (30% CO2, 70% nitrogen) as Guinness. There's no separate nitrogen cylinder, it comes premixed as 30/70 - using pure nitrogen would make it come out as solid as whipped cream.