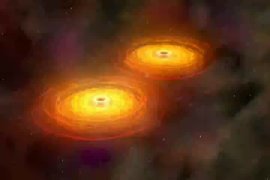 What two black holes, (surrounded by glowing accretion disks), about to merge may look like [Image from NASA]

A long time ago in a galaxy far, far away, two black holes circled each other, waiting for the moment when they would collide to form a massive black hole and release a huge burst of radiation and gravity waves into the universe. This is not the plot for the next Star Wars prequel, but the latest discovery by scientists who have, for the first time, found two black holes in the same galaxy.

The galaxy in question, known as NGC 6240, is about 400 million light years away, and was already known to contain two bright nuclei and to produce X-rays. This latest discovery was made by astronomers from the Max Planck Institute for Extraterrestrial Physics in Germany, using NASA's Chandra X-ray Observatory. Compared to previous X-ray telescopes, Chandra has eight times greater resolution and is 20 to 50 times more sensitive - the accuracy of its measurements has been compared to reading the letters on a stop sign from 12 miles away.

"The breakthrough came with Chandra's ability to clearly distinguish two nuclei, and measure the details of X-radiation from each nucleus," Guenther Hasinger, one of the researchers, said. "These cosmic fingerprints revealed features characteristic of supermassive black holes."

The motion of binary black holes must satisfy similar equations to the motion of binary stars. These equations are derived from Newton's inverse square law of gravity, and show that the black holes will nnorbit in a circular path around their common centre of mass. Interestingly, although the equations for two bodies like this can be solved analytically, those describing three bodies cannot - a problem known as the three body problem (for further discussion of the three body problem see the past Plus articles from Issue 6 and Issue 15). 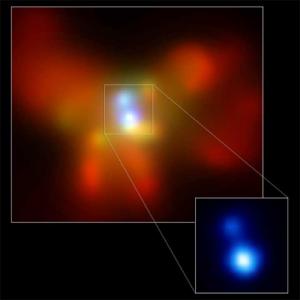 This important discovery - the first detection of a binary black hole - was a surprise to the researchers. "With Chandra, we hoped to determine which one, if either, of the nuclei [of the galaxy] was an active supermassive black hole," Stefanie Komossa, another of the researchers, said. "Much to our surprise, we found that both were active black holes!"

What is most exciting about the discovery is that astronomers predict that the two black holes, approximately 3,000 light years apart, are drifting towards each other. Finally, in a few hundred million years, they will collide to form an enormous supermassive black hole. This event will produce a huge burst of gravitational waves that could be detected by space-based detectors similar to LISA (Laser Interferometer Space Antenna - for more on LISA and colliding black holes see Catching waves with Kip Thorne from Issue 18). Despite several recent encouraging results, such as those from the EXPLORER and NAUTILUS gravity wave bars in Europe, scientists have yet to detect gravitational waves conclusively. Astronomers are hoping that discoveries such as the binary black hole in NGC 6240, will herald future cosmic symphonies of colliding black holes and gravitational waves.

Meanwhile, in another astronomical first, researchers have taken a peek inside the mysterious interior of a neutron star. Jean Cottam and colleagues from NASA's Goddard Space Flight Centre have used the XMM-Newton X-ray satellite to make measurements of a distant neutron star, part of the binary star system EXO 0748-676, which can reveal the nature of its interior.

For the first time they have measured the ratio between the mass and radius of a neutron star, and hence found its density. The nature of the neutron star's interior is described by its equation of state, incorporating the pressure, volume and temperature of the matter inside. Scientists believe that this matter is a neutron superfluid, resulting from the star's mass of about 1.4 Suns being squeezed into the space of a small city, eliminating all the space from the atoms inside. More familiar equations of state include the Ideal Gas Law PV=nRT, and Boyle's Law from high school physics. And just as these describe the nature and behaviour of an ideal gas, the equation of state for a neutron star will give information on the exotic matter and forces within it. 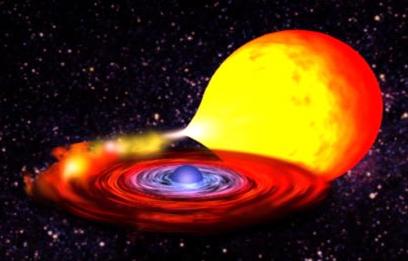 The strong gravity of the dense neutron star (the blue sphere) attracts gas from its companion star (the yellow sphere). [Image from NASA]

"Unlike the Sun, with an interior well understood, neutron stars have been like a black box," researcher Frits Paerels said. "We have bored our first small hole into a neutron star. Now theorists will have a go at the little sample we have offered them."

The measurement became possible when thermonuclear bursts occured as gas from the companion star was drawn by the neutron star's strong gravity and crashed at close to the speed of light onto its surface. The light from these explosions was warped by the extreme gravity, an effect predicted by Einstein called gravitational redshift. 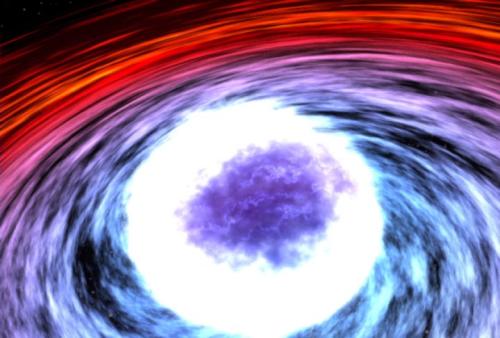 The thermonuclear burst engulfs the neutron star [Image from NASA]

"We have now established a means to probe the bizarre interior of a 10-mile-wide chunk of neutrons thousands of light-years away - based on gravitational redshift," researcher Mariano Mendez said. They hope to use this technique to measure the mass-to-radius ratio of other neutron stars, and perhaps discover even more exotic objects such as quark stars using their newly enhanced X-ray vision.