Artur Avila has been awarded the Fields Medal, the most prestigious prize in maths, at this year's International Congress of Mathematicians in Seoul.

You can listen to our interview with Avila in our podcast.

Avila is a native of Brazil who started working on advanced maths aged only 19. It's lucky he spends part of his working time in Rio (with the other part in France) as he loves doing his maths walking on the beach and listening to the waves. He is being honoured for "Formidable technical power, the ingenuity and tenacity of a master problem-solver, and an unerring sense for deep and significant questions." This is what Artur Avila is being honoured for. He has been awarded the Fields Medal for outstanding contributions to various areas of maths, but in particular to the theory of dynamical systems. 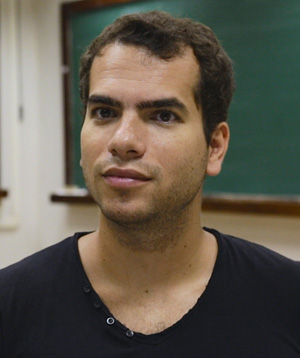 Avila is a native of Brazil who started working on advanced maths aged only 19. He spends part of his time in Brazil and part in France, and combines the strong mathematical cultures and traditions of both countries. Nearly all his work has been done through collaborations with some 30 mathematicians around the world.

As the name suggests, a dynamical system is something that changes over time: the weather, a population of animals, or the prices of stocks and shares. To understand such systems and predict their future it’s useful to model them using mathematics. For example, observing how the proportion of predator animals on an island changes over time, you may have decided to describe it using the following rule: if the proportion is

this month, then it will be

Starting with an initial proportion, say

you can now predict next month’s proportion

The question of whether the population of predators will explode, die out, or simply grow and shrink in a regular fashion now turns into a problem of pure mathematics: what are the dynamics of a function like

In the 1960s and 1970s mathematicians noticed that chaos can arise even out of very simple systems like this one. For some initial values of

the resulting sequence of points

, etc, (called the trajectory of

) eventually settles down into a stable pattern. For example, continuing the trajectory of the initial value

The trajectory gets closer and closer to the value

That behaviour is pretty regular, but there are also initial values that will result in a sequences of numbers that are wild an upredictable: they are chaotic.

The drive to understand such phenomena gave birth to the subject of discrete dynamical systems, to which scores of mathematicians contributed in the ensuing decades. Among the central aims was to develop ways to predict the long-time behavior of a system. For a trajectory that settles into a stable pattern, predicting this is straight-forward. But not for a chaotic trajectory: to predict the sequence arising from an initial point exactly you have no choice but to calculate each individual step, and even the slightest error can eventually snowball to render your prediction useless.

But all hope is not lost. When you repeatedly toss a coin the resulting sequence is entirely unpredictable – you have no way of telling whether the 100th toss will result in heads or tails. However, the maths of probability theory allows you to make more general, statistical predictions. For example, in a really long sequence of tosses you can expect the proportion of heads and tails to be roughly 50:50. In a similar way, one can hope to make statistcial predictions about typical trajectories resulting from a function like the one above, even if it's chaotic. Beautiful images like this one arise from the dynamics of functions like the one above. See here to find out more. Image Wolfgang Beyer.

While examining this possibility mathematicians noticed that many of the functions that they studied fell into one of two categories: regular, meaning that typical trajectories eventually become stable, or stochastic, meaning that the trajectories exhibit chaotic behavior but can be modelled probabilistically, so that you can still understand aspects of the system. This dichotomy of regular versus stochastic was proved to hold for many special families of functions, and the hope was that eventually a complete understanding would emerge.

This hope was realised in by Avila, Welington de Melo, and Mikhail Lyubich, who brought to a close this long line of research. Avila and his co-authors considered a very general class of dynamical systems, called unimodal maps (the function above is one of them). They proved that, if one chooses such a map at random, the map will be either regular or stochastic. Their work provides a unified, comprehensive picture of the behavior of these systems.

This work belongs entirely to the field of pure mathematics. Avila and his co-authors were not directly interested in modelling real-life systems, such as animal populations or the stockmarket. Rather, their aim is to understand the mathematical structures that are left when you strip those messy real-life systems down to their bare bones. Such foundational understanding is essential for real-life applications that are sometimes far removed from the original motivation.

Avila is being honoured for many other contributions to maths. And he is glad to be the first Brazilian to receive a Fields Medal, hoping it will provide lots of motivation for all the young mathematicians in his country.

You can find out more about chaos arising in functions like the one we explored above see Extracting beauty from chaos and Did chaos cause mayhem in Jurassic Park?.
Read more about...
chaos
dynamical system
fields medal
Fields Medal 2014
ICM 2014
News

Chaos is not just a mathematical curiosity: It holds the most fundamental secrets of the universe.
I believe that there is a deeply link between f(Z) = Z^2 + C from the mandelbrot set and the behavior of f(Z) = 2Z^2, the atom´s shells sequence that made possible all chemical bonds. They are similar, it´s that possible? There is a connection between sequences and complex numbers?