André Léger is currently finishing an industrial PhD, part-funded by Unilever, on the fluid dynamics of the human intestine at the University of Bath. He tells Plus about the joys of working in an interdisciplinary field. 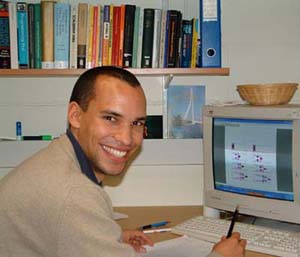 Functional foods, also known as neutraceuticals, are currently big news. Consumer goods giant Unilever is in on the act, researching ways of delivering healthy active ingredients via food. As part of this activity, it co-sponsors PhD students with the Engineering and Physical Sciences Research Council (EPSRC) in the UK - and André is one of these students.

"Unilever has a visiting Professor, Stephen Moore, in the chemical engineering department at the University of Bath," explains André. "He brought a problem to Pawel Plucinski, another member of staff in the chemical engineering department, and he quickly realised it needed some mathematical input. So they turned to Chris Budd, and Alastair Spence, professors in the maths department who are very active in industrial mathematics, and the upshot was that the company arranged to fund a PhD studentship through EPSRC to look at the problem." The PhD is jointly supervised between Unilever, and the departments of Chemical Engineering and Mathematics at Bath, so, unlike most PhD students, André has three supervisors: Chris Budd and Alastair Spence in maths, and Pawel Plucinski in chemical engineering.

André's first degree, an MMath (Master of Mathematics), was also at Bath, except for the third year, which he spent at Penn State University in the US. "That was one of my best years so far!" he says. "Everything was brand new. When I started off at Bath there were just over 5,000 people; at Penn State there are 60,000, most living on campus - the town is based around the campus. It was daunting at first, but in the end it was quite hard to leave at the end of the year - I had made a lot of friends and had so much fun."

Fun in terms of the friends, but also in terms of the work."The work was something else! Americans have a different approach to work, and set considerably more homework. I would spent Friday nights in the library researching for weekly homeworks that counted towards my grades, and I had up to 12 midterm exams per semester. The first two months I was up till 2 in the morning, just doing all the homework. I had to do five final year maths courses, and in general maths students over there only have to do two maths courses. I was working with students a couple of years older than me, and also with post-graduates. It definitely improved my maths, though. On the MMath course the third and fourth year count for 50% each, so up till then none of my courses had counted. But now I knew that whatever grade I got was going to count towards my degree, so I worked and worked, and in the end I developed, I became much better at maths." 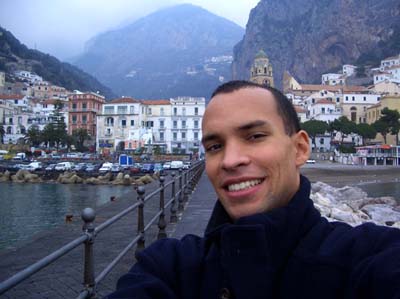 By the time André returned to Bath for his fourth year, he knew that he liked applied maths better than pure - "because pure maths can drive you crazy!" So he chose courses in mathematical biology, optimisation and numerical analysis. "We were learning how to model the population dynamics of bugs, or people; how different factors affect population density; what are the steady states and where does the population tend to, and looking at the partial differential equations that govern the biology. I found I was able to understand the maths of partial differential equations (pde's) because in the States I had done a lot in this area, and math biology has a lot of pde's, as does numerical analysis. What really appealed to me was that there's an element of reality to it."

But when André finished his first degree, continuing to study was just one of his options. His mother is German and he learnt the language from her; his father is from the French Caribbean Islands, and although he didn't learn his father's patois, his multilingual family background probably sparked his interest in languages. "I was thinking of going abroad to develop my languages after I finished my degree. As well as French, which I learnt in school, and German, which I learnt from my mum, at the beginning of my fourth year I started to learn Chinese Mandarin. My best friend is from Taiwan and I always wanted to know what his mum was saying, although it didn't turn out to be anything terribly exciting: 'Get down here now' and things like that basically! I was thinking of going to Germany to get my German fluent, I was also thinking of going to China for a while. I just wanted to see what the rest of the world was like, maybe learn a bit of Japanese, maybe Italian.

"But then I saw the opportunity to do a PhD and I took it. An email was sent around the department when the studentship was advertised, and I enquired about it, discussed the project with the supervisors, to find out whether it was the sort of maths that I liked. I've now been working on it for just over two years. There's lots of stuff left to do, but I have been writing up as I go along, so I'll be able to spend the remaining 8 months working entirely on new stuff."

André explains that many food companies are currently interested in how food is absorbed in the intestine, as they are trying to create new "functional foods" which bring added health benefits, like the cholesterol-lowering margarine Benecol. In developing these products, it is necessary to simulate how and where fluids are absorbed into the body. "Unilever want a model to use for comparisons, so they can say, 'here's a drug or chemical with this diffusion rate and this absorption rate, how does it compare to that?' It's not an exact model for the intestines, but you can use it to make comparisons, and get an idea of what is going on."

Current models are one-dimensional, and simply describe the changes in absorption over time, without taking spatial effects into account. "They parameter-fit to figure out what the absorption rates are; splitting the intestine up into several compartments with an equation for each compartment. But what I'm doing now is looking at how peristalsis affects absorption. Peristalsis is the name for the waves that travel down the intestine. It creates eddies that cause the food particles to move around and get closer to the walls.

"The equations had been done before but no one had really looked at applying them in this way. Generally, in pipe models you just assume that the fluid goes straight down, with no radial mixing, but what you really have is a moving wave in the pipe itself that causes some circulation, with particles that were at the centre moving closer to the boundary."

André explains that his "deliverable" - what Unilever want from him at the end of his PhD - is a graphics-oriented computer program customised for Unilever, with various parameters that can be altered to explore the absorption of fluids with different properties. His work is visually very appealing, and he customises sophisticated computer programs such as Matlab to display his results. "I've had to learn a lot of computer programming myself, and sometimes it's a pain... it took me two days to get the purple in these images I'm showing you! - just to get it so that each particle was coloured differently and have it blending in. You have to go deeper into the routine of Matlab, learn all the subcommands that you take for granted, and then adapt it, customise it. But on the whole I do enjoy programming, and this visual illumination is fundamental in explaining the maths I have done."

Above are some images André produced, showing the modelled passage of food through the intestine. "The black regions correspond to fluid initially in the centre line," he explains. "In previous models, you would assume that if there is no diffusion or absorption, then the particles in the centre would just go straight down the centre. In the model, the boundary is a standing wave, because the intestines expand and contract in time. You get different flow patterns depending on the speed at which the fluid travels, and the drop in pressure from one end of the intestine to the other - this is just one flow pattern. The image on the right is to show how the centre line keeps moving down the centre, but it also allows you see which particles go where."

André is currently unsure what the future holds. "I might do post-doctoral research; it depends what projects are on offer. Perhaps here, perhaps somewhere else, maybe abroad. There are other possibilities, though, like going into the city, which was one of the things I thought of when I started my first degree. Quantitative analysts use similar equations to fluid dynamics for their financial mathematics. My grandmother was a banker for years and years, and perhaps I might follow in her footsteps. I hope to have submitted by a year's time, then go travelling, have a holiday, and then apply for jobs. I've done seven years of straight study; I'm in the final year and I'm still pretty young, so I will put in applications for post-docs and positions in the city and then see what happens."

But André is certain that doing a PhD - and this PhD in particular - was the right step for him. "The reason I like this PhD is that I can adapt it to real life, I can explain my PhD to people, and I'm using lots of different things: different types of numerical analysis, fluid dynamics, biology, computing - I'm pulling everything together.

"I have learned a lot, lot more than I did as an undergraduate."