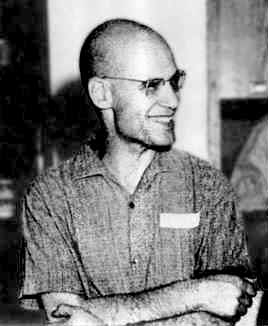 Grothendieck shot to the top of the mathematical world in the 1950s, when he was only in his twenties. Leaving aside an initial interest in analysis, he had started to work on problems in algebraic geometry, an area of maths that, as the name suggests, uses algebra to study geometric objects.

The overlaps of geometry and algebra are familiar even to school students. A circle of radius 1, for example, can be described, as a result of Pythagoras's theorem, by the algebraic equation x2 + y2 = 1, and the equation y = x2 describes a parabola. More complicated algebraic expressions describe more complex and higher-dimensional geometric objects. In its most general form, this idea is encapsulated in mathematical objects called algebraic varieties. It is work on just these varieties that propelled Grothendieck to mathematical stardom. In 1957, although almost a complete novice in the area, he generalised an existing result, betraying a deep insight into the abstract worlds involved.

Grothendieck did not stop there: he conceived a whole programme of research in the area, which he started to put in practice with a range of brilliant students, many of whom later turned out to be eminent mathematicians themselves. Grothendieck's work laid the foundations for much mathematics that was to come in the future. Fermat's famous last theorem would have been impossible to prove without the groundwork of Grothendiek's team, and also exemplifies his belief in the deep connections between geometry and number theory. Grothendiek's contributions were honoured by the prestigious Field's Medal in 1966 and the Crafoord Prize in 1988.

But despite Grothendiek's achievements there will be no lavish banquets to celebrate the occasion. Grothendieck retired from mathematics in 1988 and is now said to live in complete isolation in the South of France. The reasons for this, like the protagonist, are complex. Grothendiek had a troubled childhood spent on the run from the Nazis, at times in refugee camps and children's homes. His Russian and Jewish father was an anarchist, spent time in Russian prisons and was sentenced to death twice. He eventually died in Auschwitz at the hand of the Nazis.

His parents' political persuasions influenced Grothendiek's own, and he was deeply impressed by the political and cultural changes of the 1960s. This may be partly to blame for his retirement from mathematics. In 1966 he refused to travel to Russia to accept his Field's Medal, in protest against the imprisonment of Russian writers (the 1988 Crafoord Prize he refused altogether). A little later, he went to Hanoi to register his protest against the Vietnam war. In an era where direct action was pivotal, mathematics may have seemed just a little too esoteric. The reason for Grothendiek's leaving, in 1970, the Institute des Hautes Études Scientifiques, where he held a chair, seems to be the fact that it was in small part funded by the French ministry of defence.

As Grothendiek gradually left the world of maths, he devoted himself to studies of philosophy and religion and became active as an environmental campaigner. He wrote volumes on these subjects, to date largely unpublished, as well as accounts of his own work and the world of mathematics, not always entirely friendly. He is said to have developed an interest in the nature of creativity and creation.

It's hard to know whether or not Grothendiek himself will be reading the birthday wishes appearing online and in print. But if he does: happy birthday!