This article first appeared on the FQXi community website. FQXi are our partners in our Information about information project. Click here to read other introductory articles on information.

In England, where I live, I love going for long walks in the countryside. Rustling noises in the undergrowth don't generally give me much of a fright; they even tempt me to investigate what might be causing them. A rare bird, a deer, a fox? Fortunately for me, there are no animals in England that would like me for their dinner. How different it would be if I'd be wandering through the rain forests of India, where a similar rustle might signal something much less benign, maybe even a hungry tiger close by. Having watched countless wildlife documentaries, I would rather not hang around to find out for certain and should beat a hasty retreat just in case. 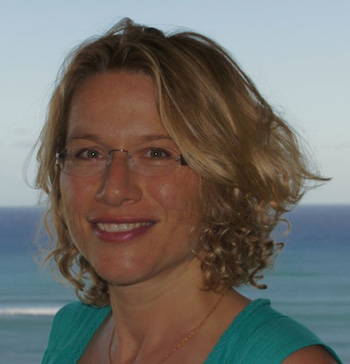 Organisms — humans, animals and arguably even plants — have a striking ability to predict what their environment might throw at them. They use information from the past to respond to cues in the world and learn from surprises, meaning that when they encounter similar situations again in the future, they can act faster and more appropriately. In fact, this so-called predictive inference is such an important skill that it helps organisms to stay alive. But Susanne Still and Gavin Crooks think that this ability might also hold the key to understanding how all types of living systems behave efficiently in the natural world — perhaps with a little help from quantum information processing. Their work may even reshape how we think about life itself.

The idea that living organisms use predictive inference to help them perform better in the future is relatively straightforward to grasp. A more radical notion is that this process might also be present at much smaller scales, down to the molecular complexes that perform specific tasks within the cells of living organisms, or the "machinery of life" as Still, an information and computer scientist at the University of Hawaii at Manoa, refers to them. "Bio-molecular machines are the building blocks of our cells and there is evidence that they operate at very high energetic efficiency," says Still.

Where does this efficiency come from? In 2012, Still, along with Crooks, a physicist in the physical biosciences department of the Lawrence Berkeley National Laboratory in San Francisco, and other colleagues, carried out a theoretical analysis based on classical thermodynamics (the science of heat and energy transfer) that showed that there is a connection between the energetic efficiency of a biological system and the information that it processes and stores (see this paper). They considered the way in which systems, including biological machines, might contain certain information< that is based on past experience and which is involved in predictive inference as well as non-predictive information. What they discovered was that there is greater energy loss in systems with a higher proportion of non-predictive information. Predictive inference can give systems a real advantage, explains Still: "If we were playing a game in which we had to exchange energy between us and I could predict what you are going to do at the next stage, then I could harvest more energy out of you, and so I could do better than you."

Still and Crooks have now won a grant of almost $130,000 from the Foundational Questions Institute to find out whether their ideas are right. A major aim of their project is to find out whether systems can do better in terms of energy efficiency if they are capable of using predictive inference. "We want to look at whether the machinery of life can do something that smart on every scale," says Still. "If so, is predictive inference one of the things that distinguishes the machinery of life? That would be a fascinating insight."

Part of Still and Crooks' project involves bringing aspects of physics to bear on questions that are traditionally thought to lie within the realms of biology. There is a long history to attempts to bring these disciplines together to understand life. In 1944, the theoretical physicist Erwin Schrödinger, one of the founding fathers of quantum theory, published the essay, What is Life? which is still cited today. Schrödinger realised that living things behave differently from non-living things: while under most circumstances matter descends into disarray fairly rapidly, living matter manages to exist and interact with its environment far beyond the time expected for inanimate matter. Non-living systems quickly reach what is called in physics thermodynamic equilibrium — a state of balance that does not change over time. By contrast, he realised that life evades equilibrium for a long time and when living systems finally do reach equilibrium, they are essentially dead.

For Still, the key notion that helps differentiate life from inanimate matter is self organisation, although how exactly this happens in biology is not well understood. "The process of self-organisation in biology leads to the effect that in living systems the whole is more than just the sum of its parts," says Still. "We don't yet understand the organising principle that underlies this self-organisation or indeed whether such a principle even exists."

Arguably, there are two candidate optimisation principles that might underlie this self-organisation process, or, as Still terms it, "that really colourful variety of life." Both concern the proficient and effective use of the resources that are available to the system: on the one hand, efficient use of energy; on the other, the efficient use of information. In their 2012 paper, Still and Crooks proposed that these two principles might in fact be interdependent. "We have shown that there is a connection between the dissipation of energy far away from thermodynamic equilibrium and that part of the system's memory which is not informative about the future," says Still. "The way in which a system reacts to its environment betrays how much intelligence is built into the system."

Moreover, efficiency is only one side of the coin. If a system were only concerned with optimising efficiency, its decision making could end up being dangerously, even fatally, slow: "I could figure out with very high accuracy that that tiger over there is going to eat me, but if it would take me a long time to figure that out, then the tiger will eat me," she explains. "The tiger will also get me if I move too slowly, even if that might lower my energy consumption, so clearly there are times when I want to use all my resources to survive." In biology, time is often of the essence, and to avoid danger and gain most benefit, living things may sometimes need to choose speed over accuracy and efficiency. And if this occasionally means spending unnecessary energy running away from tiger-shaped shadows, that is likely an advantageous trade-off if it keeps you from the jaws of big cats

Still believes that an organism's ability to perform predictive inference might again be key in giving it an edge when speed is concerned: "If I use my memory to predict what the environment is going to do, can I get a better efficiency at the same speed than a system that is not predicting? And so one of the key questions of our proposal is: is it possible that predictive systems have improved the trade-off between speed and efficiency?"

When thinking about the speed of information processing, physicists often turn to quantum theory. After all, quantum computers, in principle, should one day be able to perform certain tasks far faster than today's classical machines, by harnessing the laws of subatomic physics. In recent years, biologists and physicists have been investigating whether quantum processes could help speed up tasks in large-scale living systems too. (See the article Quantum biology: making waves in the natural world.) 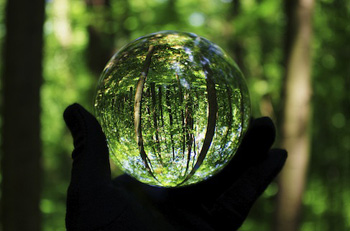 Is life defined by its ability to predict the future by examining the environment? Image: Pedro1960.

A similar realisation occurred to Still, though it came about serendipitously, precipitated by Arne Grimsmo, a physicist now at the University of Sherbrooke, Quebec. "I was doing research in quantum information theory at the University of Auckland when I read Susanne's article and pretty much immediately realised that I could map her model onto a quantum mechanical analogue," says Grimsmo. He initially posted his results, on arXiv.org, where Still read them, before they were published in Physical Review A (see here). His theoretical analysis reached similar conclusions for quantum systems as Still and Crooks' work on classical systems: non-predictive information is related to increased energy loss. Still emailed Grimsmo immediately. "We both got very excited about trying to get together and discuss things further," Grimsmo says.

Still and Grimsmo have been collaborating ever since and are about to take the idea to the next level. They plan to generalise a well-known method for finding optimal encodings of predictive information to the quantum regime. "This will allow us to compare optimal classical and quantum solutions, and hopefully answer whether there can be a quantum advantage to prediction or not," Grimsmo explains. Even finding situations where there is no quantum advantage would be interesting: "Such a result could perhaps tell us something about why most biological systems that predict do not, after all, seem to do any quantum information processing," says Grimsmo.

Still passionately believes in the fundamental potential of their research. "The reason why we need a better understanding of how the machinery of the world works," she contends, borrowing from the author Jorge Luis Borges, "is simply for the sake of understanding it."

But perhaps much more exciting is the possibility of gaining a new understanding of life itself. Rather than life being a set of biological attributes, such as the need to eat, reproduce or excrete, we might start to consider whether or not a system is alive in terms of how it processes information and makes predictions. "If it's true that the way in which living systems differ from non-living systems is by means of efficiency with which they process information and thereby also energy, then that would give us a different view of the world around us," Still says. "It would give us a whole different way of defining what it means to be alive."

"The way in which a system reacts to its environment betrays how much intelligence is built into the system."

Some biomimetic approaches seem to entail building in the kind of intelligence that minimises sensory resources in the interests of greater efficiency and speed:

"To give robots powers we don't have, such as flying, Ayers and his colleagues are copying the electrical activity of insect nervous systems, with the aim of creating an artificial bee that could pollinate plants. Previous attempts to imitate animal movements have relied on building equivalents of specific abilities, like magnetic compasses and air velocity sensors, but such robots are still controlled by computer algorithms. 'The problem with algorithms is that you have to anticipate every possible situation and have a determined escape strategy for each' says Ayers. That's a pain when you're doing something as prone to variation as flying. His team's secret is circuit boards that produce chaotic electrical signals - much as real neurons are thought to - allowing a multitude of possible solutions to be explored on the fly. 'Chaos allows you to explore your full parameter space until you find a solution that allows you to escape' says Ayers. . . . He showed how his team had controlled the flight of a small toy helicopter with a synthetic nervous system."
(New Scientist, "Machines come to life. By building robots using the principles of biology, we can sit back and wait for intelligent behaviour to simply emerge" 18 January 2014)

Is this predictive inference in action, or does it differ from ad hoc behaviour modification in which a range of random predictions are rapidly tested and discarded? In the latter case each prediction - discardment cycle seems to correspond to a biochemical reaction which is easily reversed and therefore thermodynamically efficient.