Sometimes, mathematics may seem like a collection of procedures and techniques, rather than the beautiful consistent whole it really is. One such collection of rules tells us how to find the slope, or "gradient", at a specific point on a curve described by a function. This is better known as differentiation, and is one part of calculus.

This article is the first of a pair which aim to help students encountering calculus for the first time. You do not need to know how to differentiate in order to follow, so it could be used as an introduction to the subject. However the second article will assume you have encountered differentiation as such a set of rules.

at every point. The message here is not that we want the answers, which, if you have encountered calculus before, you probably know are

respectively, but rather the method, which gives us a taste of limits. The topic of limits belongs to a subject known in mathematics as analysis. This is a central core underpinning much of the machinery of applied maths.

In the next article we will briefly recap how to avoid the case-by-case arguments we have used here by manipulating the algebraic expressions with which we usually describe functions. This is differentiation as we know and love it! We will also think about how functions are built from component parts, and how we differentiate a function by considering these parts individually and how they are combined.

Let's start with a simple example, by considering the straight line shown in figure 1 below. The gradient of the line is defined to be

If we take any two distinct points

on the line, the gradient is defined as which doesn't depend on which points we take. Defining

in this way, the equation of the line is where

is the value of

at the point where the line crosses the

Figure 1: The gradient of a straight line

But what should we do with curves that are not straight, such as the graph of the function

, shown in Figure 2 below? Let's choose the point

, and try to decide what it means for the curve to have a gradient at the point

at that point". But since we haven't a clue what the gradient is yet, we can't! Instead, let's try to make some sense of what a tangent line could be.

So, imagine you have a magnifying glass or microscope and you take a closer look at the function around the point

. Imagine you can increase the zoom and keep zooming in to get a closer look at the function around the point (3,9). If you do this, very soon the curve seems to straighten out. For very high magnifications, the curve

actually looks like a straight line. We say that at the point

appears to become straight under magnification. So, we attempt to define the gradient of

as the gradient of the straight line which appears under very high magnification.

A note of caution, though. It is very important indeed that you magnify in both the

directions equally and simultaneously. If, for example, you continually stretch the

-axis, the function will eventually appear to become flat! This is very misleading.

As you may already know, the formal process of differentiation allows us to calculate the value of this gradient at any point on a function that appears to become straight under magnification, not just at

say. In a moment we will demonstrate that the gradient of the curve

at a point is

, by examining a limiting argument.

Have a look at the graph below. This looks very complicated but it too appears to become straight under magnification. A small area around

has been magnified twenty times. In fact, if we magnified the function further it would quickly appear to be locally straight, and we could decide how to draw a tangent line.

Figure 3: A "spiky" function which is actually smooth, and even appears to become straight under magnification

So just looking casually at the graph itself is not necessarily a good guide as to whether the function appears to become straight under magnification, or not. However many commonly encountered functions, such as polynomials, and also the functions

, will appear to become straight under magnification. Simply applying the formal rules of calculus in a mechanical way, without giving much thought to what you are doing, is also fraught with danger. The very fact that calculus is so effective, and the wealth of functions to which calculus may be applied, sometimes lulls the careless into thinking that all functions appear to become straight under magnification.

Some functions which do not become straight under magnification

, which is defined as 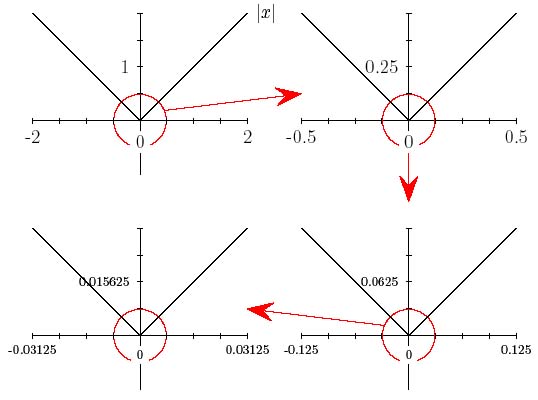 Figure 4: The graph of |x| at various magnifications

is shown above under different degrees of magnification. It always appears "kinked" around the point

. We can never fit a straight tangent line to the curve at the point

. However, away from the point

is straight. The gradient of the function away from 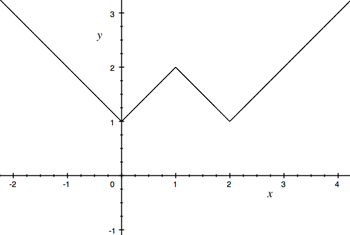 There are many other functions which do not become straight under magnification. Simply adding together shifted versions of

, will allow us to produce many different functions with "kinks". For example, the graph of the function

is shown to the left. 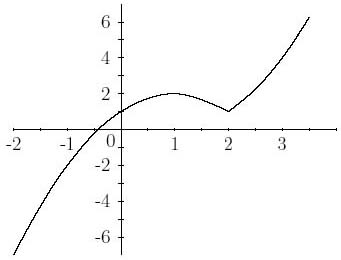 And shown to the right is the function

. This has a kink at

, but is not made of straight line sections.

In addition, it is possible to produce functions with an infinite number of such bad points. In fact, the graph shown below is of a continuous function which has a "kink" at every point! More correctly, we cannot define the gradient at any point of the curve. 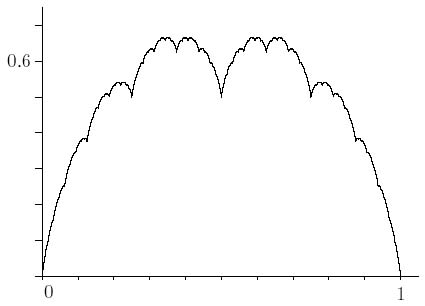 Figure 7: A function which does not become straight under high magnification anywhere

Examples such as this were ignored as monsters by some 19th century mathematicians who argued about whether they were even functions. However, these are what make mathematics surprising and interesting. In fact, such examples are much more common that experience applying calculus to textbook examples would lead us to believe. Importantly, such objects, known as fractals, turn out to be very useful for describing the shapes of physical objects such as mountains, coast lines, fractures, cracks and so on. This is perhaps the most famous example, and is constructed by adding together an infinite number of of saw-tooth-like functions.

Other examples are a little easier to handle algebraically, but it is harder to prove they are "monstrous". Two such examples are

Calculating gradients of some simple functions

So far, we have done very little mathematical calculation or problem solving, and only discussed what happens when we look at the graphs of curves under magnification. Now we will try to calculate the gradient of a curve by manipulating the formula for the curve itself. We will calculate from first principles the gradient at every point of the two very familiar basic functions:

. Although you may already know the answers -

respectively - we are really interested in the method for finding them. Then we explain what goes wrong when we try to apply this method to the function 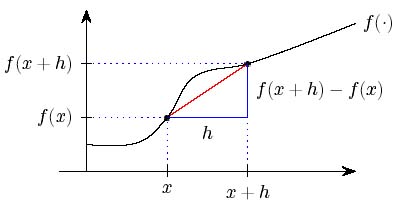 Figure 8: Calculating the gradient of a general function

To the left is the graph of a function

at which we want to try to define the gradient. One way to think about the gradient is to draw a straight line connecting the points

on the curve. We may calculate the gradient of this straight line using equation (1): it is equal to

This quantity is the change in

divided by the change in

, and this gradient is

Since we are interested in functions that appear to be straight under very high magnification, we are most interested in what happens when

are close together. This happens for very small positive and negative

is quite large. You will have to imagine for yourself what happens when

is small, or when

as that would mean dividing by zero, which makes no sense.

Let us consider the concrete example

is very small - positive or negative - we may approximate

. If we think about what happens as

gets very small indeed, in the limit we have the slope of the tangent line. By a limiting argument, which can be made watertight mathematically, we say that the function

does indeed become straight under magnification because we can make sense of the slope of the chord, in the limit when

is very small indeed. The limiting slope of the chord defines the slope of the tangent. In this case the limit is

. Therefore, we say the gradient of the tangent line is

, although in this case we knew that already. 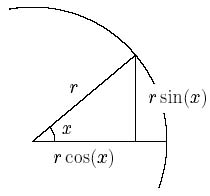 Figure 9: The definition of the trigonometrical functions sin(x) and cos(x)

Next we attempt to deal with the function

is an angle in a right angle triangle with hypotenuse

Before we calculate the gradient of

we need to think for a moment about angles, and more particularly about the units with which we measure angles. Recall that given a circle of radius

. If we have a fraction

of a whole circle we have arc length

. Generally we don't talk about fractions of a circle, but rather an angle measured with some system of units. Two common methods are to use

radians. If we use an angle

, the arc length will be

is a constant that depends on the units of angle you use. If we use radians, then

, which is the whole point of using radians! Therefore, if we have an angle

measured in radians, the arc length is simply

To calculate the gradient on the curve of

, we need to evaluate

To do this we examine the diagram below, which gives us a clue as to how to estimate

Here we have taken r=1. Each occurrence of the angle x is marked with a

. Next we approximate the hypotenuse of the small triangle with right angle at

, as the arc length of the circle, which is

. For small values of

, which we need to consider when finding the gradient, this is a very good approximation indeed. Therefore, since we have taken the radius

and so Therefore the gradient of

depends on the units we use to measure the angle. If we use radians then

. This is the reason for adopting radians in mathematics, rather then degrees which are very convenient for more practical measuring purposes. Although

does not appear in this formula, we assumed that

was small in order to estimate the hypotenuse as the arc length. This allows us to calculate the gradient of the curve

The diagrams in Figure 4 show convincingly that

is not locally straight at

. What happens if we try to calculate the quantity in formula (2) in this case? Well,

and so this quantity equals

. On the other hand, for all

, so this quantity equals

. Thus as we approach

from the positive direction the gradient appears to be

, and from the negative direction the gradient appears to be

. Since these do not agree, we cannot define the gradient at

in a meaningful way. This confirms that

is indeed not straight under magnification at

In the next article we will continue this discussion and examine some formal rules which drastically reduce the effort necessary to calculate the gradient. We will also think about about how functions are built up in different ways, and how these rules are applied in much more complex situations.

The following exercises are suggestions of things you could work on to test whether you can adapt the arguments above to a new situation. There are no answers here to encourage you to work on them yourself. 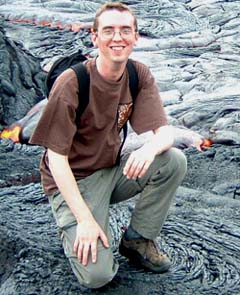 Chris Sangwin is a member of staff in the School of Mathematics and Statistics at the University of Birmingham. He is a Research Fellow in the Learning and Teaching Support Network centre for Mathematics, Statistics, and Operational Research. His interests lie in mathematical Control Theory.

Chris would like to thank Mr Martin Brown, of Thomas Telford School, for his helpful advice and encouragement during the writing of this article.