The Kepler telescope has delivered again. Yesterday scientists at the University of Birmingham announced the discovery of a Sun-like star, called Kepler-444, which is orbited by five planets with sizes similar to those of planets in our own solar system. Kepler-444 was formed 11.2 billion years ago — it is the oldest known system of terrestrial-sized planets in our Galaxy. By the time our own blue planet formed, the planets in the Kepler-444 system were already older than the Earth is today. 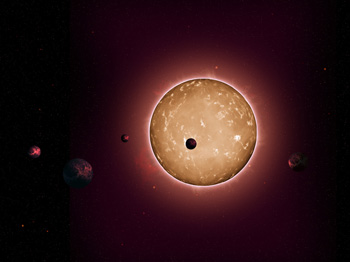 An illustration of Kepler-444 and its five planets. Image: Tiago Campante/Peter Devine.

The first question most people are likely to ask is whether those newly-discovered planets could harbour life. With so much time to evolve, it's tempting to imagine them hosting super-advanced civilisations with unheard-of technologies. Unfortunately (or perhaps fortunately) the answer is "no": the newly-discovered planets are too close to their star to harbour life. But scientists still hope that the discovery will shed important light on how planets form. "We are now getting first glimpses of the variety of galactic environments conducive to the formation of these small worlds," says Bill Chaplin of the University of Birmingham, who played a leading role in the research. "As a result, the path towards a more complete understanding of early planet formation in the Galaxy is now unfolding before us."

The new worlds were discovered using something called asteroseismology - listening to the natural resonances of the host star which are caused by sound trapped within it. These oscillations lead to miniscule changes which allow the researchers to measure its diameter, mass and age (you can find out more about asteroseismology in A new kind of singing star). The planets were then detected from the dimming that occurs when the planets pass across the stellar disc. This fractional fading in the intensity of the light received from the star enables scientists to accurately measure the size of the planets relative to the size of the star.

If you'd like to find out more about how planets form from minuscule specks of dust, read our recent article From dust to us. And to read more about the search for life, see Hunting for life in alien worlds. Or, if you'd just like to sit back and watch, have a look at the animation below. It starts by showing us Kepler's field-of-view in the direction of the constellations Cygnus and Lyra. We are next taken to the vicinity of the Kepler-444 planetary system, located some 117 light years away. Its pale yellow-orange star is 25% smaller than the Sun and substantially cooler. The last segment of the animation emphasises the compactness of this system. The five planets orbit their parent star in less than 10 days or, equivalently, at less than one-tenth Earth's distance from the Sun. In a way, this system may be thought of as a miniature version of the inner planets in our own Solar System. (Animation by Tiago Campante and Peter Devine.)