Football: Was points per game fair?

Due to the COVID-19 pandemic, many football leagues around the world had to finish their seasons early with fixtures unfulfilled. Some of those leagues abandoned their seasons altogether, ruling them null and void, resulting in no promotions nor relegations. Alternatively a number of curtailed leagues decided to award final placings based on results that had been achieved so far. In those cases, the average points per game (PPG) was used as the deciding measure. 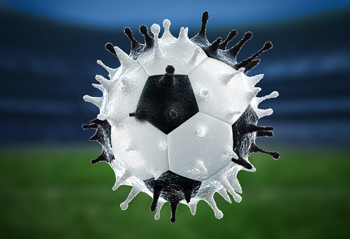 Due to COVID-19 football leagues had to be suspended.

However, in an earlier article, I suggested that PPG may not be a fair performance measure as it didn't take into account the following two important factors. Firstly the number of home and away games played should be considered. When included, this gives us a new measure which has since been called weighted points per game (WPPG) in many quarters. Secondly, crucially we should consider the difficulty of opponents that teams had played so far. I proposed an alternative measure, adjusted points per game (Adj PPG) which accounted for both these factors.

Some leagues, such as the Premier League, managed to complete their remaining fixtures. Hence in this article I use the Premier League results to compare what actually happened with what was predicted using PPG, WPPG and Adj PPG, and determine which of those three was the most accurate, or fairest.

Qualification for Europe and relegation

Below is the final Premier League table and the tables which show what the result would have been if Adj PPG, PPG, or WPPG had been used.

We can see from the table above that all three measures forecasted exactly the same top five positions. They were successful in predicting which teams would make up the top five, but placed Leicester (who finished 5th) and Man Utd (who finished 3rd) the wrong way around. The final Europa League place was taken by Tottenham, but this was not predicted by any of the measures.

Regarding the bottom three, Adj PPG and PPG both correctly predicted two out of the three teams that were relegated, namely Norwich and Bournemouth, whereas WPPG only predicted 1 correctly, erroneously projecting West Ham for the drop.

Based on these simple indicators, this suggests that Adj PPG and PPG would have been equally appropriate measures, with WPPG less so.

More importantly, it would be informative to assess the overall predictive accuracy for the whole table for each of the three measures. One way to do this is to compare the actual final points for all the teams with the points predicted by each measure.

By multiplying the values from the table above by the number of games played, 38, we can obtain the predicted number of points for each team. These are shown in the table below along with their differences from the actual points.

The averages of the absolute differences (i.e. ignoring the minus signs) are:

PPG scored the worst (4.1), WPPG performed slightly better (4.0), and the best achieving was Adj PPG (3.7). This suggests that Adj PPG is the most accurate of the three at predicting final league points.

None of the three measures, Adj PPG, PPG, and WPPG, were by any means perfect at predicting what actually happened in the Premier League. However, based on the calculations above, it can be asserted that PPG, the method actually employed globally by many football leagues for deciding curtailed seasons, is not as fair as Adj PPG. If faced with the same decision again, and with the COVID threat still lingering over us this is a not altogether unlikely possibility, the football leagues should think carefully about whether PPG is most appropriate, or whether Adj PPG would be more suitable.

Read more about...
mathematics in sport
football
Tweets by plusmathsorg