The unity of mathematics: a meeting in honour of Sir Michael Atiyah

Richard Feynman: "If all mathematics disappeared overnight, physics would be set back by about a week."
Michael Atiyah: "That was the week that God created the Universe"

In September 2021 the Isaac Newton Institute held The unity of mathematics, a conference in honour of Sir Michael Atiyah. Atiyah, who passed away in 2019 at the age of 89, was a towering figure in mathematics. In a career that spanned nearly seven decades he dominated and shaped the field, not only advancing mathematics itself but also pioneering deep connections between mathematics and theoretical physics. 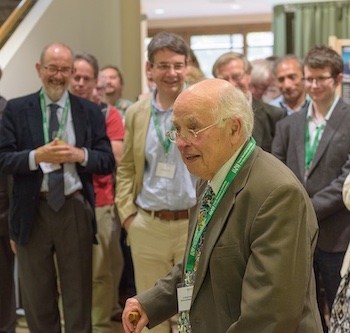 Atiyah attending an earlier conference at the INI (Photo: INI)

"Michael was such a completely outstanding person, we thought that we needed to do something rather special to honour him," says Caroline Series, who co-organised the conference and was President of the London Mathematical Society (LMS) at the time of Atiyah's death. The LMS spearheaded the event and, since Atiyah was the founding Director of the INI between 1990 and 1996, the INI was the perfect choice of venue.

"This meeting is a memorial to Sir Michael," said Nigel Hitchin, who headed the scientific committee, in his opening talk. "But the intention is not so much to discuss his influence and legacy, but to present a cross-section of current ideas — the sort of things that he would enjoy listening to and talk about afterwards."

The conference was a hybrid event with people attending in person and remotely from around the world, and you can still watch many of the talks online at the INI website. The title, The unity of mathematics, was inspired by Atiyah's 1976 address as LMS President, a role he held from 1974 to 1976. "The aspect of mathematics which fascinates me most is the rich interaction between its different branches, the unexpected links, the surprises...," he wrote then.

The speakers at the meeting were chosen to highlight the depth and breadth of Atiyah’s interests, to illuminate surprising connections, and to represent a range of mathematical generations.

Atiyah started his career working in pure mathematics, in particular in the fields of algebraic geometry and topology. A famous result from this pure era is the index theorem, which Atiyah proved with Isadore Singer in the 1960s. Loosely speaking, the theorem tells us that, under appropriate circumstances, the number of solutions of a system of differential equations depends on the topology of the space the system is defined on. 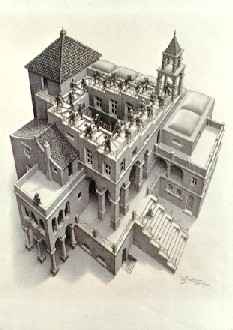 For an illustration of the result, think of M.C. Escher's famous paradoxical lithograph Descending and ascending. The picture shows people ascending (or descending) a staircase forever, without ever making it beyond the ceiling (or floor) of the building they are wandering around in. In this case the Atiyah-Singer index theorem tells us that any system of equations describing the set-up has no solution. The theorem proves that Escher's imaginary staircase is physically impossible. (You can read more in Count-abel if not solve-abel.)

The index theorem links analysis (of which the study of differential equations is a part) and topology, illustrating the fertile ground that can be found in the fault lines between mathematical fields. It won Atiyah and Singer the prestigious Abel Prize in 2004 and can be seen as the culmination of the first part of Atiyah's career — an era entirely untroubled by potential applications the work might have in the physical world. As Atiyah wrote in the preface to Volume 4 of his Collected Works, "My knowledge of physics was very slim, despite having attended a course on quantum mechanics by [Paul] Dirac himself."

To today's physicists, this would come as a complete surprise. "Every single part of the [index theorem] equation would now be seen as basic field theory physics," said Bernd Schroers in his talk at the Unity of mathematics conference. "To think that this came out of work that wasn’t looking at physics is extraordinary."

Intrigued by the impact his work had turned out to have on theoretical physics, and influenced by Singer as well as the eminent Roger Penrose, Atiyah himself became interested in theoretical physics in the late 1970s, focussing in particular on the connections between physics and geometry. His mathematical prowess had an enormous impact, especially on the study of gauge theories: mathematical structures designed to describe the fundamental particles of nature and their interactions.

The grand aim of modern theoretical physics, including the gauge theoretical approach, is to unify all of nature's particles and interactions, describing them in a single mathematical framework. Deep mathematical understanding has become crucial in this, drawing on areas as far afield as number theory, and posing fascinating questions feeding back into pure mathematics. Until the end of his career Atiyah was there to make the connections, find the surprises, and solve many of the hard problems.

From strings to knots

The talks at Unity in mathematics reflected the broad range of Atiyah's interests. They covered topics in pure mathematics as well as theoretical physics, many of them mindful of the links between the two. Some talks explored Atiyah's legacy, while others revealed recent and striking connections between different disciplines.

The speakers, too, represented a good mix, including early and late career researchers. Edward Witten is a pioneer of string theory and was both a major influence on, and influenced by Atiyah. Witten's deep mathematical insight won him the 1990 Fields medal, and at the meeting he talked about an intriguing link between the Langlands programme, a mathematical framework that connects number theory and geometry, and theoretical physics. It was Atiyah who first suggested this link in the 1970s and then made influential contributions to its development.

On the other end of the career spectrum, speakers included Lisa Piccirillo who solved a long-standing problem in knot theory in her PhD published in 2020. Piccirillo's talk she explained her approach to solving this problem and how it provides new insights into knot theory and the study of the topology of three and four-dimensional manifolds. While her talk focussed on pure mathematics, it's interesting to note that knot theory, too, plays a role in theoretical physics. 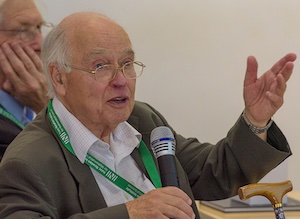 Atiyah was well known for sitting at the front of lectures, ready with comments and questions. (Photo: INI)

From those speakers who knew Atiyah there was no shortage of photos and anecdotes. Atiyah was known, not just for his mathematical ability, but also for his infectious enthusiasm. "Many of us have attended conferences where Michael would have been in the audience," Hitchin said in the opening talk. "You would have seen him sitting right at the front, interjecting various comments. [And in the coffee break] you would immediately have heard which part of the room he was in. Talking and listening was a fundamental part of his mathematics."

The Unity of mathematics conference set out to re-create this communicative atmosphere. More than half of the in-person audience consisted of PhD students and early-career researchers. "They were just so happy to be able to come to an actual, real conference and talk to people and network," says Series. "The older people who came were equally delighted to have a chance to see people again."

On the whole, Series says, the Unity of mathematics conference was a success. "Michael's interests were so broad and deep; he inspired so many people in so many different directions. I really think he would have enjoyed this conference."

This article was produced as part of our collaboration with the Isaac Newton Institute for Mathematical Sciences (INI) – you can find all the content from the collaboration here. A more technical version of this article will appear in an upcoming annual report.