Farewell to a legend

It is with great sadness that we heard of Sir Michael Atiyah's passing on January 11, 2019, aged 89. Atiyah was one of the most important mathematicians of the twentieth century — he has been described as a visionary, a genius, and even as the best mathematician since Isaac Newton. His contributions to mathematics are many and varied, but a lot of them focus on the interplay between topology — which studies the properties of geometric shapes that remain the same when the shape is stretched, squeezed or bent — and other areas of maths such as algebra and analysis. 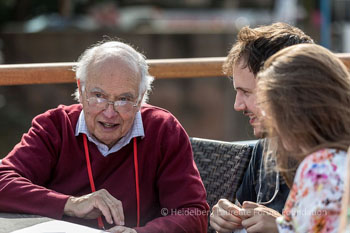 Atiyah's most famous result, the index theorem which he proved together with Isadore Singer in the 1960s, is an example of such a connection. Loosely speaking, the theorem tells you that the number of solutions a set of differential equations has is related to the topology of the space the equations are acting on. This result might seem rather abstract, but you can see how it can be useful using MC Escher's famous paradoxical lithograph Ascending and descending as an example. The picture has tireless wanderers ascending (or descending) a staircase forever, without ever making it beyond the ceiling (or floor) of the building they are wandering around in.

In this case the Atiyah-Singer index theorem tells us that any model of the staircase and the wanderers' motion has no solution, essentially because the topology of the square shape of the staircase does not allow a solution which has the height of a wanderer always increasing (or decreasing). In other words, the theorem proves that Escher's imaginary staircase is indeed physically impossible — a relief to mathematicians who never like to rely just on their personal experience of the physical world. (You can find a more detailed description of this problem here.)

Since mathematicians aren't the only people who regularly find themselves faced with equations that need to be solved, the index theorem isn't only useful in maths. Just as the index theorem can help prove that Escher's staircase is impossible, it can give important insight in other contexts too. Indeed, the theorem has led to an extremely fruitful cross-fertilisation between maths and theoretical physics, helping, for example, in the development of string theory and quantum field theory, and even pointing to new directions in physics. Atiyah was awarded the two most important accolades in maths — the Fields medal (in 1966) and the Abel prize (in 2004) — on the strength of this result and its consequences. 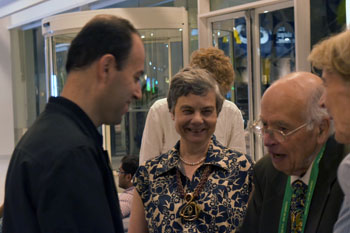 Those who have known Atiyah will not only miss him for his mathematical genius, but also for his wit and personal warmth, which he extended to everyone from fellow mathematical superstars (such as Fields medallist Caucher Birkar shown in the picture on the left) to the budding, young researchers who have attended the Heidelberg Laureate Forum over the years. We may not always have understood the maths Atiyah talked about on the occasions we met him, but we always enjoyed his jokes and always came away with a smile on our faces.

A look at Atiyah's entire mathematical legacy will have to wait until a later time. For the moment, we leave you with two of our favourite quotes attributed to him:

"I dislike frontiers, political or intellectual, and I find that ignoring them is an essential catalyst for creative thought. Ideas should flow without hindrance in their natural course." 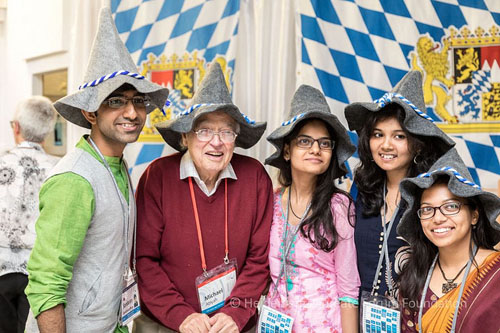 You can read more about Atiyah and his work in