"Being born 300 years after Galileo's death and taking up the Lucasian chair in mathematics 310 years after Newton, Stephen Hawking was numerologically well prepared for his successes and achievements", said Sir Alec Broers, the Vice Chancellor of Cambridge University, in his introduction to the Stephen Hawking 60th Birthday symposium. The title of the day was The future of theoretical physics and cosmology, and an important part of that future, according to the Vice Chancellor, was due to Stephen himself.

Professor Hawking's birthday symposium was not just a chance for the academic community to honour these successes and achievements. A large crowd of students and members of the general public were there to wish him a happy birthday and to see some of the most eminent scientists of our day in the flesh. Even the Edge from U2 was there! The day was covered by television crews from Channel 4, the BBC and CBS in America, with a live webcast of Hawking's lecture direct to the BBC's website. 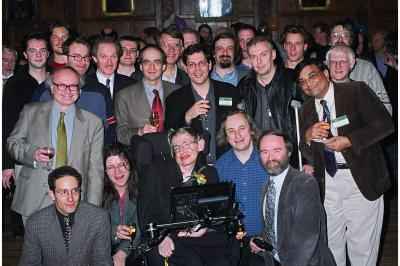 The public symposium followed a four-day scientific workshop, which was a chance to get together with old friends as well as to review the current state of cosmology. "There are people here that say scientifically this has been a very intense meeting. And other people like me will say that the fun part is seeing people!" said Professor Bruce Allen, an early student of Hawking, who is now at the University of Wisconsin. Professor Nick Warner, one of the last of Hawking's students to live in his house, agreed. "It's been nice to be able to eat and chat with people". Nick said that, although it wasn't unusual to have extremely good people at a scientific meeting, it was unusual to have leading people from such diverse areas.

"The names!" drew Maria Pereira to the symposium, summing up the feelings of many of her fellow students. Feraz Ashar, also a student at Cambridge, attended the prior academic workshop. "I got the opportunity and didn't want to miss the chance to see these people", he said.

The "names" in question - Sir Martin Rees the Astronomer Royal, Professor James Hartle from Santa Barbara University, Sir Roger Penrose from Oxford and Professor Kip Thorne from Caltech - some of the most eminent and famous scientists of our day - gave public lectures covering the history of cosmology and our current understanding of the cosmos, as well as the future prospects for the field. The day culminated with Professor Hawking giving us a personal view of his life in science, which ended with a rousing (if not tuneful!) chorus of "Happy Birthday" from the audience.

Martin Rees - Our complex cosmos and its future 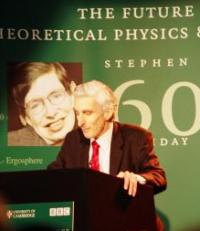 In filling a position initially created by Charles II, Martin Rees' job description as the Astronomer Royal has changed somewhat from the 17th century. Safe navigation of the high seas has made way for making the cosmos safe for us all, according to his introduction. His talk focussed on two key questions - "Why is the universe the way it is?", and "How did it get this way?" - providing an excellent overview of the field of cosmology.

"We are nuclear waste of the makings of the universe", said Rees, as he described the very early stages after the Big Bang. Putting us in perspective, Rees explained how the values of just a few parameters permit us to exist. It is only because the force of gravity is so weak, and the smoothness of the universe just right, that it was ever possible for galaxies to form in a way that allowed our evolution.

Rees discussed a current open question in cosmology: "Is the universe closed, flat or open?" That is, is it destined to end in a big crunch, or to expand exponentially, or is its fate somewhere between the two? He mentioned recent observational results that narrow down the value of the parameter critical to deciding which of these three fates is in store for our universe. But fortunately, "this cosmic endgame is very slow", said Rees, quoting Woody Allen; "Eternity is very long, especially near the end." 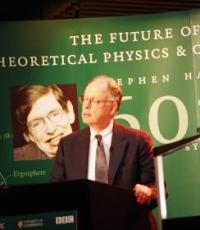 What do a cat, a cannonball and an economics textbook have in common? They all experience the same acceleration due to gravity when dropped from the Tower of Pisa! Thus James Hartle began his explanation that physics is a study of regularities, whether universal, such as in this example, or of specific systems. He told us that discoveries are made when such regularities can be observed.

Hartle went on to present a humorous and accessible account of why we are not going to get rich knowing the "Theory of Everything". Such a Theory of Everything, he said, would consist of two parts: dynamical laws and an initial condition. The study of dynamical laws has a long and distinguished history, since they can be discovered by observing local regularities. Aliens on another planet could have discovered the equality of gravitational acceleration by dropping things on their planet, just as Galileo discovered it here on Earth by hurling objects from the Tower of Pisa. However, it is only recently that the initial condition has been studied, as the regularities involved occur only on long cosmological scales.

Hartle discussed Hawking's wave function, which describes the initial quantum state of the universe. It does this in a probabilistic way and only some things are predicted with certainty. In fact, according to Hartle, "A Theory of Everything is not a theory of everything in a quantum universe. If it is short enough to be discoverable, it is too short to predict everything."

"We need a new theory to reconcile the scales at which the two great theories of 20th century physics operate", said Roger Penrose, "the scale of the very large in general relativity, and the scale of the very small in quantum mechanics". He explained how both of these theories "break down" at some point. For example, the classical-level physics associated with Einstein cannot cope with the singularities encountered at the centre of black holes.

What is needed is a theory to move between these two scales, a point Penrose illustrated with the example of a Geiger counter. It provides a magnification from a quantum to a classical level, where the incidence of a quantum particle produces a mechanical click. Penrose said that he was not satisfied with the current theories fulfilling this role, and finished by describing experiments using "crystal Schrödinger's cats" (which are much less cruel than experiments involving real Schrödinger cats!) to confirm his suspicions that we need a new theory to combine and explain quantum theory and general relativity. 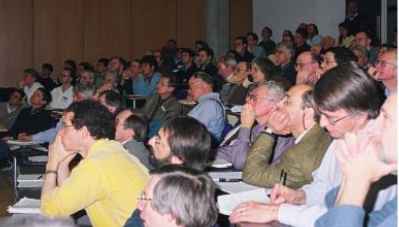 Kip Thorne's talk centred on the "prospects and plans for testing theoretical predictions from the Golden Age of Black Hole theory". Using some excellent visual explanations, he reviewed the history of black hole research, from when they were discovered and rejected, to the field's heyday in the '60s and '70s. Thorne described the predictions of black hole theory that will be put to the test by the laser interferometer LIGO in the next decade, and the massive space-based interferometer LISA due to be launched in 2011. He successfully conveyed his own excitement at the prospect of the field, matured on theory alone, finally having the chance to test its predictions with actual observations.

The human side of physics was emphasised when Thorne spoke of bets with Hawking over the existence of cosmological phenomena. As was the case with the other speakers, Thorne's talk was a personal view of the field. It culminated in his birthday present to Hawking. Thorne is well known for his interest in the possibility of time travel using worm holes, and for Thorne's 60th birthday, Hawking attempted to estimate the probability that a time machine could be created. In return, Thorne presented Hawking with a promise that by Hawking's 70th birthday, all of his black hole predictions would have been tested.

Stephen Hawking - 60 years in a nutshell 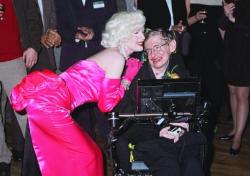 The auditorium was intensely quiet while we waited for Stephen Hawking to begin talking. There was a real sense of anticipation. Hawking broke the silence with his catchphrase, beginning "Can you hear me?" but the audience's quiet concentration remained throughout his entire talk.

He spoke about his life - "60 years in a nutshell" - concentrating on his scientific work since 1962, when he began his graduate studies at Cambridge. It was then that he entered cosmology, "a neglected field ripe for development at that time", and develop it did. Hawking has seen it flourish since that time, proving the physicist Richard Feynman wrong by showing that the field did not need experiments to survive.

Hawking presented the development of this field and of science in general as a personal journey, mentioning friendships, rivalries, competition and even friendly wagers amongst the conference participants. It was a picture of a life in science as just that - a person's life - and emphasised that the unparalleled "Eureka moments" of discovery were what made a life in science worthwhile.