How the Universe began 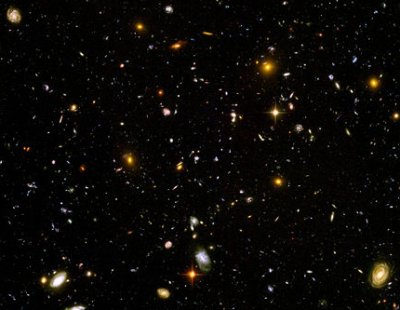 This image, produced from observations of the Hubble Space Telescope, looks back in time to a hotter, denser and younger Universe. Image courtesy NASA.

Just before Christmas some of the greatest minds of cosmology came together to celebrate the twenty-fifth anniversary of a conference that heralded a new era in early Universe studies. The 1982 Nuffield workshop, hosted by the University of Cambridge, was devoted to models of the Universe's birth, in particular the Big Bang model and the then brand new theory of inflation. It was a launching pad for inflation, which has since become an accepted theory in the field. In the week before Christmas the Centre for Theoretical Cosmology, also at Cambridge, recalled the original participants, as well as some new talent, to take stock of its development and discuss its future.

The Big Bang model suggests that the Universe expanded into its current state from a primordial condition of enormous density and temperature. The theory of inflation adds to this by proposing that at the very beginning — at around 10-35 seconds after the Big Bang — the rate of this expansion was exponential. Propelled by a repulsive gravitational force, the Universe grew by a factor of around 1050 — that's a 1 with 50 zeros at the end — within the tiniest fraction of a second.

A new theory was needed at the time because the original Big Bang model could not explain some of the most striking features of our Universe. Three problems were particularly bugging cosmologists: the horizon problem, the flatness problem and the magnetic monopole problem. The first of these addresses the fact that many of the Universe's physical features are roughly the same wherever you look. Travel a few million light years in one direction, and you'll find that the cosmic background radiation has pretty much the same temperature as you would have found by travelling the same distance in the opposite direction. If you encountered such a uniform temperature in, for example, a huge pot of soup, you'd conclude that someone at some point must have given it a good stir, so that hotter regions were able to trade some of their heat with cooler ones. Similarly, cosmologists concluded that different regions of the Universe must have been in contact at some point and able to influence each other. According to the original Big Bang model, however, such communication should have been impossible, as not even light could have travelled the vast distances between the regions in the time since radiation was released from matter.

The flatness problem, as the name suggests, involves the geometry of space. According to Einstein's theory of relativity, massive bodies curve spacetime. The shape of space is therefore intimately connected with the density of matter. Extrapolating back in time to just after the Big Bang, cosmologists found that the density of matter must have been very delicately balanced indeed: any more matter and the gravitational force would have been so strong that the Universe would have collapsed in a Big Crunch long before now; any less matter and the Universe would have long flown apart, becoming dark, empty and cold, and eventually dying in a Big Chill. Neither of these has happened, so the density of matter must have been just right. In fact, the value that the density must have taken is precisely the one guaranteeing that the Universe's geometry is Euclidean: it is not positively curved — the two-dimensional analogue of this would be the surface of a sphere — or negatively curved — like, in two dimensions, the surface a saddle — but flat. Surely this apparent fine-tuning is more than just a coincidence and any decent theory should be able to explain it.

The third problem involves unusual particles, including some that are akin to magnets with only one pole. These don't exist, you might say, and you would almost be right: they have never been observed. Unfortunately, Big Bang theory predicts that lots of these particles should have been produced at the birth of the Universe. The big question, then, is where on Earth and in the Heavens they are. 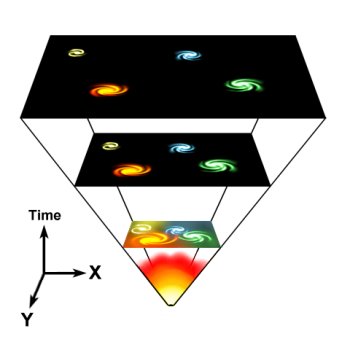 The Big Bang model suggests that the Universe expanded from an extremely dense and hot state.

The theory of inflation provides an answer to these problems. In the period just before inflation started, the Universe was still small enough for all matter and energy to interact and find an equilibrium that guarantees homogeneity of physical features. Inflation also worked to smooth out the Universe's shape: the mathematics underlying the theory shows that any old initial curvature would have been driven close to flatness by the process of inflation. Thus, it's no longer necessary to assume that the Universe started out in a curiously fine-tuned state. And although inflation does not do away with magnetic monopoles entirely, it predicts that they should be so sparse in space that it's no surprise we've never come across them.

The model of inflation is not without its own problems and there are various competing versions, but on the whole it is now the accepted picture of the early Universe. Ten years after its inception the detection of cosmic background radiation lent very strong support to the theory, and twenty-one years later it was finally confirmed in more detail by the Wilkinson Microwave Anisotropy Probe (WMAP), a NASA satellite whose mission is to measure the temperature of cosmic background radiation.

The original workshop was attended by all the leading developers in the field of very early Universe studies. The 2007 edition was attended by inflation's original proponent Alan Guth, as well as Andrei Linde and Paul Steinhardt who developed the theory's modern form, and Stephen Hawking. Guth, from the Centre for Theoretical Physics at MIT, introduced the conference by highlighting how interest in the field has increased over time: while there were only nine talks in the first week of the 1982 conference, there were eleven on the opening day in 2007. He also talked of the six successes of inflation, which, apart from the features mentioned above, include giving a number to how many particles there are in the Universe — around 1090.

Andrei Linde from the Department of Physics at Stanford University, spoke of waking his wife one late night in 1982 to tell her that he had discovered how the Universe started. He hailed early Universe studies as "the most exciting field of science in the last 25 years." Paul Steinhardt, from the Department of Physics at Princeton University, asked whether inflation had fulfilled its promise and pointed out that while it has become a standard model of the early Universe, it still isn't quite predictive enough. The 2007 conference aims to review the inflationary model and consider new theoretical developments in the field.