James Maynard, a mathematician from the University of Oxford, has won one of this year's Fields Medals at the International Congress of Mathematicians. The Fields Medal is one of the most prestigious prizes in mathematics. It is awarded every four years "to recognise outstanding mathematical achievement for existing work and for the promise of future achievement". Up to four mathematicians up to the age of 40 are awarded a Fields Medal each time. 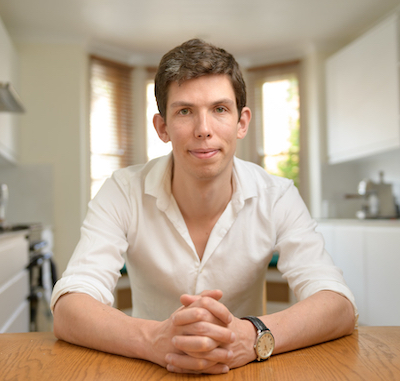 We were lucky to talk to Maynard in the run-up to this year's Congress, which is being held as a fully virtual event with only the prize ceremonies and lectures taking place in-person in Helsinki, Finland. He told us how he went from a fascination with numbers as a young child to making spectacular contributions to number theory.

"Number theory always had a slightly special status in my mind, even before I formally learned about it," says Maynard. Number theory – the study of whole numbers and how they can be combined with each other – has provided Maynard with an academic playground to build on his childhood fascination.

At the heart of number theory lie prime numbers – those numbers that are divisible only by themselves and 1. Because of this indivisibility they are often described as the atoms of number theory. Every other whole number can be "made" from these atoms in the sense that you can write it as a product of primes. The number 24, for example, can be written as

and the number 110 can be written as

In a similar way, every other whole number can be written as a product of primes.

Apart from the number 2, all the other primes are odd numbers, so the closest two prime numbers could ever be (once you get past the number 2) is separated by a difference of two. At first it's easy to find these pairs of primes that are as close as can be, called twin primes: 3 and 5, 5 and 7, 11 and 13 all separated by 2. But this gets significantly harder the further you go up the number line. Mathematicians believe there are infinitely many pairs of twin primes which is known as the twin prime conjecture.

The twin prime conjecture is one of those famous problems in number theory that are simple to state and have fascinated mathematicians for hundreds of years and yet a proof still remains out of reach. After centuries of effort there was a big breakthrough in 2013, when Yitan Zhang proved that there were infinitely many pairs of primes that are separated by 70 million. "For mathematicians this was absolutely a huge breakthrough as this was the first time we had [a proof of gaps of] any finite number," says Maynard. "70 million is much bigger than 2 but it's a lot smaller than infinity."

Zhang's breakthrough involved sieve methods, which are ways of filtering numbers in your proof. An elementary example is the sieve of Eratosthenes where you filter out non-prime numbers up to, say 100, by crossing out all the multiples of 2, then all the multiples of the next remaining number, 3, then the multiples of the next remaining number, 5, and so on. Sundaram's sieve also filters out the non-prime numbers, but is based on arithmetic progressions – sequences of numbers that are separated from their neighbours by a fixed difference. (An example of an arithmetic progression is 3, 7, 11, 15, 19... where there is a difference of 4 between neighbours in the sequence.) 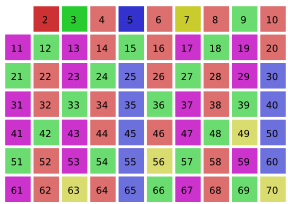 This is an illustration of the sieve of Eratosthenes, which is designed to catch prime numbers. Adapted from a figure by SKopp, CC BY-SA 3.0.

"Sieve methods are a mathematical tool for translating some information you understand about numbers to create some information you'd like to know," says Maynard. "[For example] if you understand certain technical questions about primes in arithmetic progressions, then you can translate that to information about small gaps between primes." Sieve methods might seem easy at first, but sometimes very strong mathematical results are needed to make them work. Zhang's breakthrough involved proving strong results about primes that could provide the input for the sieving method.

Maynard's approach was different: "Rather than improving the input to the method I changed the method itself. It became more efficient in turning one type of information into another and it meant that we needed much weaker inputs to get a result about boundary gaps between primes." With this new method he dramatically reduced the gap from 70 million to just 600. And after a flurry of collaborative work with a group of mathematicians, we now know there are infinitely many pairs of primes separated by a gap of just 246.

Number theory has a wealth of long-standing conjectures and open problems. A proof of the twin prime conjecture might still be a way off, but Maynard recently proved another significant conjecture with his colleague Dimitris Koukoulopoulos.

– and irrational numbers that can't be written in this way. For example the famous number

, 3.14151... is irrational, so it can't be written down as a fraction. What we can do, however, is approximate it by a fraction. For example, when we only use the first two decimal places of

, 3.14, to approximate , then what we are doing is approximating it by the fraction

. But that approximation involves pretty big numbers, and actually the fraction

is a more accurate approximation of

Suppose you want to guarantee your approximations will have a certain accuracy, and this accuracy can vary with the denominator

used in your approximations,

. Then the Duffin-Schaeffer conjecture says there is an easy calculation that tells you you'll either have your specified type of efficient approximations for almost all the numbers, or for almost none of them.

"The Duffin-Schaeffer conjecture says either you only have a rare set of exceptions to this statement about efficient approximations, or it is basically never ever true," says Maynard. "And [the conjecture] gives you a very simple step to know whether you are ok or not."

This might not sound so useful at first, but it gives mathematicians a powerful tool. "There's lots of mathematical statements that you might wish were true for absolutely everything but it turns out there's a few annoying exceptions," says Maynard. "But provided those exceptions are suitably rare, the result tells us they don't actually matter."

Maynard's work is described in the citation for his prize as "highly ingenious, often leading to surprising breakthroughs on important problems that seemed to be inaccessible by current techniques." But despite his many successes, the Fields Medal still comes as a surprise. "You don't think of yourself as getting a huge mathematical honour when you're sitting at your desk playing around with mathematical bobbins!"

And while receiving one of the biggest prizes in mathematics is a huge honour, Maynard also finds it daunting, and slightly surreal. "In some ways it's intimidating thinking of my name on this list of legends of mathematics from the past. People I looked up to, when I was a kid and thinking about mathematicians," he says. " It's certainly quite surreal in that way."