Suppose you're on a plane with a very narrow aisle and only one toilet. If you need the loo, you could just get up and stand in a physical queue. But that means you can't keep watching your movie. And, more importantly, you'll also block the aisle and the drinks trolley won't be able to get through. To avert this crisis in the skies, we propose the LamportPlus Loo-Q system!

No one is thinking clearly on a long flight, and no one wants to get into complex negotiations for how queues should work, particularly when people are busting for the toilet. The solution we need is something that can do the following:

To solve this problem for us the passengers, and to do it as easily and cheaply as possible for the airlines, our Loo-Q program just needs to be added to the in-seat entertainment system. Then each seat will run its own queue and no central computer is necessary to coordinate things. Loo-Q is a distributed system: the entertainment system in each seat runs a separate process, communicating with the other processes (ie, seats) via messages. (You can read more about distributed systems in Distributed systems and ambiguous histories.)

For simplicity we need to make a couple of assumptions: 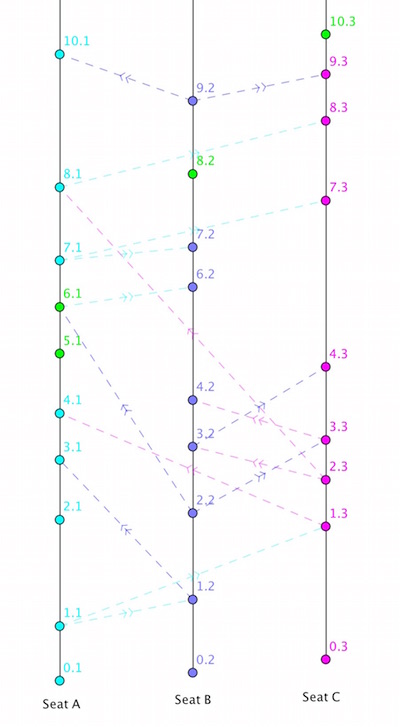 The spacetime diagram for an example of the Loo-Q system in action! You can see the example in full here.

The Loo-Q algorithm is based on the example in Leslie Lamport's paper Time, clocks, and the ordering of events in a distributed system, that is one of the most cited papers in computer science. The Loo-Q system works by every seat maintaining its own local queue,

. The local queues work according to the rules listed below. The actions of each rule form a single simultaneous event, and we use Leslie Lamport's logical clocks to make sure we don't violate causality.

Rule 1: If you need the loo you press your Loo-Q button. Your seat,

, increases the time on its local clock

by 1, and sends the timestamped message "

" to all the other seats. Your seat also adds this message to its own local queue:

, which is ordered by the timestamps on the messages, the earliest coming first in the queue.

, it must obey Lamport's rules for logical clocks. Your seat must increase the time on its local clock

by at least 1, so that it is greater than the timestamp on the message:

. Your seat adds the message from the seat

to your seat's own local queue,

(respecting the order of the timestamps). And it sends a timestamped message back to

Rule 3: Your Loo-Q button, for seat

, will go green when it's your turn to go to the loo. This happens if:

increases by 1, and you are free to go to the loo!

Rule 4: When you've finished with the loo and returned to your seat, your seat increases its local clock

by 1 and turns your Loo-Q button off. Your seat removes your request "

" from your local queue

" message to all other seats.

" message, it increases its local clock,

" message from its local queue,

. (So it's no use trying to rig the system by queueing up future visits to the loo by repeatedly pressing your Loo-Q button, they're all deleted when you've finished your first visit.)

", it again increases its local clock,

You can see a worked example, showing the Loo-Q system in action for three of the seats on a plane, here.

You might ask: Why go through all this palaver? It will be well worth it if it meets the specifications we set for our Loo-Q system:

Does the Loo-Q system satisfy these?

No queue forms in the aisle: You only get up for the loo if your Loo-Q button goes green. Rule 3 says this only happens if:

But if your request is at front of your queue a message from another seat could only be one of: Lamport explained in his paper that it is this second part of rule 3, together with the assumption that messages are received between seats in the order that they were sent, that is key to the whole system working: "[This] guarantees that [your seat] has learned about all the requests which preceded its current request."

So your button only goes green once everyone requesting the loo earlier than you has been to the loo (Rule 3) and has returned to their seat and sent their finished messages (Rules 4 and 5). No queue forms in the aisle.

The Loo-Q system is fair, requests for the toilet are granted in the order in which they are made: Again, the second part of Rule 3 guarantees this.

Everyone who has requested the loo will eventually get to go (up to the point the plane begins its descent for landing): Everyone who goes to the loo has to return to their seat (so the drinks trolley can get through), so their Loo-Q button will eventually turn off, their finished messages will be sent and their request will be removed from all the local queues. So, given enough time, each request will eventually reach the front of their queue and pass Rule 3.

No need to talk to anyone – you get to stay in your seat watching your movie for as long as possible: This final specification is satisfied thanks to the wonder of the distributed nature of this algorithm. Hooray for distributed algorithms and hooray for Leslie Lamport and his logical clocks!

You can see a worked example, showing the Loo-Q system in action for three of the seats on a plane, here.