Maths in a minute: Asymptotic expansions

If you're familiar with some calculus, then you might know that certain types of functions can be approximated using convergent series. (If that's news to you, then you might first want to read this short article and familiarise yourself with the idea.)

It turns out that some functions can also be approximated using series that don't converge at all. This seems weird at first: a divergent series (one that doesn't converge) can't be considered to be "equal to" a single finite value (as a convergent series can be) so how can you possibly use it to approximate anything? Here's an answer to this question, which was first formalised by the French mathematician Henri Poincaré in 1886.

To illustrate the idea behind so-called asymptotic expansions, let's first imagine that we have some function

. We would like to describe the behaviour of the function as

goes to infinity — in other words, we would like to describe the asymptotic behaviour of the function.

Now imagine that you also have an infinite series (i.e. infinite sum) of the form

, etc are fixed coefficients. We are not making any assumptions on whether or not

converges for given values of

a positive integer) behave as

goes to infinity. For each

goes to infinity — and it drops down to

faster than the preceding function

Now given some positive integer

we can chop the sum

term and consider the partial sum

, we can then look at the difference

between the value of the function at

and the partial sum evaluated at

This difference is also called the remainder.

Now if we were hoping that our series converges, we’d look at what happens to the remainder (for some fixed value of

tends to infinity, hoping that it tends to

. But since we’re not banking on convergence we won’t do that. Instead we will keep

fixed and look at what happens as

Here comes the definition. We say that

is an asymptotic expansion of

if there exists a real number

so that for all values of

that are sufficiently large we have

Since the right hand side of this inequality tends to

tends to infinity, the inequality tells us that the remainder

tends to infinity. So even though our series may diverge, the partial sum

still gives you a good approximation of

. If you choose a different value for

has to cross to count as "sufficiently large" may change too.

Another thing our expression above tells us is that

goes to infinity no slower than

drops to zero as

goes to infinity. In other words, the first term that we neglected when we formed our partial sum

(the term which involved

) tells us something about the behaviour of the remainder 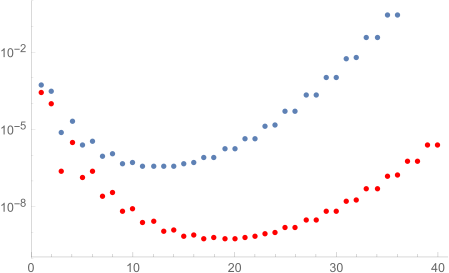 Asymptotic expansions can be really useful when approximating functions. Even when your function can also be approximated by a convergent series (see here) it may be that the convergence is very slow, so you'd have to consider a very long partial sum to get a good approximation. When that is the case, an asymptotic expansion may do a better job, as it may deliver you a good approximation with fewer terms. See Stokes phenomenon: An asymptotic adventure for a problem where this is the case.

to get an new function

tends to infinity. There's a more general definition of an asymptotic series, which works when you are trying to describe the behaviour of a function as

tends to some finite number

. It even works when

is a complex variable, rather than a real one. See Wikipedia to find out more.