Maths in a minute: The power of powers

Bored of solving quadratic equations? Can’t be bothered with cubics? Then it’s time to step into the infinite — and marvel at the fact that many of the functions you’ll have come across can be expressed using infinite sums made of powers of

A great example are the trigonometric functions sine and cosine. It turns out that they can be expressed as follows

For both of these series the beautiful pattern continues indefinitely. Choosing a particular value for

Similarly beautiful series can be used to express the exponential function

and the natural logarithm

though in the case of the logarithm this only works when

Other functions too can be expressed using a power series, also called a Taylor series, and this is a very useful thing: for example, you can approximate the value of any of the functions above at

simply by evaluating the first few terms of the power series.

For example, if your calculator doesn’t have a cosine button and you want to work out

, you can approximate it by: 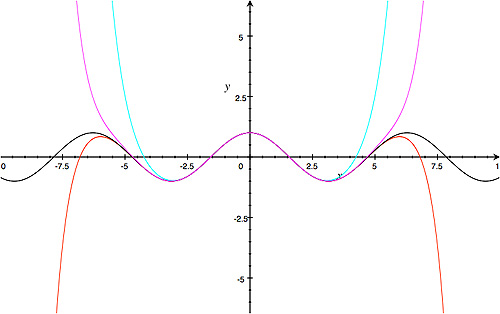 The black curve is the graph of

The cyan curve is the graph of

The purple curve is the graph of

And the red curve is the graph of

There was a mistake in the

There was a mistake in the formula, which we have now corrected. Apologies for confusing you!

Thanks to the two previous

Thanks to the two previous commenters for pointing out the mistake, we've corrected it.

Shouldn't the expression for sin(x) begin with x, instead of 1?

I was enlightened by this article, especially after being scared off trig functions at school. I was even more enlightened when I punched in cos (1) into my calculator, a Casio fx-85GT PLUS which does have a cosine button, and got 0.9998... instead of 0.54... After an hour's bafflement I realised I needed to shift the set-up to radians, whereas I'd never got beyond degrees at school. Great, something more I've learnt. Purely as a matter of curiosity though, is it possible to come up with a power series that does as neatly converge on a value in degrees?

I hope this helps! Tony S

Thanks Tony, but I'd already assumed there are so many degrees per radian. What intrigued me was the way that series expressed the cosine function without needing to incorporate any such conversion factor and what was special about radians as opposed to degrees which enables this. In the same vein, I was wondering if there was any similarly elegant and simple series which could do the same for degrees.

Great insight, Please provide links for further reading and Original geniou/s who gave us this explanation.