Maths in a minute: Local connectivity

We know that there are shapes in the plane whose outline is incredibly crinkly. Examples are fractals, like the famous Mandelbrot set. But just how complex can a shape be?

— for illustration we’ll pick one that lies on its outline. Now draw a little disc

at its centre and look at the intersection of 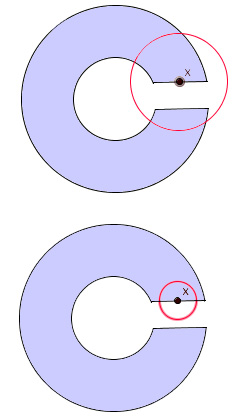 As you can see in the picture, it may happen that the intersection consists of more than one connected component. In our example this happens because the outline of

curves around and re-enters the disc

again at a place away from

However, that’s only because we chose

to be quite large. By making

smaller we can ensure that the intersection of

consists of only one connected component. A shape

(drawn in the plane) is locally connected at

if the intersection of a disc

consists of a single connected component for all discs whose radii are small enough.

is locally connected if for all points

there is an open connected neighbourhood

How can a shape not be locally connected? An example is the comb space. Think of the closed interval

(closed means it contains its endpoints). Now at every point of the form

is a natural number, erect a vertical spike of length 1. Also include such a spike at the left-most point of the interval

that is, at the point

So we have vertical spikes at

small enough to not contain any piece of the horizontal interval. Since there are infinitely many points of the form

on the horizontal interval, the disc

will contain a piece of each of these infinitely many separated vertical spikes. That’s true no matter how small

is, so the comb space is not locally connected at any point

on the left-most vertical spike. 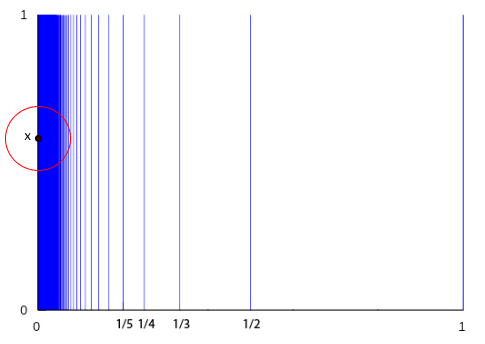 Very interesting read, especially considering I'm struggling with a somewhat related problem: contour offsetting (contour and not polygon because it can include arcs). Eliminating a section from between its neighbours as it shrinks away to nothing would be doable, but the problem is you never know when some other, non-local section of your contour starts interfering with the section you're trying to offset and each-with-each gets rather daunting, fast. For a poor code monkey like me it can all be a bit overwhelming... :)

Connectivity and Ratios of Rates of Change

The question can be stated as to which rate of change is the faster one. Is the rate of shrinkage of the contour or of the continuation loop (circle) the greatest.
If they are related, then the connectivity is zero because the RATE of shrinkage of the fractal (and of the comb too) depend inversely on the size of the previous change which is a logarithmic variation, whilst the rate of change of the continuation loop is a reciprocal one. Then connectivity is zero for both cases.
However if these two changes are arbitrary or unrelated, there is no answer.