Do we live in a matrix? 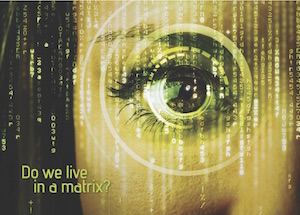 Have you ever wondered if we live in a computer simulation, as memorably depicted by the movie The Matrix? You are not alone.

Mathematics is incredibly good at describing the world we live in. So much so that some people have argued that maths is not just a tool for describing the world, but that the world is itself a mathematical structure. One of these is Max Tegmark, a physicist at MIT. He suggests that if the characters in a computer game attain consciousness one day, they probably won't believe that they are living in a world that's entirely described by the 0s and 1s of computer code. But something similar might go for us, too. You can find out more in the article Living in the matrix? and accompanying podcast It's all maths!

Others physicists wonder if reality and information are one and the same. Do things only exist if they are perceived? If a tree falls in the woods and no one is there to hear it, does it make a sound? What does physics tell us about reality? These are some of the greatest questions in physics and philosophy, still unanswered after decades, or even centuries, of debate. Some wonder if they can ever be answered, but one physicist was unafraid to try: John Archibald Wheeler.

Wheeler was a legendary figure in physics and categorised his long and productive career into three periods: "Everything is Particles", "Everything is Fields", and "Everything is Information". The driving idea behind the third period was spurred by his contemplation of the age-old question: "How come existence?" And his answer, first published in a brilliantly written (and very entertaining) paper in 1989, was it from bit:

We asked Anton Zeilinger, experimental quantum physicist and Director of the Institute for Quantum Optics and Quantum Information about the impact of Wheeler's radical idea – you can read his explanation in the article It from bit?

If we do need to rethink the nature of reality, the claim that the Universe is itself a mathematical structure is clearly a tempting one for anyone who loves maths. But does it stand up to scrutiny? We asked philosopher of physics Jeremy Butterfield for his opinion – you can find out what he had to say in Made of maths?

And whether or not we are in the middle of a mathematical simulation, it is still true that building mathematical models forms the core of many areas of scientific and engineering research. In Matrix: Simulating the world: Part I and Part II, Lewis Dartnell explains how simple computer models can create realistically complex behaviour, and presents a hands-on guide for creating your own simulations.