Living in the matrix?

Marianne Freiberger Share this page
You can listen to our interview with Tegmark in our podcast.

It's something that most of us dread: to find out one day that we aren't real, that we are living in a computer simulation. Yet some people who work at the forefront of science believe that the ultimate nature of reality might not be so far off this idea. They aren't suggesting that some intelligent being has programmed a simulation to create a world that dances to its tune, but that the Universe could be described, in the same way as a computer simulation, using only numbers and mathematics.

Max Tegmark, a physicist at MIT, is one of those people. In his new book Our mathematical Universe Tegmark suggests that the Universe itself is a mathematical structure. When we met him in London last week, he explained: "Suppose you are a character in Minecraft or some much more advanced computer game where the graphics are really good and you don't think you're in a game. You feel that you can bump into real objects and you can fall in love and get excited about stuff. And when you start studying the physical world in this video game, eventually you start discovering that, wow, everything is made out of pixels, and all these things that I used to think were 'stuff' are actually just described by a bunch of numbers. You'd undoubtedly be criticised by some friends saying, 'come on you're stupid, it's stuff after all.' But [someone] looking from outside of this video game would see that actually, all there was was numbers." "And we're exactly in this situation in our world. We look around and it doesn't seem that mathematical at all, but everything we see is made out of elementary particles like quarks and electrons. And what properties does an electron have? Does it have a smell or a colour or a texture? No! As far as we can tell the only properties an electron has are -1, 1/2 and 1. We physicists have come up with geeky names for these properties, like electric charge, or spin, or lepton number, but the electron doesn't care what we call it, the properties are just numbers."

Even the space that those elementary particles live and move around in, so Tegmark suggests, is ultimately described by numbers and mathematical concepts. A number describes how many dimensions space has. As Einstein's theory of relativity tells us, space is curved and that curvature is described mathematically. We don't know whether the Universe is finite or infinite, and neither do we know its exact shape, but again it's mathematics that describes all possible shapes. Space, then, is just as mathematical as the particles that make up the "stuff" within it.

From this realisation Tegmark makes his daring leap: not only is the world described very accurately by mathematics, he suggests, it can be described only in terms of mathematics. It's a mathematical structure just like a cube, or a tetrahedron. Or, to go back to our example, it's entirely described by numbers and maths, just as a video game is encoded is a computer.

One obvious objection to raise against this idea is that there might be some sort of selection bias going on. Perhaps our minds just happen to be ideally suited to mathematical thought, so it's not surprising that we describe the world in terms of maths and that we can only really grasp those of its features that can be described mathematically. Perhaps there's lots more out there that is inherently unmathematical, but we just can't grasp it. 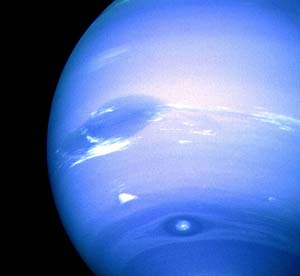 The planet Neptune was discovered after an unexpected wobble was observed in the orbit of Uranus. Calculations showed that this matched the wobble induced by the gravitational pull of an unseen planet. Image courtesy NASA.

But Tegmark points to the extraordinary success of mathematics. "We have again and again discovered that there was more stuff to learn than we knew of," he says. "So I think that's very likely to happen again. But again and again we have found that what we discovered could be described by mathematics and I think that is too profound a fact to just brush aside as meaningless. We discovered the planet Neptune with maths, we discovered the radio wave with maths, Peter Higgs predicted the Higgs boson with maths ... we can now calculate every single physical constant ever measured from just a list of 32 numbers. I think that is telling us something quite fundamental."

"If this idea that it's all maths is incorrect, then physics is ultimately doomed because we will hit this roadblock when there will be no more mathematical clues in nature for us to find. But if I'm correct in this guess then that's very good news for physics because there is no roadblock and our ultimate ability to figure things out is only going to be limited by our ability to do experiments and by our imagination and creativity."

And it's not just physics. Over the last few decades maths has made major inroads into all other sciences too, from biology and medicine to psychology and economics. Even one of the greatest remaining mysteries, the human mind and consciousness, is being attacked by neuroscientists using mathematical tools. If all of these areas can be understood mathematically, then we can be confident that we will eventually crack the riddles they pose.

Intrigued or still unconvinced? Then listen to our interview with Tegmark in our podcast, or read Our mathematical Universe (published by Allen Lane). We'll publish a review of the book on Plus soon.

It's not only that we're suited to think mathematically; other animals--some that we wouldn't label complex--are also capable of thinking mathematically (i.e. ants and vectors). It's not only that we think in this manner, but it's so inherent in our makeup, that we do it somewhat unconsciously. When you add that non-human animals think this way, the conclusion seems inescapable.

I really like Max Tegmark because he bravely thinks about strange, but stll plausible things. He makes me think deeply and has so for many years.

But i have one BIG (to me) question. What exactly does it mean to say reality is a mathematical "structure"? I can't think of what such an implementation would actually be???

Is that a philosophical thing? Or a "spiritual" thing (in the hippie/zen sort of way)? Or a computer virtual instrumentality? Or elementary particles and so-called natural laws? I lean to the latter as the only one that strikes me as plausible. But I'm not the inventor of this idea, so, ask them.

As far as the "we're a computer simulation" argument I basically don't care a wit. As long as it seems real and plausible to me and it somehow allows "free will" (I don't know what that is either but DO care). I'm a cheer leader for DeCarte. I don't think his most oft repeated "cognito ergo sum" has ever been effectively
refuted. And as long as I can think (freely) I'm a happy camper.

These properties are measures (-1, 0, 1). To the unenlightened, measurement would seem to require something to measure.

Ok interesting stuff but believe the logic is too simple and faulty. For example..words are also very effective at describing the world we live in today. This doesn't mean however that the world is made up of words. The tools used to describe something are by definition not the thing they describe. So at best what the article should have said is that the world (or rather much more accurately OUR perception of the world) seems to operate in some form of logic that follows mathematical principles and has in that sense some rational to it. One different view is that it is WE who are imposing the 1/0 interpretation on the world thereby forcing the collapse of the 'potential for everything' into one possibility be it an object or item from the electron to the moon. This in a similar fashion to the collapse of the wave function of probability into a single location upon measurement. Have a nice day!

Math is just a language

Math is just a language, perhaps more precise than words, but limiting like words. I have no doubt that there are dimensions that we haven't discovered yet and when someone like Einstein figures out that it is easier to think of the world and the Math is easier with a new paradigm, we will get descriptions in both words and Math. I have observed too many "coincidences" to not believe there is another connecting dimension. It is like we are living in Flatland, except we see three dimensions instead of two and describe time as a fourth instead of a third. The problem with the way we think is that we filter our experiences through what we have already experienced, when something doesn't fit, we often don't see it. The first job is to admit to yourself there are things beyond your experience and train yourself to see them even if they seem strange.