A new particle for Christmas?

Remember the huge excitement surrounding the discovery of the Higgs boson back in 2012? At the time scientists at the Large Hadron Collider (LHC) in CERN didn't catch sight of the fabled particle itself, rather they inferred its existence from a bump in the statistical data their experiments produced. Now a similar bump is again causing some excitement. While the Higgs boson had already been predicted back in the 1960s, nobody knows exactly what kind of particle hides behind the current bump. If it's real, and not just a statistical fluke, then it marks the discovery of genuinely new physics. 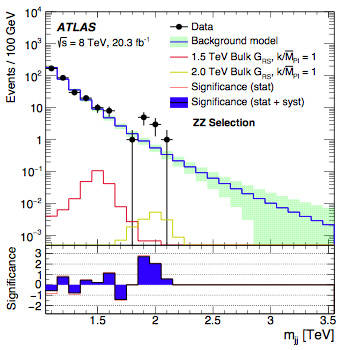 Data from the particle collisions. The horizontal axis measures energy and the vertical axis measures how many pairs of Z bosons with this energy were produced. The blue step function represents the predictions of the standard model and the black dots represent observed data. There is a clear bump at 2 TeV. There are similar pictures for ZW pairs and WW pairs. (Image from this paper by the ATLAS collaboration at CERN, reproduced under a creative commons licence.)

The LHC is particle accelerator. In its large ring-shaped tunnel, it speeds particles called protons up to near the speed of light and gets them to collide. As the protons smash together at these very high energies, other particles emerge. Most of them decay within the blink of an eye: that's exactly what happens with the Higgs boson. But luckily their existence can be gleaned from the particles they decay into. These spray out in jets from the collisions and have their energy, momentum and direction measured by sophisticated detectors. (See Particle hunting at the LHC for more information.)

The new data bump, announced this summer, comes from experiments that sift the collisions for signs of particular types of particles connected to the electroweak force, which is responsible for radioactive decay. Physicists know the force is carried across space by messenger particles called bosons. There are two types of these: Z bosons and W bosons. Like all fundamental particles, the bosons and their behaviour are described by a theory called the standard model of particle physics (see this article for more). It tells physicists what patterns of Z and W bosons should be produced in the collisions and what their energies should be. If the actual observations agree with these predictions, then that's reassuring confirmation that the standard model is correct. If it doesn't, then it's a tantalising hint towards undiscovered particles the model doesn't yet include.

The new bump marks such a deviation from the standard model. "There are too many collisions coming out with two electroweak bosons: two W bosons, two Z bosons, or a Z and a W boson," explains Ben Allanach, an expert in theoretical particle physics at the University of Cambridge. The excess occurs for boson pairs that have an energy of 2 tera electron volts (TeV). Physicists know it might be the result of a heavier particle, weighing in at 2000 times the mass of a proton, being produced in the collisions and then quickly decaying into those extra boson pairs. But the identity of this heavy particle is a mystery. "Nobody knows of any particles that have that mass. All [the particles that we know exist] are much lighter. The heaviest we know about is the top quark, at only around 170 times the mass of the proton. If this [result] stands up to further scrutiny, then it's the discovery of a completely new particle. In my opinion, it's the most interesting excess that comes from the first run of the LHC."

A new particle is a very exciting prospect, but for the moment physicists are holding back on the champagne. The bump may, after all, turn out to be a statistical blip, caused by random fluctuations in the particles' behaviour. Scientists measure their confidence that a result is real using sigma levels (explained in this article). To count as a discovery, a data set must come with a sigma level of at least 5. The bump has occurred in three different ways of sieving the data, which look for WW pairs, ZZ pairs and ZW pairs respectively, and it comes with a sigma level of 2 to 3 in each. "That's not that high, but the fact that it's in three different channels and compatible between them makes it exciting," says Allanach. Everything now depends on the data from the LHC's second run. "The LHC has been running at higher energy until earlier this month. It's collected about a fifth of the data it collected in the first run, but because the energy is higher, its sensitivity is much higher. If you work it all out, they should be able to see in the new data the same size of bump they saw in the old data."

If that's the case, and is the case for certain, then there's likely to be an announcement just in time for Christmas, in a seminar scheduled at CERN for the 15th of December. Particle physicists around the world will be sitting tight on that day, but even if there's no report on the excess, Allanach won't be giving up hope. "If that happens I'll be suspicious. It would probably mean that there still is a bump, but the experiments want to do more checks before causing even more excitement. Already the literature has gone mental over this." 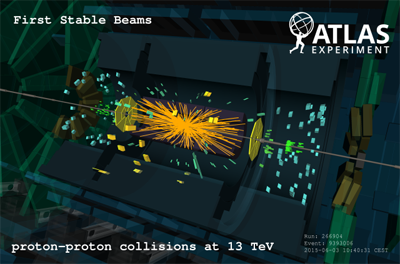 Display of proton-proton collisions recorded by the ATLAS experiment at the LHC on 3 June 2015, with the first LHC stable beams at a collision energy of 13 TeV. Image: ATLAS collaboration.

Mental is the right the word. Since the announcement of the bump in the summer over 40 theoretical papers have been published, with more coming out every day, all attempting to explain the excess of Z and W pairs at the 2 TeV energy value. The various authors base their explanations on what is known from the standard model and hypothetical theories that go beyond.

Allanach's own two papers on the subject are a case in point. One of them identifies the mysterious new particle as another boson similar to the Z and the W, but coming in three different states: a zero charge, a positive charge and a negative charge state. "The symmetries within the mathematical theory tell you that the three states are all at 2000 times the mass of the proton, and you can calculate that they should decay into the Zs and the Ws measured in experiments."

Allanach's second proposal relies on a theory that was first developed to explain an embarrassing problem to do with the Higgs boson: that its observed mass is around a billion billion times less than the standard theory says it should be. If you assume that the equations underlying the standard model exhibit an elegant type of symmetry, called supersymmetry, then the problem goes away, but leaves you with a curious prediction: all particles should come with heavier supersymmetric partner particles. None of these partner particles have to date been observed so supersymmetry remains a mere hypothesis — albeit a beautiful one that has since found other uses in the theory of particle physics (see The LHC and the dark matter mystery to find out more).

It won't be too long until experiments test those ideas again, and the many others that have been put forward. In the mean time, particle physicists are likely to keep coming up with more explanations for the Z and W excess. If the bump turns out to be real, and one of the explanations is correct, then its authors can hope for a future Nobel Prize.