Happy birthday Plus: celebrating 10 years of bringing mathematics to life 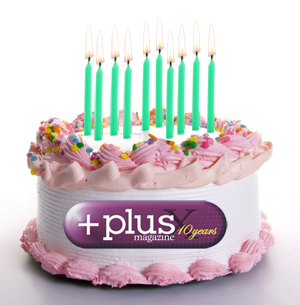 As all soon-to-be-10-year-olds do, Plus had been looking forward to our tenth birthday and we were very excited to start celebrating in January. The celebrations continue in this issue with an article from the founding Plus team — Robert Harding, Steve Lay and Maura Bourdon. How time does PASS tells us how it all began, and reflects on how Plus has changed over the years.

We, the current editors of Plus were still busy with ours maths degrees in those early days. (And if Plus with its huge archive of articles had been around then, we could surely have saved ourselves many headaches pouring over incomprehensible lecture notes.) We'd like to thank the founding editors of Plus, as well as our sponsors, for their vision and foresight in recognising the importance of popularising maths, which we are just at passionate about today.

Equally importantly, we'd like to thank our readers for keeping Plus going over the last decade. We're doing our best to carry on the brilliant work started 10 years ago. But if you have any suggestions or comments on how we could improve Plus, then now is the time to tell us.

Plus 10: — what were the greatest mathematical advances in the last decade?

Plus isn't the only thing that has changed over the last 10 years. The mathematical landscape has also undergone dramatic changes. Century-old problems have been solved, or at least come close to a solution, and their solutions have opened up worlds of new mathematics. We have been asking people to nominate what they think are the most important mathematical advances of the last decade and below are some of our favourites. What do you think? Have we missed something out? If you think we have, then we would love to hear from you.

Grigori Perelman's proof of the Poincaré conjecture made headline news in 2006, but sadly not necessarily for the right reasons. While reporters made some attempts to explain the theory and its importance in mathematics, most were more interested in the scandal arising from Perelman's refusal to accept the Fields Medal for his work and his "disappearance" from the mathematical scene.

The mathematical significance of Perelman's work did warrant genuine excitement, as he not only solved a conjecture that had been haunting mathematicians for 100 years, but in fact seems to have solved an even more ambitious result: the Geometrisation conjecture of which Poincaré's conjecture is a consequence.

For over a century, topologists had known what all the possible two-dimensional surfaces look like, but had not been able to come to a similar understanding of three-dimensional manifolds (the 3D analogy of 2D surfaces). The Geometrisation conjecture, proposed in 1970 by William Thurston, finally characterised all three-dimensional manifolds as being made up of certain well-understood pieces glued together in specified ways. Thurston won (and accepted!) a Fields Medal for his research, but Perelman has been the first person to show that both these conjectures are in fact true. 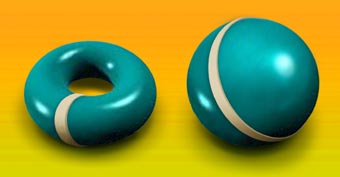 A doughnut is not the same as a ball — a rubber band can simply be slid off the surface of a ball, while you would need to cut the rubber band to remove it from the doughnut. And this property of the two-dimensional surface of a sphere continues to hold no matter how it is deformed (without cutting or tearing). Poincar� conjectured that an analogous result is true for the three-dimensional surfaces.

Despite the scandal that has surrounded the proof, including the unusual behaviour of Perelman, the mathematical community now seem to be ready to accept Perelman's proof and celebrate an exciting mathematical achievement. (You can read more about the Poincaré conjecture and Perelman's work on Plus.)

For centuries, mathematicians have tried to find patterns in the way the primes are distributed amongst the other whole numbers. A famous open question in this area was the following: can you find a sequence of prime numbers that is as long as you like and in which the difference between each prime and its successor in the sequence is always the same number d (such a sequence is called an arithmetic progression)? Mathematicians had long conjectured that the answer is "yes", but it was not until Tao and Green arrived on the scene that this intuition was proved to be correct.

The prime numbers are the fundamental building blocks of mathematics, likened to the role of atoms in chemistry and physics. And an advance as significant as Green and Tao's result in 2003 is a major step in our quest to understand the underpinnings of mathematics. This result was an important part of Tao's work that resulted in him receiving the Fields Medal in 2006. However, while their work proves that arithmetic progressions of prime numbers of any length do exist, it does not offer any information on how to construct these. The longest such sequence found to date consists of 24 primes beginning at 468,395,662,504,823 with a difference of 205,619 x 223,092,870 between each (see the Primes in Arithmetic Progression Records for more information).

You can read Green and Tao's paper online.

For most of us the web search engine Google has become such an indispensable tool that we don't just search for something any more, we "google" it. Google's rise to become one of the most successful search engines on the web today is due to the mathematical algorithm PageRank, devised by Sergey Brin and Lawrence Page, the founders of Google. This algorithm not only decides which webpages match your search criteria (which all search engines do), but also which are more important and returns these at the top of the results.

PageRank decides how important a page is by staging a popularity contest with each page on the web voting for all the other pages it links to. The algorithm constructs a huge matrix with a column representing each web page. The entries of the column corresponding to a page P indicate which other pages P links to. The page P passes on a proportion of its own importance to those pages it links to, and its own importance is calculated by adding up all the contributions made by the other pages linking to it. This all sounds pretty circular, but in fact calculating this importance vector is relatively straight-forward using linear algebra techniques, despite the fact that the matrix involved has over 25 billion rows and columns.

This application highlights the relevance of maths in our daily lives and shows the vital role it has to play in industries, especially the information sector. But it must also be the most lucrative piece of maths in history, as this mathematical advance is directly responsible for much of Google's success and so the company's $3 billion dollars profit in 2006.

You can read more of the details of how PageRank works in How Google finds your needle in the web's haystack, The $25,000,000,000 eigenvector: The linear algebra behind Google and in Brin and Page's (the founders of Google) paper The anatomy of a large-scale hypertextual Web search engine.

This discovery sits on the boundary between maths and physics: it provides the maths, in particular the geometry, necessary to understand what physicists call critical phenomena. These phenomena occur when a physical system suddenly changes its state, for example when a pot of water starts boiling or when iron spontaneously magnetises. Physicists call such a change a phase transition. When a system comes to a phase transition, it can exhibit very complicated statistical properties which to this day are not well-understood, and these properties are called critical phenomena.

In the 1980s and 1990s, physicists developed what is called conformal field theory, which goes some way in describing critical phenomena. But the theory was not mathematically rigorous and gave no clear geometrical picture of what is happening. Gregory Lawler, Oded Schramm and Wendelin Werner have since developed Schramm-Loewner evolutions, a way of defining random paths in two dimensions, that has the potential to explain two-dimensional phase transitions and conformal field theory. This new approach provides the mathematical rigour that the theory was lacking, and provides a direct geometric picture of systems at or near their critical points.

In recognition of his work, including his contribution to the development of Schramm-Loewner evolution, Werner was awarded a Fields Medal in 2006. (You can read more about Werner's work at the 2006 International Congress of Mathematicians.) 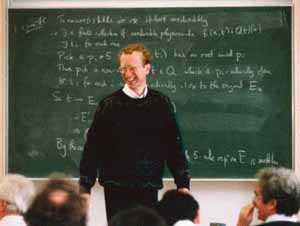 While strictly outside of the last decade, we thought it was important to mention Andrew Wiles's momentous proof of Fermat's last theorem, finally accepted as correct in 1995.

The theorem had been a thorn in mathematician's sides for centuries. So simple to state — that an+bn=cn did not have whole number solutions for any value of n greater than 2 — the proof had eluded even the greatest minds. (You can read more about Fermat's last theorem on MacTutor and Plus.)

Wiles's proof was enormous, over 100 pages long, and was the result of years of hard and lonely work. Only a handful of mathematicians can truly say they understand his proof, but these people took extreme care in checking each and every line, and the mathematical community is now happy to accept it. Wiles's success followed many attempts to prove Fermat's last theorem in the past. And although those before him weren't successful, all of their efforts have generated a huge amount of new mathematics. The final conquering of a 400 year-old theorem captured the public's imagination and generated a huge amount of media interest in the subject too.

Here's another simple question: when you're stacking up canon balls on board a ship, which arrangement of balls will take up the least space? The question was first asked in the late 16th century by Thomas Harriot, mathematical assistant to Sir Walter Raleigh. The answer, once you start playing around with canon balls, or — more realistically — oranges, is equally simple. Arrange the first layer of balls in a hexagonal pattern, then place the balls of the next layer into the dips of the previous one, etc, etc, until you arrive at the arrangement typically seen at green grocers' shops.

Johannes Kepler came to exactly this conclusion in 1611. He formulated the conjecture that this hexagonal close packing, together with a similarly regular arrangement called the cubic close packing, gives you the greatest density of balls. (You can read more about Kepler's conjecture in this Mathematical Mystery.)

Kepler didn't have a proof for his conjecture, and neither did anyone else until nearly 400 years later, when in 1998 Thomas Hales announced that he and his co-workers had finally found one. It wasn't an ordinary proof though: alongside the 250 pages of conventional mathematical argument, it contained 3 gigabytes of computer code and data. Twelve independent experts spent four years checking Hales's work on behalf of the maths journal Annals of mathematics, but, to mathematicians at least, their verdict was unsatisfactory: they were only 99% certain of the proof's validity because they had been unable to verify the huge volume of computer calculations.

Annals finally decided to publish the theoretical part of the proof in 2005, but mathematicians are left with a huge philosophical conundrum: can you trust a machine to do maths? This question still hasn't been answered and with computers becoming ever more powerful it is likely to become even more pressing. While mathematicians and computer scientists are busy developing fail-safe proof-checking mechanisms, Hales has started a program to produce a more acceptable version of his proof. With some luck, we may be able to report on it in Plus's 20th birthday issue. (Read more about computer proofs in Welcome to the maths lab.)

Thank you to Julian Havil, Ian Stewart, Chris Budd and Geoffrey Grimmett for their suggestions and comments.