In The Neverending Story (a film and novel by the same name) a little boy named Bastian discovers that there's something extraordinary about the book he's smuggled into his backpack: it changes as he reads it. The act of reading "The Neverending Story" Bastian finds, is simultaneously the act of writing it. 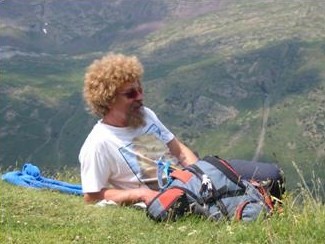 Could our universe be in a similar loop?

Wojciech Zurek, a theoretical physicist at Los Alamos National Laboratory, believes that this question could bring us closer to understanding one of the deepest mysteries in physics: How our perceived reality emerges from the weird world of quantum mechanics.

"Quantum mechanical states are fuzzy and fragile," says Zurek. In quantum mechanics, the principle of quantum superposition guarantees that any combination of quantum states is itself an allowed quantum state. "A system that can be here or there should be legally able to be both here and there," explains Zurek. Yet the universe appears to us to be specific and solid. We don't experience such "nonlocal" superpositions in everyday life: somehow, superpositions shake out to just one definite state. But how?

Zurek hopes that the answer may lie at the intersection of three well-developed ideas in quantum theory. The first is decoherence, a theory Zurek has been instrumental in advancing since 1981. Decoherence describes what happens when a system in superposition interacts with its environment: it becomes entangled with particles in the outside world that record its location, causing the superposition to fall apart (decohere) into a probabilistic mixture of definite states at specific locations. Only systems in perfect isolation can remain in superposition. A single errant photon can destroy the superposition, like the faintest breeze knocking down a house of cards.

Decoherence explains how familiar, classical physics emerges from the haze of quantum mechanics, and clears up vexing paradoxes like that of Schrödinger’s famous cat, locked in a box with a poisonous substance that will be released if a radioactive atom decays. While the box is closed, the usual story goes, the radioactive atom is in a superposition state in which it has both decayed and not decayed, leaving the trapped cat in limbo too. Decoherence helps resolve this, however:we don't need to worry about the cat being alive and dead at once because a macroscopic feline can't maintain the perfect isolation required to hold the superposition.

But decoherence does not explain why all observers share the same classical reality – that is, why reality is objective rather than subjective. For that, Zurek turns to the second piece of the puzzle, the theory of quantum Darwinism, which Zurek and his colleagues and collaborators have been developing over the past dozen years. Quantum Darwinism specifies how the environment selects and disseminates information about favored states. These favoured states emerge through a process dubbed "einselection" or environment induced superselection, and are recorded and copied by the environment during decoherence. "This proliferation of 'copies' of the states allows many observers to find out independently about the system, without disturbing it by measurements – hence, without getting in each others' way," explains Zurek. "This consensus defines 'objectivity' of the classical everyday reality." (See The Evolution of Reality.)

The third implement in Zurek's quantum toolbox is the quantum origin of probabilities that he traces to quantum entanglement. "Probability is a way of quantifying your partial knowledge" about a system, says Zurek. Drawing a random card from a face-down deck, you know that the probability of picking a spade is exactly one in four. Drawing from a deck placed face-up, the odds change: either it's a spade, or it isn't, and the probability is either zero or one. Probability, then, was thought to be tied to how much you know about a system. "The less you know," says Zurek, "the more probabilistic are your predictions."

This is where classical and quantum probabilities differ. In the classical world, the only way to know the state of all the cards is to know the individual state of each card. But in quantum physics, it is possible to have complete knowledge of the state of the deck as a whole, but no information at all about the individual cards, a phenomenon famously dubbed quantum entanglement. In quantum physics, probability emerges from the impossibility of knowing at once the whole entangled state and the state of its parts. Probabilities, Zurek explains, can be traced to quantum indeterminacy.

Armed with an FQXi grant of over $80,000, Zurek is now searching for a common framework for these three different perspectives of the quantum world, a process that he says "allows for cross-fertilization" that can provoke new veins of inquiry. But what common language may unite the three?

The answer could lie in quantum information theory, a growing movement in theoretical physics that argues for the critical role of information in understanding our universe. Information plays a unique role in quantum physics. By gathering information about a system, we change that system; information shapes existence. This phenomenon has no parallel in classical physics – except, perhaps, the mythical world of "The Neverending Story."

Using the language of philosophy, theorists distinguish between the ontic state, the "reality" which exists independently of what one knows about it, and the epistemic state, which consists of observer's subjective information about a system. "In the classical world, the ontic state of the system is just out there, independent of what is known about it. But in the quantum universe we inhabit, gathering information alters what is. The neat separation of epistemic and ontic we are used to is not respected by the quantum goings-on,"says Zurek.

If an experimenter chooses to measure wavelike properties of a photon, for instance, that photon will act like a wave. If she elects instead to measure its particle-like attributes – for example, by pinpointing its location – then a particle it shall be. If she locates its position precisely, Heisenberg's uncertainty principle mandates that its momentum will then be unknowable. The nature of the measurement will help determine the state the system takes on. In Zurek's words, "When the observer or even the environment acquires information, this epistemic act has implications for what exists – it has ontic consequences – as it alters the state of the system and constrains its future evolution."

Niels Bohr, one of the fathers of quantum theory, argued that quantum states are purely epistemic: they tell us the probability of any particular result, but do not determine what actually exists. "The price paid for this was a fundamental dichotomy of physics," says Zurek. "Bohr had to postulate a classical realm of the universe that existed independently of the quantum substrate. Physicists are always in the quest for a single theory of the universe, so such a dichotomy is a challenge," says Zurek. Quantum theory is more fundamental, so, Zurek believes, it should be able to account for both the epistemic and ontic aspects of our universe.

Zurek, like his advisor, the renowned theorist John Wheeler, believes that epistemic and ontic aspects of our universe and intimately linked. To describe this situation, in which epistemic and ontic are in a constant dialogue mediated by the observer, Zurek coined the term epiontic. Wheeler once illustrated the role of observers with a simple cartoon: a letter U, representing the universe from the Big Bang (the tip of the U’s right arm) to the present (the tip of the left arm), with a human eye perched on top of the left arm, gazing back in time. We bring the universe into being by looking at it, the cartoon seems to say.

By investigating the epiontic nature of quantum physics, says Zurek, we may hope "ultimately to understand how we, as observers, fit into this universe" and how our classical universe, "where epistemic and ontic are in a strict church and state-like separation, emerges from the quantum goings on, where these two functions are inseparably intertwined."

If this sounds like an ambitious goal, Zurek attacks it with a humble, and even playful, technique. "I try to write down things as I understand them at the moment," says Zurek. "That reveals what I don’t know; these holes in what I understand help define questions that can lead to insights."

"It's always fun to work with Wojciech," says Raymond Laflamme, the co-founder and director of the Institute for Quantum Computing at the University of Waterloo, who worked with Zurek as a postdoc and served as a member of his research group until 2001. Searching for the right word to describe Zurek, Laflamme turns to his native French: Zurek, he says, is a true bon vivant, a man who embraces life and learning with passionate curiosity.

"He has an incredible amount of intuition. With Wojciech, you do science everywhere," says Laflamme, fondly recalling ideas generated and shared on the ski lift or while out on a hike. As MIT physicist Seth Lloyd puts it, working with Zurek "involves not only thinking outside the box, but being outside the box."

"He's a playful intellect, with an intellectual twinkle in his eye," says Lloyd.

"There are some physicists who are good calculating machines," continues Laflamme. "Their skill is not making mistakes. This is not Wojciech!" he laughs. Instead, says Laflamme, Zurek "sees things from a different point of view. He takes on problems that are not new, but with a new way of thinking."

As Zurek puts it: "The hardest problem is asking a good question. I had the good fortune to ask a few good ones in the past – like about the role of the environment in the emergence of the classical from the quantum substrate in our universe. I think I'm getting closer to asking the right question now. But you only know you have a good question when you have an answer."