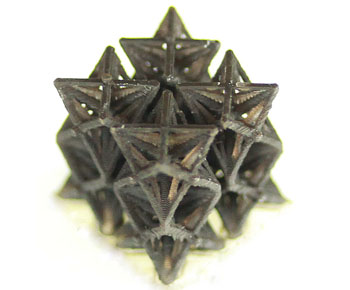 Clever geometry can do wonderful things. A team of engineers has produced a material that shrinks when it's heated. This is in contrast to most other materials that expand in the heat, and will be useful in all sorts of contexts where it's important that materials don't get bigger when hot: from making computer chips to producing high precision optical and mechanical devices, and even the fillings in your teeth. And it's all down to the clever geometry of the material's structure.

The structure is based on tiny components of interlocking beams with empty space between them. The beams are made from two different materials — a polymer substance and a copper-containing one — that react differently to heat. Both expand when heated, but the internal beams expand faster, and are arranged so that they pull the surface beams inward as they do so. As a result, the structure occupies less space: it shrinks. The idea goes back quite a few years, but it's only now, with the team's pioneering 3D printing technique that these delicate structures can actually be produced.

The team, led by Nicholas X. Fang of the Massachusetts Institute of Technology, tested their structures in the lab, but they also came up with a mathematical formula and a computational model to describe the geometry of the structures and their response to heat. The amount of shrinkage can be tuned by varying the amount of copper contained in one of the composite materials and by changing the geometrical arrangement of the beams. And although the structures are only about as big as sugar cubes, they can be fitted together like tiles to make up bigger ones that retain the shrinking property.

It takes a pretty high temperature to achieve the shrinkage — around 280 degrees Celsius — and the amount by which the structures shrink is tiny. But that's ok: engineers typically aren't after materials that shrink, but materials that don't expand in the heat, so these ones look like they'll fit the bill.