The Sun, the Moon and trigonometry

If you are Aristarchus of Samos, who lived around 2300 years ago, then you'll rely on your excellent geometrical expertise combined with an important insight: that the Moon shines at night because it is illuminated by the Sun. On the face of it, this latter fact is far from obvious, but then Aristarchus was a pioneer. Unlike many, many astronomers who came after him, he recognised that the Earth moved around the Sun, rather than the other way around.

Armed with the knowledge that the Sun illuminates the Moon, Aristarchus realised that at half Moon, the triangle formed by the Earth (E), the Moon (M) and the Sun (S) has a right angle at M. 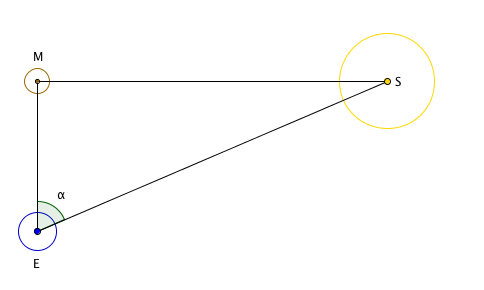 You can convince yourself of this by imagining the Sun in different places in the diagram above and checking that the parallel rays of light emanating from it illuminate exactly half of the Moon (as seen from Earth) only when there is a right angle at M.

is the distance from the Earth to the Sun and

is the distance from the Earth to the Moon. If you know your trigonometry you know that

is the angle at the corner

of the triangle. Therefore

So the Sun is just short of 400 times further from Earth than the Moon. Aristarchus also noticed that during a solar eclipse the Moon completely covers the Sun. This gives us the following diagram:

Using the fact that the ratio between

(because we are looking at two similar triangles) we can deduce that the Sun’s diameter is about 400 times bigger than the Moon’s diameter.

The result Aristarchus came up with was very different. He estimated the Sun to be between 18 and 20 times further away than the Moon. This is partly because he didn’t have the means to measure

accurately enough and took it to be equal to

Using this value in the calculation above gives that the Sun is about 19 times further away than the Moon: a small variation in an angle

leads to a large variation in

The reason why Aristarchus could only come up with the range from 18 to 20, rather than a single number, is that trigonometry hadn’t been developed yet. He didn’t have the notion of a cosine, let alone any tables in which to look up the cosine of a given angle. Instead, he had to use a more complicated geometric argument to come up with his approximate answer. Which illustrates why trigonometry is so useful for astronomers.

Please can you explain why

The diagram is not drawn to

The diagram is not drawn to scale, which is why the angle alpha in it doesn't reflect the angle you would observe in reality.

The value 89.5 degrees comes from observation.

How to know the angle is 90 degrees

That might not make sense right away, but study the unit circle and you'll get it!!

Since the sun is very far away, the rays from the sun will be almost parallel to both the earth and the sun. So this means the angle of rays between the sun and the moon will be very small. Given the moon is perpendicular to the earth, we have 90 deg on that angle. Since the angles of a triangle add up to 180 deg, the remaining angle is very close to 90 deg, so 89.5 is a good approximation. (It could be 89.8 or 89.7) The result will be similar.

In angles very close to 90 degrees, a small error can make a very large difference. If the angle was really 89.8 degrees, the result would be very far from the result with 89.5 degrees.

Triangle of sun and moon and earth