Taking on a 10-D Universe with 8-D maths

This article first appeared on the FQXi community website, which does for physics and cosmology what Plus does for maths: provide the public with a deeper understanding of known and future discoveries in these areas, and their potential implications for our worldview. FQXi are our partners in our Science fiction, science fact project, which asked you to nominate questions from the frontiers of physics you'd like to have answered. This article addresses the question "How many dimensions are there?". Click here to see other articles on the topic. 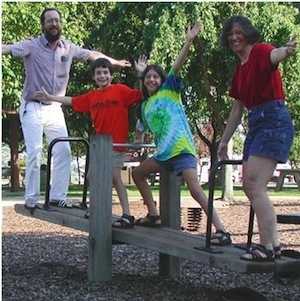 Ask Tevian Dray and Corinne Manogue what it is like to be a married couple working towards a unified theory of fundamental particles and they'll tell you to ask their children. "They have been known to complain about the dinner-table conversation," says Dray.

Manogue puts it in context: "Tevian is very much the mathematician and I'm very much the physicist. I have a tendency to see the physics that we are striving for, but through a glass, darkly," she says. "I have some sense of where we want to go, but it is cloudy, and kind of befuddled. The first thing that happens is I say, 'we want to do this.' His reaction is, 'I have no idea what you are saying.' And so we go through a very tumultuous period, where he is trying to get me to articulate clearly enough what I mean so that he can do the mathematics. It's typically a loud and frustrating time. At the dinner table, most often."

Together Dray and Manogue are trying to tackle a profound question in physics: Why is our Universe described so well by the standard model of particle physics? The standard model works in four dimensions—three of space and one of time—and has been extremely successful at explaining how elementary particles interact with each other. And yet there are vagaries that the standard model can't make sense of, such as why these particles have the masses that they do, or why they group together in families of three with similar properties, but different masses. Dray and Manogue, who are both at Oregon State University in Corvallis, are convinced that the answer lies in the mathematics of higher dimensions—no less than ten dimensions, in fact.

If the idea that the Universe contains ten dimensions sounds familiar, it's because it's often bandied about by string theorists. In the mid-1980s, superstring theory was going through a revolution. Physicists had developed equations to describe fundamental particles as strings vibrating in ten dimensions. But these equations were extremely difficult to solve. At the time, Manogue was working with David Fairlie of Durham University in the UK, and together they realised that a bizarre system of numbers, called the octonions, could come to the rescue. (You can read more about string theory in String theory: From Newton to Einstein and beyond.)

In the standard model, particles can be split into fermions, which make up matter, and bosons, which are associated with the fundamental forces of nature. Fairlie discovered that octonions are handy for writing out the equations for how bosons move. Working with Fairlie and with Anthony Sudbury of the University of York, UK, Manogue later discovered that the very same octonions could also be used to describe the behavior of fermions. 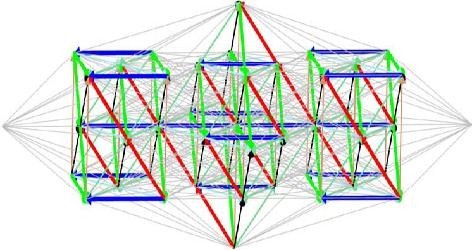 Spot the quark – the geometric structure F4 could one day help us visualise how the eight-dimensional octonions describe quarks in our 4-D world.

Using octonions, Manogue and Dray can now describe the electrons and their cousins, the muons and tau particles, and also the neutrinos in ten dimensions. It's a fantastic achievement, but Dray emphasises that there's still a long way to go. "What we cannot do in our language at all is have them do anything other than sit there," says Dray. "If I stand up in front of a physics audience and say, 'here's my electron, and by the way, I don't yet even know how it interacts with electric fields,' I'll get laughed at."

That's exactly the objection that Fairlie raises about the work. "There is no answer to questions of particle interactions," he says. He points out that the peculiar mathematics of octonions introduces new problems. In particular, octonions are non-associative. However, all known physical processes are associative, so using octonions to characterise particle interactions will be tricky, Fairlie says.

Despite this stumbling block, Manogue and Dray continue to plug away. They have used their octonions to encode the momentum and spin properties of these particles, explain why neutrinos are "left-handed" (that is, why the neutrinos' spins are always oriented in one particular sense relative to the direction in which they move and never in the opposite sense), and even provide clues to why the particles cluster into families of three. These properties seem to be inherent in the language of octonions.

"Dray and Manogue are among the few really good physicists who think hard about the octonions and what they might mean for physics," says John Baez, a mathematical physicist at the University of California, Riverside. "As far as I'm concerned, these questions remain mysteries. But Dray and Manogue have found some tantalizing clues."

Their ultimate goal is to show that the standard model is just a natural consequence of describing the fundamental particles in ten dimensions. It if works, octonions could also help solve one of the biggest puzzles facing string theorists: How their hypothetical six extra dimensions of space are folded up so that we only experience four-dimensions in our Universe.

Currently, string theorists have an infinity of possibilities for how this folding might happen. But Manogue and Dray have discovered that choosing one particular octonion to focus on from their arsenal, while neglecting the rest, "collapses" the ten dimensions down to four dimensions, in a simple way. Interestingly, it doesn't matter which octonion you choose, you always end up with a working four-dimensional Universe. "If this octonionic stuff is right, it tells you uniquely what to do with the extra dimensions and how to handle them," says Manogue.

Octonions may also be hinting at another deep truth about the structure of the Universe. In ten dimensions, octonions can be used to describe a particle's momentum, but not its position. But after the description is collapsed down from ten to four dimensions, particles can be described in both ways. This may suggest that space-time isn't a fundamental property of the Universe, but only emerges in its four-dimensional description. "That would be incredibly profound, I think," says Manogue.