New simulations reveal that turbulence created by jets of material ejected from the Universe's largest black holes can stop stars from forming. Evan Scannapieco, of Arizona State University (ASU) and Marcus Brüggen of Jacobs University in Bremen, Germany, present a new model in a paper to be published in the journal Monthly Notices of the Royal Astronomical Society. 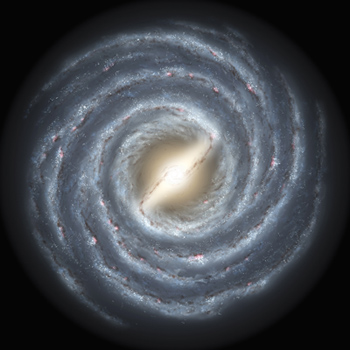 Artist's impression of the Milky Way, home of our solar system and part of the Virgo Supercluster. Image courtesy NASA Jet Propulsion Laboratory.

We live in a hierarchical Universe: the Earth is a planet in our solar system, the solar system resides in the Milky Way Galaxy, and galaxies combine into groups and clusters. Clusters are the largest structures in the Universe, but sadly we know little about them.While researchers have long known that the gas in the centres of some galaxy clusters is rapidly cooling and condensing, they were puzzled why this condensed gas did not form into stars. Until recently, no model existed that successfully explained how this was possible.

At the core of each of these clusters is a black hole, billions of times more massive than the Sun. Some of the cooling medium makes its way down to a dense disc surrounding this black hole, some of it goes into the black hole itself, and some of it is shot outward. X-ray images clearly show jet-like bursts of ejected material, which occur in regular cycles.

But why are these outbursts so regular? And why does the cooling gas never drop to colder temperatures that lead to the formation of stars? Some unknown mechanism is creating an impressive balancing act. "It looked like the jets coming from black holes were somehow responsible for stopping the cooling," says Scannapieco, "but until now no one was able to determine how exactly."

Scannapieco and Brüggen used the enormous supercomputers at ASU to develop their own three-dimensional simulation of the galaxy cluster surrounding one of the Universe's biggest black holes. Their simulation included a component modelling the effects of turbulence, which had never been accounted for in the past. Turbulence, by its very nature, is extremely complex, and so simulating it directly is no easy task. But Scannapieco and Brüggen adapted an approach developed by Guy Dimonte at Los Alamos National Laboratory and Robert Tipton at Lawrence Livermore National Laboratory, which uses a set of differential equations. They work showed that turbulence is a key ingredient in the galactic processes.

"When you have turbulent flow, you have random motions on all scales," explains Scannapieco. "Each jet of material ejected from the disc creates turbulence that mixes everything together." Every time some cool gas (shown in blue in the simulation on the right) reaches the black hole, it is shot out in a jet (shown in red and yellow). This generates turbulence that mixes the hot gas with the cold gas. The mixture becomes so hot that it doesn't accrete onto the black hole. The jet stops and there is nothing to drive the turbulence, so it fades away. At that point, the hot gas no longer mixes with the cold gas, so the centre of the cluster cools, and more gas makes its way down to the black hole. Before long, another jet forms and the gas is once again mixed together.

Thus, turbulence works in partnership with the black hole to maintain the balance. Without the turbulence, the jets coming from around the black hole would grow stronger and stronger, and the gas would cool catastrophically into a swarm of new stars. When turbulence is accounted for, the black hole not only balances the cooling, but goes through regular cycles of activity. "We improved our simulations so that they could capture those tiny turbulent motions," says Scannapieco. "Even though we can't see them, we can estimate what they would do. The time it takes for the turbulence to decay away is exactly the same amount of time observed between the outbursts."

You can read Scannapieco and Brüggen's paper, Self-regulation of AGN in galaxy clusters on arXiv.org.

To find out more about the mathematics of turbulence, read the Plus articles

Or look at the Plus archive.