What is a square?

Hannah Darken and the Plus Team Share this page

What is a square? It's a shape that has four straight sides of equal length and four angles of 90 degrees. 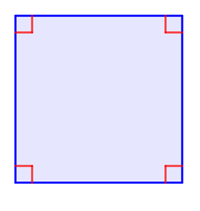 An honest square: it has four straight sides of equal length and four 90 degree angles

The two-dimensional, flat surface we usually do our geometry on at school is known as the Euclidean plane. It is true that on this plane, any closed, straight-sided figure whose sides are all the same length and whose interior angles are all right angles must have four sides — it must be a square. However, there are different types of surfaces which can be described using the notion of curvature. What happens if you change the curvature of the plane? Will the number of sides of the shape change?

How curvy is curvy?

The Euclidean plane has zero constant curvature at every point, as you'd probably expect: the plane isn't curvy, so it should have zero curvature. A sphere has positive Gaussian curvature at every point. Intuitively that's because it "curves outwards" in all directions. If you sat yourself down at any given point on the sphere, you'd see the sphere curving downwards away from your bottom in all directions. 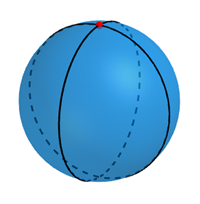 An sphere has positive curvature at every point. If you sat yourself down at a point, for example the red one in the figure, and looked down, you'd see the sphere curving downwards in all directions. Technically, the two black lines in the figure give the principal curvatures of the sphere at the point, which in this case are both positive. The Gaussian curvature is the product of the principal curvatures, which in this case is also positive. See this article to find out more.

Something very different would happen if you sat yourself down on a saddle shape, as if you were on a horse. If you looked down your legs, you'd see the surface curving downwards away from your bottom. But if you looked down right in front of you or right behind you, you'd see the surface curving upwards towards your head. This "opposite curving", intuitively, is what characterises negative curvature. 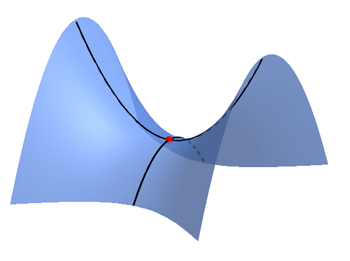 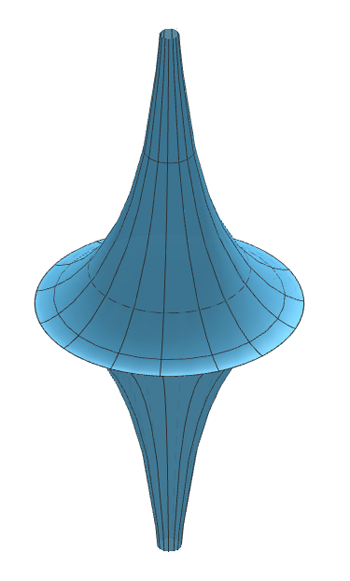 A piece of a pseudosphere, which has constant negative curvature. The actual pseudosphere continues indefinitely in both vertical directions. Technical note: The pseudosphere is a partial model of hyperbolic geometry.

Shapes on a sphere

So how many sides can shapes with straight sides and 90 degree angles between the sides have on these surfaces? 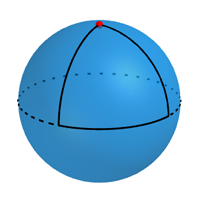 A spherical triangle with 90 degree angles and sides of equal length.

What we have created here is a straight-sided shape whose sides all have the same length and meet in 90 degree angles — and it has three sides, not four! This also illustrates that the angles of a triangle drawn on a shape with positive curvature add up to more than 180 degrees (which is the case in the plane). In our example, they add up to 90+90+90=270 degrees.

On the sphere we can even draw a two-sided shape whose sides have the same length and meet at 90 degree angles. One side consist of half a great circle, and the other of one half of the great circle that's at right angles to the original one. Such a shape is called a digon.

Each of the four wedges cut out of the sphere by two perpendicular great circles is a digon. 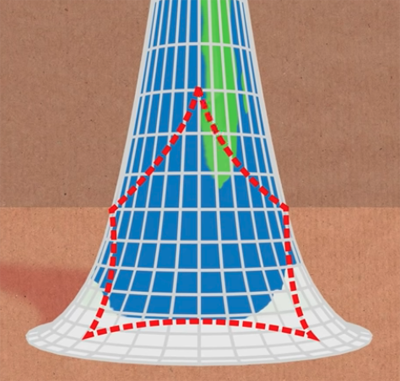 This five-sided shape drawn on the pseudosphere has straight sides of equal length and 90 degree angles. (We only show the top part of the pseudosphere here as it's sufficient for the illustration.) The image is taken from the Numberphile video 5-sided square, on which this article is based.

Although the sides of the five-sided shape look curved to us, they are straight in the sense that they're segments of geodesics: lines of shortest distance on the pseudosphere. And as it turns out, they are all the same length.

So, if you thought that 90 degree angles and straight sides of the same length define a square, then think again. It all depends on the curvature!

Can you draw such shapes with six, seven, eight, or even more sides? We leave that up to you to find out. 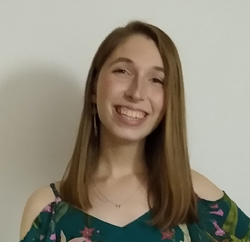 This article is based on the Numberphile video 5-sided square which you can see below.

Hannah Darken is a 19-year-old student from Liverpool. Hannah initially wrote this article while she was studying for her A-Levels at the University of Liverpool Maths School (ULMaS). She is currently in her first year reading mathematics at Lancaster University.

Question about Geometry of triangles

An accute-angled triangle has its vertices laying on three orthogonal axes. Where is there material about solving for the area of this triangle, when we know the distance from the origin of these intersection points?