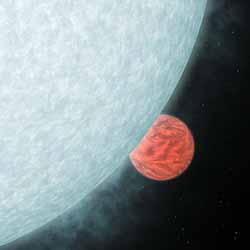 An artist's impression of a star with its planet. Image courtesy of NASA

Extrasolar planets have been grabbing the headlines for the last few weeks. First there came news of two American research teams having detected infrared light from two distant planets, using NASA's Spitzer Space Telescope. This was followed by a German team's sensational and disputed claim to have taken the first ever direct picture of an extrasolar planet orbiting a sun-like star.

Planets that do not belong to our own solar system are notoriously difficult to spot because the glare from the star they orbit usually outshines their own reflected glow. But the three "new worlds" share a common feature: they are hot and therefore easier to detect because they emit infrared light.

In the first development two different teams, one at a NASA centre in Maryland and one at the Harvard-Smithsonian Centre for Astrophysics in Cambridge, Massachusetts, detected infrared light coming from two extrasolar planets that go by the charming names of HD209458b and TrES-1. In both instances, the researchers measured the change in infrared light emitted as the planets pass in front of and behind their respective star.

Both planets are what is called "Hot Jupiters": massive planets that are very close to their stars and orbit them in only a few days. Although astronomers had already established the existence of both planets by indirect methods, this new development was hailed a huge breakthrough. As one researcher put it, anyone would like to see the "distant glow of alien worlds", but also an analysis of the recorded infrared light may give more information about the planets' chemical and physical makeup.

Hot on the heels of this development came the release of an image captured by Ralph Neuhäuser and his team at the University of Jena in Germany. It clearly shows the star GQLupi in the constellation Lupus, about 400 light years away from Earth. Next to it there is a darker object which, the scientists hope, is its planet. This, however, has been received with scepticism by some scientists.

Neuhäuser included GQLupi in his planet hunting-project because it is very young, and youth, in astronomical terms at least, implies heat and brightness. Young stars and their planets are still contracting, thereby generating gravitational energy which is dispersed as infrared light. 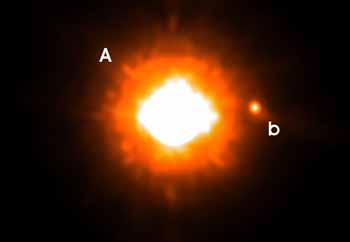 The star GQLupi (A) with its alleged planet (b)

The distance between GQLupi and its dark companion is estimated to be 100 times that between the earth and the sun. This means that it would take the alleged planet about 1200 years to orbit its star, and thus any hope of seeing GQLupi dim as the planet moves across it goes out of the window.

So how do we know that the object in question is not just a more distant star which happens to be visible in the same area as GQLupi? And even if it does orbit GQLupi, how do we know it is a planet, and not just any old bit of space junk? Come to think of it, what makes a planet a planet?

In answer to the first question, Neuhäuser says that according to his measurements, the two objects have stayed roughly the same distance apart since 1999, when the first image of the two was taken. He believes this to be very strong evidence that they do indeed move through space together.

The other two questions are harder to answer. A planet orbits a star but is not a star itself, that is, it does not produce energy through the process of nuclear fusion. Nuclear fusion can only occur in objects with more than about 10 to 16 times the mass of Jupiter, so a planet's mass should be well below that range. However, we want to distinguish between planets and mere asteroids so we require planets not to have too little mass either.

Neuhäuser's main task, then, was to establish that the mass of GQLupi's companion is well within the permitted limits. His team used their observed data to establishe the companion's luminosity (brightness), temperature and gravitational force. They then employed two distinct theories, one modelling the origin of objects in space and one modelling their atmosphere, to estimate the companion's mass to be about twice that of Jupiter. This would indeed make GQLupi's dark escort a planet, but, by Neuhäuser's own admission, the theoretical nature of the models used leave his findings open to disagreement.

Disagreement, of course, is never long to follow. Mark McCaughrean from the University of Exeter, expressed grave doubts concerning the mass calculations, as well as the assumption that the two objects are bound together by gravity.

Whatever GQLupi's mysterious friend - if a friend it is - turns out to be, let's not forget that astronomers know about around 130 other extrasolar planets. You might ask how this is possible since we cannot see any. A planet exerts a gravitational pull on its star, causing the star to wobble slightly in its path. If the wobble is side-to-side it can be spotted directly, using a powerful telescope. A front-to-back wobble can be detected by observing the wavelength of the light emitted by the star: if it moves away from us the waves will become longer, shifting into the red region of the spectrum, and if it moves towards us they will become shorter, shifting into the blue region. This phenomenon is known as a Doppler shift. If either of these show up a periodic wobble in the star's path, or if the brightness of the star periodically dims, then there is strong evidence that a planet exists. Unfortunately, these methods say little more about the planets other than that they are there, hence the enthusiasm with which the new developments were received.

A final remark to all you alien hunters out there: yes, two planets mentioned in this article are believed to have water in their atmosphere, and yes, they are potentially similar to Earth. One of their inhabitants might be staring at you right now.