The famous physicist Freeman Dyson died on February 28, 2020 in Princeton, USA, aged 96. Dyson made fundamental contributions to a huge range of areas, from particle physics to nuclear disarmament. Robbert Dijkgraaf, Director of the Institute of Advanced Study in Princeton, called him an "architect of modern particle physics, free-range mathematician, advocate of space travel, astrobiology and disarmament, futurist, eternal graduate student, rebel to many preconceived ideas including his own, thoughtful essayist, all the time a wise observer of the human scene." 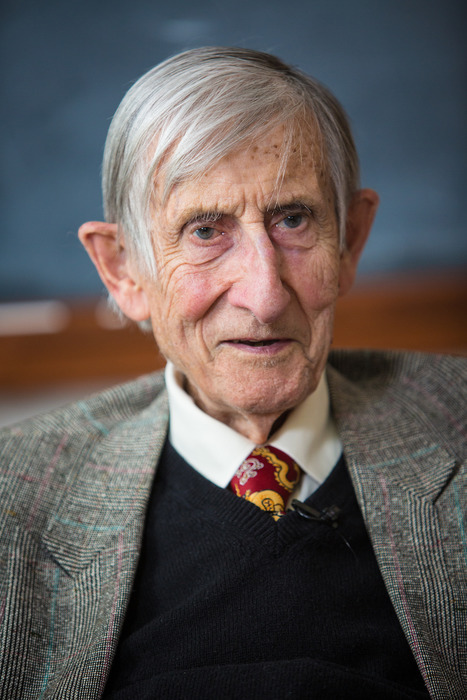 Dyson began his academic career at the home of Plus, the University of Cambridge. He arrived there as a student in 1941, right in the middle of WWII. Dyson was interested in physics and applied maths, but circumstances delivered him into the hands of the some of the purest mathematicians around at the time.

"All the applied [mathematicians] were away fighting the war so there was essentially no physics going on," he told us in an interview in 2013. "But there were these very famous pure mathematicians — such as G. H. Hardy and John Littlewood — whom I had all to myself. It was a wonderful time to be a student with these big famous mathematicians around. They had hardly any students so I got to know them all and became, for the time being, a pure mathematician."

Dyson didn't lose his interest in physics though, and it was because of his contributions to particle physics that he first rose to scientific stardom. At Cambridge he got to know Nicholas Kemmer who gave him a copy of a book he still had in 2013 and described to us as "his bible": Gregor Wentzel's Quantum theory of fields (in the original German). Quantum field theory (QFT) was a mathematical language devised to describe the fundamental particles of nature and Dyson learnt all there was to know about it from Kemmer and the book.

In 1947 Dyson took this knowledge on board the Queen Elizabeth and journeyed to the USA. On arrival he was met with scepticism. "America was very empirical, nobody had heard of this stuff," he told us. "They considered it a sort of Italian opera — extravagant and irrational entertainment — they didn't consider it useful. So I came to America as a student and was then the teacher, teaching all these famous people, Hans Bethe and Richard Feynman, about quantum field theory."

The skepticism Dyson encountered was justified. On the one hand quantum field theory made some esoteric predictions. It implied that particles, such as photons or electrons, would be constantly created out of nothing, popping in and out of existence like bubbles in a bubble bath. During their briefest of lifetimes these virtual particles would affect other particles and their interactions. In fact, the electrostatic repulsion between two like charges was explained in this way: an electron would emit a virtual photon which would in turn be absorbed by another electron, the interaction pushing the two particles apart.

On the other hand the mathematics of the theory was in deep trouble. Almost any calculation you might care to make in quantum electrodynamics (QED) (the theory developed to describe the interaction of matter and light) returned infinity as an answer — for all practical purposes the theory was useless.

Weird as it may be, the prediction of virtual particles was confirmed by experiments at Columbia University the same year that Dyson arrived in the US. The race was now on to sort out the theory. "All the giants from the old times were still around, people like Werner Heisenberg and Erwin Schrödinger and Paul Dirac and Robert Oppenheimer," remembers Dyson. "[They] all thought that we needed radically new physics. They all had their theories of changing the whole basis of physics, introducing completely new ideas."

Indeed, it turned out the "unholy mess" that was QED could be rescued and Dyson was instrumental in this. Julian Schwinger working in the US and, independently, Sin-itiro Tomonaga in Japan, came up with the first step by cracking the calculations that exactly described experimental observations. The legendary Richard Feynman then produced a stroke of genius: he came up with stick-like figures now known as Feynman diagrams to replace hair-raisingly complex equations. These brilliant pictures have now become standard weapons in any physicist's armour. This image is a Feynman diagram of electron-electron scattering.

"Feynman was a great guy," Dyson recalled at our interview. "The joy of Feynman was that he was totally outspoken. He always said exactly what he thought about you or about anything else. If I wanted to go and talk with Feynman, I would walk into the room and he would say 'Get out, don't you see I'm busy.' Another time I'd come in and he would be very friendly, so I'd know that he really welcomed me. I enjoyed him very much because he was a real performer. He just loved to perform and he had to have an audience."

Feynman's intuitive approach was brilliant, but initially it was also flakey. When Feynman first presented his diagrams at a conference, the audience wasn't impressed. He wasn't able to explain exactly how the straight and wriggly lines should be translated into equations and show that his pictures didn't obscure more complicated situations.

There was also another problem. The approaches developed initially were only able to tame the infinities in calculations that involved one or two virtual particles. It wasn't clear the methods would work for greater numbers. It was Freeman Dyson who came to the rescue. Armed with a mathematician's understanding of the techniques of quantum physics, he showed that the approach of Feynman, Schwinger and Tomonaga would work for any number of virtual particles. "I had only the tools of quantum field theory, which [others] didn't have," says Dyson. "I was able to put them all together and demonstrate it was all quite simple. It was really an amazing piece of luck. From being a humble student, I suddenly became a big shot."

In 1965 Feynman, Schwinger and Tomonaga were jointly awarded the Nobel Prize in Physics for their work on QED.

Dyson was only in his twenties when he sorted out QED and a full career still lay ahead of him. Among other things, he has worked on nuclear physics, becoming involved in a project to design a safe nuclear reactor and campaigning against nuclear testing, and on astrobiology, the science that considers the origins and future of life in the Universe. He has won countless awards and has also written a host of books and essays for a general audience. "I have found [...] that the art of weaving sentences into a story can be as creative as the art of weaving ideas into a theorem," he is reported to have said.

When we met Dyson in 2013 it was at his permanent academic home, the Institute of Advanced Study (IAS) in Princeton. He was already 89 then and told us the IAS had agreed to let him stay "as long as I can make it up the stairs". Scrambling up a chair to get his "bible" from the shelf, and under the table to tidy up papers, he didn't strike us as particularly fragile physically, and in terms of imagination, humour and curiosity he could have easily beaten a twenty-year-old.

We asked Dyson where he thought great ideas come from. "Our brains are random, that's of course nature's trick for being creative," he answered. "That's how our minds turn out to be so powerful: they don't have to be programmed, they can invent things just by random chance. I think that's where [great ideas] come from. All really good ideas are accidental. There's some random arrangement of things buzzing around in somebody's head, and it suddenly clicks."

Meeting such a warm-hearted and generous legend of physics has definitely been a highlight of our careers.