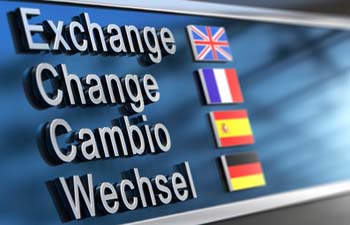 If you are familiar with electromagnetism all this will make sense to you. If not, just stick with the analogy: the presence of a magnetic field corresponds to a configuration of potentials (exchange rates) that enable an electron to become richer (with the gain related to the magnetic field in the area) and will therefore set the electrons moving.

In physics we imagine that this story about countries and exchange rates is happening at very, very short distances, much shorter than the ones we can measure today. When we look at any physical system, even empty space, we are looking at all these countries from very far away, so that they look like a continuum. See the figure below. When an electron is moving in the vacuum it is seamlessly moving from a point in spacetime to the next. In the very microscopic description, it would be constantly changing between the different countries, changing the money it is carrying, and becoming "richer" in the process. (In physics we do not know whether there is an underlying discrete structure like the countries we have described. However, when we do computations in gauge theories we often assume a discrete structure like this one and then take the continuum limit when all the countries are very close to each other.)

Here we display the grid of countries at various scales. We are zooming out as we move to the right. If we zoom out sufficiently we can view the whole grid as a continuum.

The gauge symmetry of electromagnetism is a little different from the one in the economic model, which was about dividing or multiplying by a given factor. The "currency" of electromagnetism isn't described by numbers that lie along the number line, but by points that lie on a circle. Each "country" (point in spacetime) chooses a starting point on its personal circle — that's its base point. The value of any other point P on the circle is given by the angle defined by P, the base point and the centre of the circle. Each country could at any time decide to simply rotate its circle, moving its base point somewhere else. All charged objects sit somewhere along this circle. If the origin is changed, so are their nominal positions. 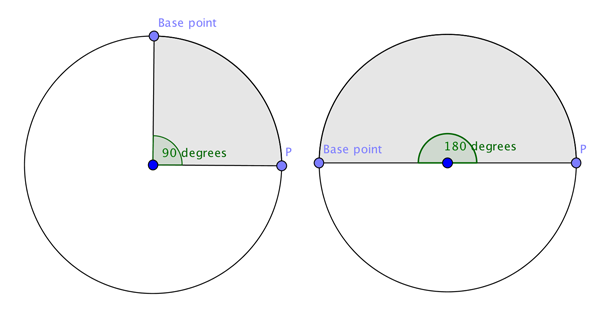 Each point in spacetime "picks" a base point on the circle with respect to which it measures angles. Rotations of the circle are gauge symmetries.

The exchange rate between two countries is simply the angle through which you'd have to rotate the first country's circle to move its base point to the location of the second country's base point.

We can picture all this by imagining a little circle for every point (country) in spacetime: 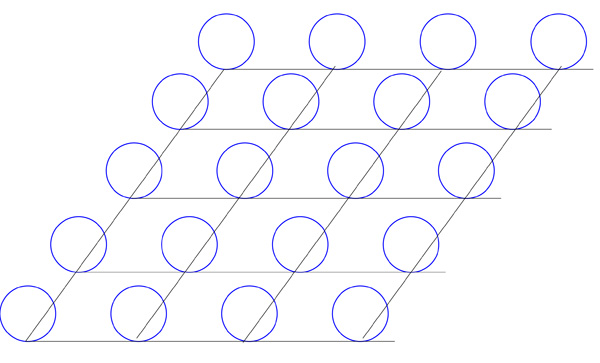 The electromagnetic interaction has the same symmetries as a configuration where we have a circle at each point of space. Here each space point is where the black lines intersect. We can think of the circle as an extra dimension.

If this little circle really exists, then this would mean that we need an extra dimension. Unlike our picture above, which is a two-dimensional simplification, the space we perceive is three-dimensional. If for each point there really is a little circle that does not live in any of the three spatial dimensions, then there needs to be a fourth dimension for it to exist in. However, we do not know whether this circle is real. We do not know if indeed there is an extra dimension. All we know is that the symmetry of the theory is similar to the symmetry we would have if there was an extra dimension. In physics we like to make as few assumptions as possible. An extra dimension is not a necessary assumption, only the symmetry is. Also the only relevant quantities are the magnetic potentials which tell us how the position of a particle in the extra circle changes as we go from one point in spacetime to its neighbour.

In electromagnetism the electric and magnetic fields obey some equations, the so-called Maxwell equations. In the economic model this would be analogous to a requirement on the exchange rates.

If this happened in the real world, the bank adjusts the exchange rate so that fewer speculators want to buy Dollars. In fact, if we assume that the number of speculators following a particular circuit is proportional to the gain that they will have along this circle, then we find that the condition for banks not to run out of either of the currencies, or that the net flow of money across each bridge is zero, is equivalent to Maxwell's equations. The mathematically inclined reader can find the derivation in the appendix.

Let's summarise all of this. Particles, such as electrons and positrons, can be thought of as travellers moving through a grid of countries. The electromagnetic field determines the exchange rates between the countries' currencies. The presence of a magnetic field is akin to a configuration of exchange rates that enables electrons to make money, and positrons to reduce their debt, which sets them in motion around a circuit. The total gain they make is related to the magnetic field. The whole thing is characterised by a gauge symmetry: points in spacetime define a "currency" and changing the currency makes no difference.

This is the economic analogy describing the gauge symmetry of the electromagnetic force. In the next article (link) we will move one to another of the fundamental forces: the weak force.